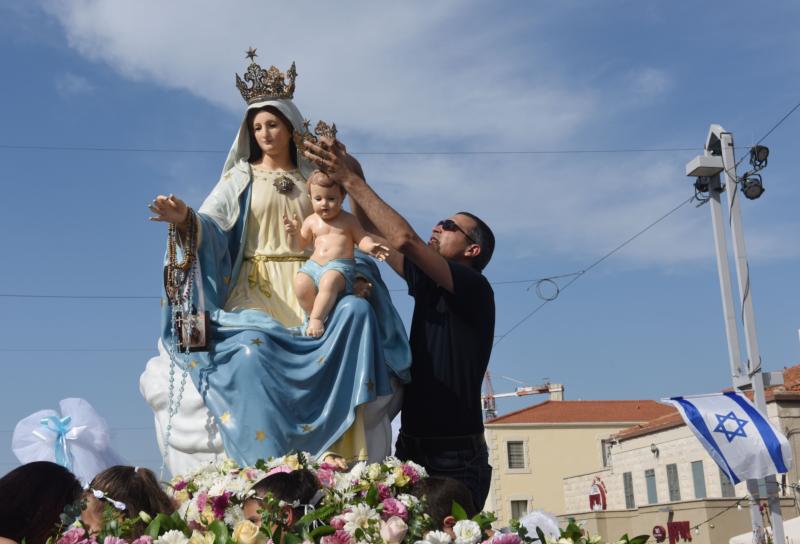 A worshipper touches the statue of Our Lady of Carmel and the Christ Child during a procession outside the Church of St. Joseph in Haifa, Israel, May 5, 2019. (CNS photo/Debbie Hill)

The May 5 observance of the centennial of the Our Lady of Carmel procession saw 10,000 local Christians join festivities that retrace the steps of the return of a statue of Mary from Haifa’s St. Joseph Church to the Discalced Carmelite Stella Maris monastery after the end of World War I.

The statue of Our Lady of Carmel left the hilltop monastery when the Carmelite monks were ordered to evacuate by Turkish soldiers in the war’s early months. The monks and the statue returned to the monastery on the first Sunday after Easter in 1919 in a festive procession, carried out in an act of thanksgiving to Our Lady of Carmel, who Haifa’s Christian residents believed protected the city during the war.

A flower-festooned float, the central piece of the procession, carried a replica of the statue. The scene attracted the attention of non-Christians as well.

This year’s celebration became all the more meaningful as cross-border attacks flared in early May between Gaza and Israel. The violence left four Israelis and 25 Palestinians dead. Many attending the procession prayed for a cessation of the fighting and for peace.

Although a cease-fire was put in place early May 6, Palestinian and Israeli politicians vowed that the battle was not over.

“We believe the Virgin Mary can protect everyone regardless of race, sex or religion,” said Marlene, 36, who asked that her last name not be used, as she hitched her 5-year-old daughter on her hip so she could see the float as it passed.

Marlene touched the float with her hand, brought it to her lips and then put her fingers on her daughter’s mouth as well as a symbol of a blessing. “This is a prayer for peace for all,” she said.

Parts of some of the city’s main thoroughfares were closed as the festive procession made its way to the upper city through cafe-lined streets as patrons watched from the comfort of shaded patios. Other people stood at the edge of the road to get a glimpse of the float that was pulled by rope by a dozen people; dozens more offered a hand.

Five children sat on the float, wearing white angel wings. A few looked a bit stunned by the surroundings as their parents walked alongside. Before the procession began, people climbed atop the float to place rosaries around the outstretched hands of the statue.

Leading the procession were Archbishop Pierbattista Pizzaballa, apostolic administrator of the Latin Patriarchate of Jerusalem, Archbishop Leopoldo Girelli, papal nuncio to Israel, Father Saverio Cannistra, superior general of the Order of Discalced Carmelites, who came from Rome, and Father Raymond Abdo, the provincial of the order, who traveled from Lebanon.

“I wait for this day the whole year,” said Sausan Musa, 55, of Gush Halav, Israel, as she staked her spot at the back of the float with seven other women. “I believe in the Virgin Mary. I come to pray for my family and for the whole country.”

Azar Chacour, 51, of Haifa, but whose family is among the internally displaced from the village of Biram, Israel, said he had been coming to the procession since he was an infant and now came with his daughter Dareen, 3.

Samia Ashqar, who came from Nazareth, noted that the three-hour trek to the Carmelite monastery in the upper part of Haifa was not an easy one. She said people came out of devotion and a desire to pray for peace, as they are asked to do by Mary.

“We are sacrificing ourselves, our energy, our time,” she said. “It is to encourage us to continue. One hundred years means we are here, we continue to remember our history and nobody can forget our history here.”

But for some of the young people, such as Rogeh Shihadi, 16, and his Muslim friend May, 15, the procession was a chance to spend time with friends, grab an ice cream cone and share a laugh as they huddled over their cellphones.

“I am Muslim, I am not Christian, but I believe in Mary,” said May, who declined to give her last name. “I’ve been coming here for years. But I enjoy this also, so I can hang out with my friends.” 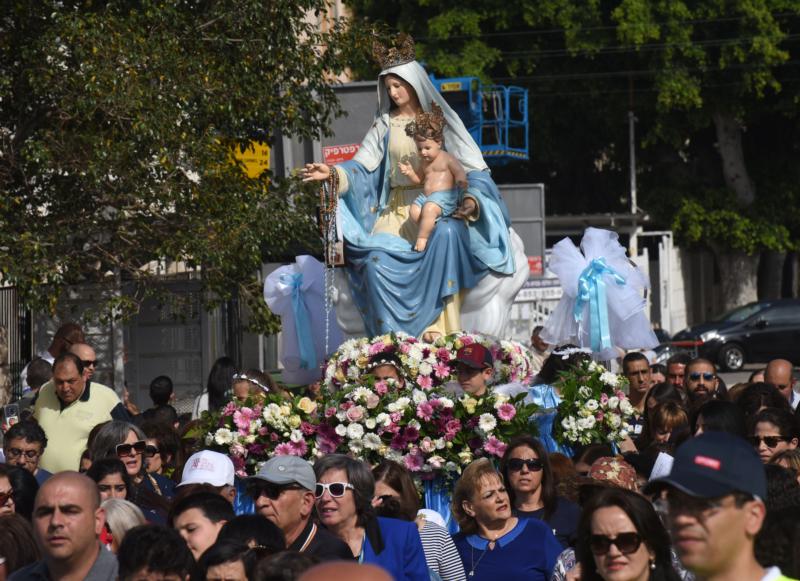 The statue of Our Lady of Carmel and the Christ Child are seen during a procession outside the Church of St. Joseph in Haifa, Israel, May 5, 2019. (CNS photo/Debbie Hill)