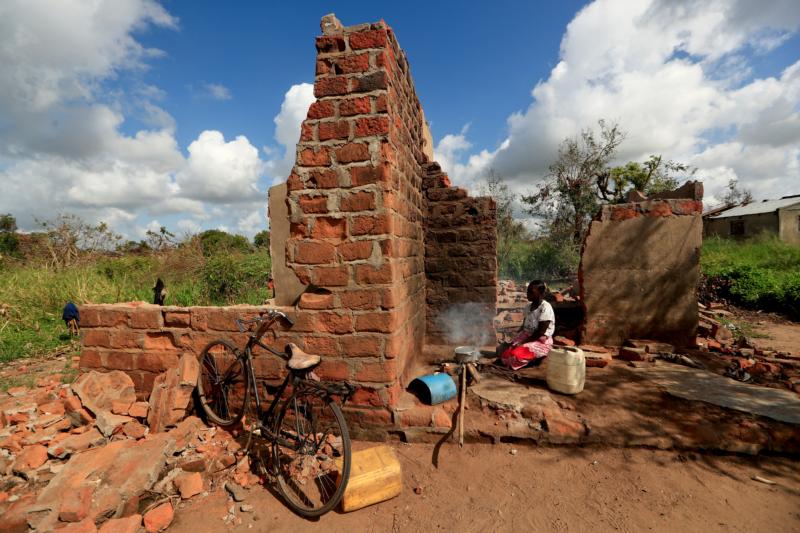 A woman cooks in the remains of her destroyed home in Cheia, Mozambique, April 10, 2019, in the aftermath of Cyclone Idai. (CNS photo/Zohra Bensemra, Reuters)

CAPE TOWN, South Africa (CNS) — Helping children who lost their parents when a pair of cyclones hit Mozambique is among the most difficult work in the aftermath, an aid worker said.

“It’s not easy to find the links” to these children’s relatives, said Martina Zavagli, country representative for the Association of Volunteers in International Service Foundation, or AVSI.

“Many children are alone” in the camps set up on land belonging to the Archdiocese of Beira, she said in a May 4 telephone interview.

The “trauma is enormous,” Zavagli explained, noting that the Italy-based Catholic foundation has social workers “who have been trained so they can help prepare the children in this very sensitive time.”

With high winds and torrential rain, Cyclone Kenneth made landfall in Mozambique’s northern region April 25, leaving at least 40 people dead out of the more than 240,000 affected.

Five weeks earlier, hundreds more died and tens of thousands had their homes and livelihoods destroyed when Cyclone Idai struck Mozambique before moving inland to Zimbabwe and Malawi. It made landfall near the port city of Beira and two of Mozambique’s major rivers overflowed their banks, submerging entire villages.

In total, an estimated 2 million people have been affected by the cyclones, with Idai considered one of the worst natural disasters to hit the southern hemisphere.

As with Idai, “villages have been flattened” in the wake of the second cyclone, the U.S. bishops’ Catholic Relief Services said in a statement.

“Roads have been washed out” and bridges destroyed, it said, noting the threat of water-borne diseases, such as cholera, typhoid and malaria “spreading quickly in the hardest-hit areas.”

Tens of thousands of people from villages in the areas that are below sea level need help to be resettled, said Leah Marie Lucas of Caritas Mozambique in Pemba, on the country’s northeastern coast. Most are fishing communities, she told Catholic News Service.

Mozambique is a long, narrow country of about 30 million people with a 1,500-mile coastline along the Indian Ocean.

With rising sea levels, which most scientists attribute to climate change, most people will never again be able to live in their old neighborhoods, Lucas said. Unable to return, people who fish and others have lost their livelihoods, she said.

Even when they know they have to, “it’s very difficult for people to leave their homes and communities,” she said. While Portuguese is Mozambique’s official language, “there are many cultural groups with different languages.”

These groups are tied to different religions, with a variety of food practices, dress codes “and other practices that show their distinct cultures,” she said.

In coordinating rescues and distributing aid, Caritas Mozambique and other Catholic groups have formed strong partnerships with their Muslim-based counterparts in Pemba, Lucas said.

With government, civil-society agencies and others, Caritas has organized volunteers who are helping with needs assessments and directing those in need to available resources, she said.

Maria Auxiliadora parish in Pemba, along with other church schools, housed more than 1,000 people of different faiths who fled the storms.

In the crisis, the church is managing “to receive everyone … Christians, Muslims and everybody else,” Father Ricardo Rosa Marques, parish priest, told the Associated Press.

“For us, it’s not important to know which religion a person may have,” it’s the person that matters, he said.

In Beira, Mozambique’s second-largest city, which was almost completely destroyed, “things were chaotic” in the camps for displaced people with “masses of people all in the same place,” Zavagli said.

The foundation established “child-friendly spaces” in the camps and is helping to protect women, she said. Women are open to abuse “if they get up in the dark to use the restroom, for example,” she said.

With “children now very far from the schools they were attending before” the storms’ destruction, teachers and parents in the camps are given materials to help with children’s learning, Zavagli said.

“We’re hoping that these efforts will help as people start going back” to areas where reconstruction of schools and other infrastructure has begun, she said.

Lucas noted that aid agencies, including Catholic relief groups, have a small amount of the funding required to address the needs effectively.

NEXT: Church workers: Venezuelan indigenous face some of greatest hardships