Periphery priest wants church to keep reaching out to the world 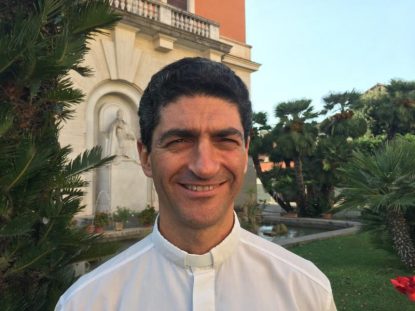 Father Augusto Zampini, a priest from Argentina who is director of development and faith at the Vatican’s Dicastery for Promoting Integral Human Development, is pictured in Rome Aug. 29, 2017. (CNS photo/Cindy Wooden)

VATICAN CITY (CNS) — From the poorest neighborhoods in Argentina to the seats of power around the world, Father Augusto Zampini said he has learned the value of Pope Francis’ constant admonition to be members of a church that always reaches out.

“This is a church that has no time to be self-centered,” said Father Zampini, who has been the director of development and faith at the Dicastery for Promoting Integral Human Development since its creation in 2016.

The focus on his Vatican work is on helping people face the challenges of poverty, climate change, economic inequality and injustice.

In an interview with Catholic News Service April 26, Father Zampini admitted that he was “not the usual suspect” to become a priest.

Before entering the seminary at age 27, Father Zampini studied international law in Argentina. After obtaining his law degree, he spent a year working at the Central Bank of Argentina and another three years at Baker McKenzie, a multinational law firm.

Ordained to the priesthood in 2004 for the Diocese of San Isidro, Argentina, one of Father Zampini’s first assignments was in a poor neighborhood on the outskirts of Buenos Aires. He described it as “one of the toughest neighborhoods in terms of violence.”

His neighbor was a professional kidnapper, he said, and he remembers having to move his bed away from the window, thinking “one day I might be killed” from a stray bullet.

Father Zampini’s parish provided space for the neighborhood’s children to come after school to study, play soccer or football and get something to eat.

The center, he said, had only three rules: no guns, no drugs, no alcohol.

Most of the time, the kids respected these rules, he said. But one day several children ran up to him, worried that another boy had a gun.

The priest confronted the boy, who ran out of the center, but came back 30 minutes later, saying, “Look, look … I have nothing!”

Father Zampini’s experience living and ministering amid so much poverty and violence caused him to change his interest from moral theology to social ethics.

“It is so unfair,” he said. “The percentage of these people likely to get out of that reality is very low. There’s something that we should be rethinking.”

Pursuing further education in the United Kingdom, he earned a master’s degree in “well-being and human development” and a doctorate in theology and then used his background in international law and social ethics while working as a theological adviser to CAFOD, the Catholic international development charity in England and Wales.

After Pope Francis published his ecology encyclical, “Laudato Si’, on Care for Our Common Home,” in 2015, Father Zampini went on the road to spread the document’s message in Sierra Leone, Ethiopia, Kenya, Colombia and Bangladesh.

The poor in those countries understood Pope Francis’ message perfectly, he said.

“You cannot understand ‘Laudato Si’ if you stay in a rich environment. You have to go out,” said Father Zampini, which is why he went to places “where poverty and climate change exist together.”

“If you are a pregnant woman on the coast of Bangladesh, you have to migrate” because rising sea levels are increasing freshwater salinity, which poses a real threat to human health, he said.

In Sierra Leone, he said, the water is so polluted that people must drink bottled water, but the country doesn’t have a recycling plant for plastic bottles, so “all these beautiful beaches are completely full of plastic bottles.”

And, of course, the poor don’t have the money to buy bottled water and are forced to drink polluted water, leading to illness and even death.

When the Dicastery for Promoting Integral Human Development was created in 2016, Father Zampini said his education and experience made him “a perfect fit.”

But a major drawback of working in the Roman Curia, Father Zampini said, is how little time it leaves for direct pastoral work.

Visiting communities, celebrating Mass and supporting people experiencing poverty, “that is your link to the people,” Father Zampini said.

Still, despite the piles of papers and folders stacked on the desk behind him, Father Zampini said it was a fascinating job with an excellent mission of linking faith and development.

“You need to know how to move in the world. Not every priest is prepared to do that,” he said. “Maybe that’s why God called me in my late 20s, not before.”

NEXT: Bishop calls on world to aid Somalis facing food shortages during drought