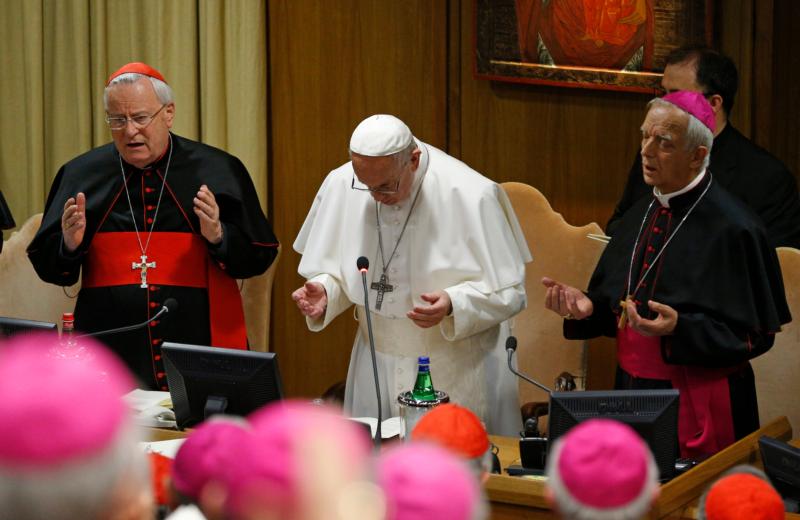 Pope Francis prays during the opening of the annual spring meeting of the Italian bishops’ conference at the Vatican May 20, 2019. Also pictured are Cardinal Gualtiero Bassetti of Perugia-Citta della Pieve, president of the conference, and Bishop Mario Meini of Fiesole, one of the vice presidents of the conference. (CNS photo/Paul Haring)

VATICAN CITY (CNS) — Pope Francis told the bishops of Italy that he was disappointed that so many of their dioceses had yet to implement the reforms he ordered to make the marriage annulment process quicker, more pastoral and less expensive.

“I am saddened to note that the reform, after more than four years, remains far from being applied in most Italian dioceses,” Pope Francis, the bishop of Rome, told other members of the Italian bishops’ conference.

The bishops were holding their annual spring meeting May 20-23 at the Vatican, and Pope Francis opened the gathering. He gave a short speech focused on “synodality” and collegiality, marriage tribunals and the relationship of bishops to their priests.

He spent about 20 minutes reading his prepared text, then reporters were asked to leave and the livestream of the meeting was cut so that the pope and bishops could converse in private.

In September 2015, Pope Francis issued two documents — “Mitis Iudex Dominus Iesus” (“The Lord Jesus, the Gentle Judge”) for the Latin-rite church and “Mitis et misericors Iesus,” (“The Meek and Merciful Jesus”) for the Eastern Catholic churches — reforming sections of canon law dealing with requests for the declaration of the nullity of a marriage.

The reforms — which do away with an automatic appeal of all decisions, charge diocesan bishops with responsibility for handling some cases and institute an abbreviated process for cases where the evidence is especially clear and uncontested — were meant to streamline the process and help couples in need of healing, the pope said.

Pope Francis also insisted in the documents that the annulment process be free of charge or as close to free as possible.

“This procedural reform is based on proximity and gratuity,” the pope told the bishops. “Proximity to wounded families means that the judgment, as far as possible, takes place within the diocesan church without delay and unnecessary extensions. And gratuity refers back to the Gospel mandate which says, ‘Without cost you have received; without cost you are to give.'”

Pope Francis said he hoped the reforms ordered in 2015 would find “their full and immediate application in all the dioceses” of the country.

The reforms, he said, aim to help dioceses demonstrate that “the church is mother and has at heart the good of her children, who in this case are wounded by a love that has been shattered.”

On the matter on relations between bishops and priests, Pope Francis said that relationship is the “backbone” that supports all relationships within a diocese.

“Unfortunately, some bishops have difficulty establishing a relationship with their priests, thereby running the risk of ruining their mission and weakening the mission of the church,” the pope said.

Pope Francis urged bishops to make sure that if one of their priests calls, he returns the call immediately or by the next day at the latest. “This way the priest will know he has a bishop who is a father.”

A bishop has an obligation to be close to his priests “without discrimination and without preferences or favoritism,” the pope said. “A true shepherd lives among his flock and knows how to listen to and welcome all without prejudice. We must not fall into the temptation of welcoming only priests who are nice or are flatterers.”

A bishop also must take care not to give assignments only to the eager and the “climbers,” ignoring those who are “introverts, meek, shy or problematic,” he said.

Many times today, the pope said, priests are disrespected, made fun of or “even condemned because of the errors or crimes of some of their colleagues,” so they need to be able to find support, encouragement and consolation from their bishop.

Saying he had heard rumors of possible plans for a synod for Italy, Pope Francis said the first step would be to review the “medical records” of the Italian church to ensure that laypeople, priests and bishops all recognize they have a shared responsibility for the life of the church.

PREVIOUS: Indian Jesuit accused of rape says he will appeal

NEXT: Former Jerusalem patriarch: Time to move away from war