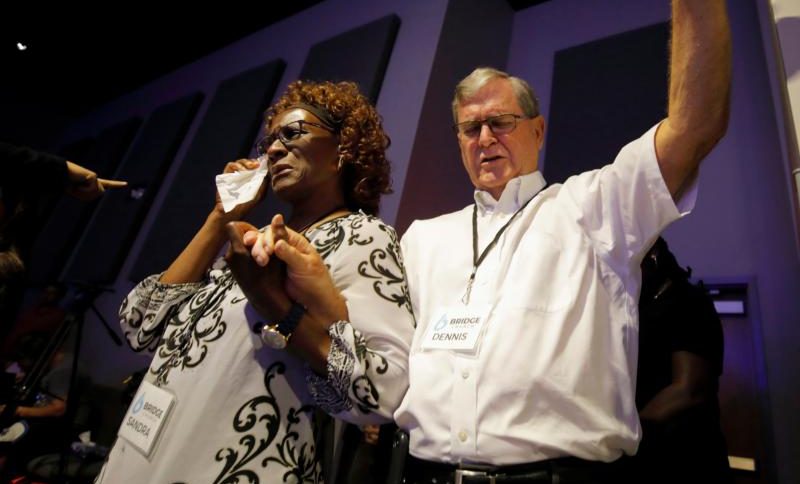 A man and woman react during a June 1, 2019, prayer vigil for the victims of a shooting at the municipal government complex in Virginia Beach, Va. In the wake of the May 31 mass shooting that left 12 people dead in Virginia Beach, the chairman of the U.S. bishops’ Committee on Domestic Justice and Human Development called for American society to examine why such violent incidents continue to occur. (CNS photo/Jonathan Drake, Reuters)

WASHINGTON (CNS) — In the wake of a mass shooting that left 12 people dead in Virginia Beach, Virginia, the chairman of the U.S. bishops’ Committee on Domestic Justice and Human Development called for American society to examine why such violent incidents continue to occur.

“This shooting reminds us yet again that something is fundamentally broken in our society and culture when ordinary workplaces can become scenes of violence and contempt for human life,” Bishop Frank J. Dewane of Venice, Florida, said in a statement June 1.

He said society must look at ways to “root out the causes of such evil.”

“Action is needed to attempt to reduce the frequency of these abhorrent acts through legislation and training. I call on Catholics around the country to pray for the dead and injured as well as for healing in the community,” Bishop Dewane said.

Authorities said that a 15-year employee of the city’s Department of Public Works entered a building in a municipal complex shortly after 4 p.m., May 31 and began shooting people. Twelve people died and six were injured in the mayhem, they said.

Police Chief James A. Cervera would not discuss a motive for the shooting, but said the employee, DeWayne Craddock, was still employed by the city at the time of the shooting.

All but one of those who died were city employees, officials said.

Virginia Beach police, Virginia State Police and FBI agents worked throughout the night to identify the victims, who were found on all three floors of one building in the complex.

Police responded soon after receiving reports of a gunman firing at people in the building and helped shepherd many to safety as others barricaded doors and hid under desks. Four police officers encountered the gunman in a building hallway, Cervera said late May 31, and engaged in a “long-term gun battle” before the assailant was shot.

Posts on the Virginia Beach website identified Craddock as an engineer who worked as a project manager and contact for utility projects.

City manager Dave Hansen said at a press conference that the victims “leave a void we will never be able to fill.”