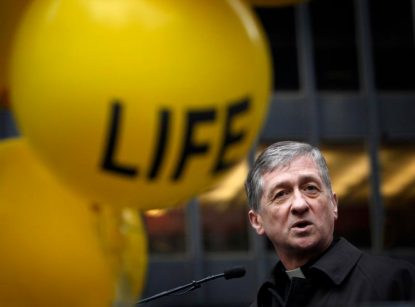 CHICAGO (CNS) — Chicago Cardinal Blase J. Cupich June 1 said the Illinois Senate’s passage of a bill “eliminating even minimal limitations on abortions under previous law marks a sad moment in our history as a state.”

“We have worked to make the case for a consistent approach to human dignity in Illinois and will continue to do so even as elected officials single out unborn persons for particular disregard,” he said in a statement.

“It remains our hope that Illinois will eventually distinguish itself as a safe place that welcomes not only those seeking a new life or second chance, but also the most vulnerable among us who deserve a chance at life,” he added.

Close to midnight May 31 in a 34-20 vote, the Senate passed the “misnamed ‘Reproductive Health Act,'” as the state’s Catholic bishops referred to it. The state House OK’d it May 28 in a 64-50 vote. The measure has now headed to the desk of Democratic Gov. J.B. Pritzker, who pledged to sign it.

Before and after the House vote and before the Senate vote, Cardinal Cupich, the bishops of Illinois’ five other dioceses and the Catholic Conference of Illinois decried the measure, calling it flawed and saying lawmakers rushed to get it passed before the end of the legislative session.

The state Catholic conference, which is the public policy arm of the state’s Catholic bishops, said it is “an extreme measure” that allows “for the abortion of unborn life at any stage of pregnancy and for any reason” and said the lawmakers’ approving it was “a grave tragedy and a collective moral failing.”

In a May 29 statement, the conference urged senators to reject the measure, which establishes “fundamental right” for women to get an abortion in Illinois, and asked them “to consider carefully what message a vote for this legislation sends to our people.”

In his June 1 statement, Cardinal Cupich said that women “have a real choice when they are given the support they need to bring their children into the world and parent them, supported by a society that truly values them.”

“We will give that support to all who seek it in the hope that by offering them a choice, we will build stronger families and a better Illinois,” he said.

He said that Catholic Charities and its partners provide such support, serving hundreds of young women and developing families every year.

“They nurture the mother and therefore the baby by providing classes in health and child development. They encourage the new families toward independence by providing childcare and making referrals for education, housing and employment,” Cardinal Cupich said.

He quoted a young woman who was served by a Catholic agency: “It was like a second family when I came here,” she said. “My doula (birth coach) took me to doctors’ appointments, explaining what all the papers and procedures meant, how my baby was developing, the changes my body was going through and how to eat and exercise to stay healthy.”

Cardinal Cupich said that today the young woman’s son “is thriving in the organization’s early childhood program and its family support program helps her stay on track with personal goals.”

The young mother will begin a bachelor’s degree program this summer, he noted.

With the “loving encouragement” Catholic agencies have provided to help her in her time of need, “she has turned stressful circumstances into a positive, hopeful future for herself and her son,” Cardinal Cupich added.

In its May 29 statement, the Catholic Conference of Illinois said it “will continue to make our case against such callous disregard for human life whenever it appears in society.”

The Catholic Church understands “the complex and difficult challenges facing women who have unplanned pregnancies or who carry babies destined to have short or difficult lives,” it said. “They deserve all the support society can give them.”

“But to deny that the lives growing within these women is anything other than human or that they would, in the vast majority of cases, develop into healthy children is simply to deny reality,” the conference added.