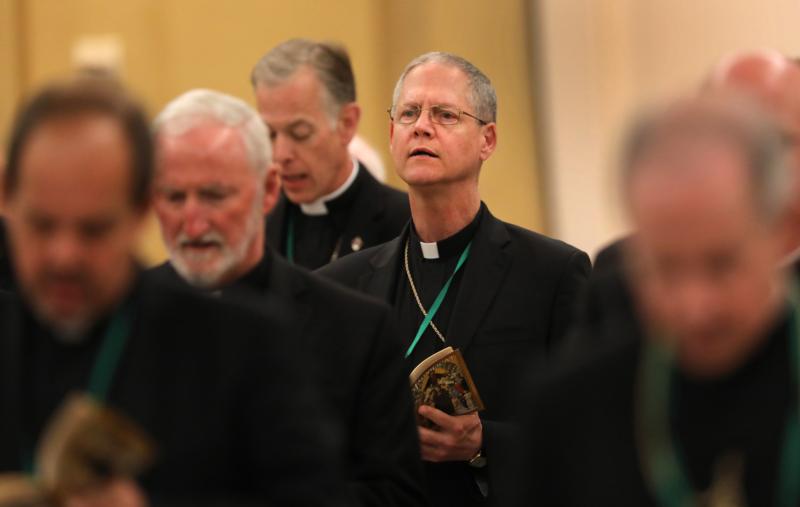 SEATTLE (CNS) — As the Catholic Church continues to grapple with the clergy abuse crisis and the failures of leadership, its members must face the issue but also move beyond anger, Archbishop Paul D. Etienne said in his homily at a June 7 Mass of reception for him as Seattle’s coadjutor.

He said the day’s Gospel reading, John 21:15-19, holds lessons for the faithful. In the passage, Christ asks Peter three times, “Do you love me?” Peter is hurt but responds three times that he does in fact love him. Three times Jesus tells Peter to take care of his sheep.

“My friends, Jesus’ love for Peter as intimately portrayed in the Gospel today,” the archbishop said, “is teaching us that we cannot allow ourselves to remain at surface level anger, disappointment and resentment about failures of leadership in the church today. Nor can we simply skirt the issue.”

He told the congregation that “Jesus did not allow his disappointment in Peter to cause him to abandon Peter, nor to abandon his plans for Peter.”

“Jesus did not let Peter’s failures stir anger and resentment within him, or if it did — Jesus moves beyond those surface emotions to the central question of love. And, in asking Peter if he loves him, Jesus clearly is not skirting the issue at hand, either,” he said.

Jesus is “actually expressing his love for Peter,” the archbishop added, and their conversation “is a moment of grace and healing to renew Peter for the ministry that is now his and the apostolic work that lies ahead.”

“My brother bishops, we need Jesus’ healing and his grace to renew us in our relationship with him, in our ministry, and for the mission and work that lies ahead,” Archbishop Etienne said.

One of the church’s highest priorities today, he told the congregation, is “to help people encounter Christ, to know him on an intimate and personal level; to hear his Gospel; to come to discover in Christ God’s intimate, personal love; and to come to faith in Jesus Christ.”

“Everything else follows that central priority,” he added.

About 1,000 people gathered at St. James Cathedral in Seattle for the Mass of reception for the coadjutor, including several members of his own family.

The liturgy began with Archbishop Christophe Pierre, apostolic nuncio to the United States, welcoming Archbishop Etienne and praising Archbishop Sartain for requesting a coadjutor. “It takes a lot of courage to ask for help,” Archbishop Pierre said.

Seattle’s archbishop had asked Pope Francis to appoint a coadjutor because of spinal problems he has suffered and that have required several surgeries.

Archbishop Etienne, who will be 60 June 15, had been in Anchorage since October 2016. Archbishop Sartain, 67, has led the Seattle Archdiocese since 2010.

The coadjutor told Massgoers: “Please know as I begin my ministry among you — and as one of you – I pledge to love you to the best of my ability with the love of Jesus as a demonstration of my love for the Lord. May Sts. Peter and Paul and our Blessed Mother intercede for all of us, that we may live the truth in love with and for each other.”

His final public Mass in Anchorage was celebrated May 29 at Our Lady of Guadalupe Church.

In his last column for the Catholic Anchor, Anchorage’s archdiocesan newspaper, Archbishop Etienne wrote: “I have been blessed to experience and to be a part of the church in Alaska. You are such a blessing to me.”

“From my early days, I was amazed at the diversity of this population and the depth of your faith,” he said. “With each trip to our different communities, I learned more about the history and geography of Alaska and the way of life that defines so many of our people. … I thank you for welcoming me as one of the successors of the Apostles. I am grateful for the privilege it has been to serve you; to not only witness to the faith, but to witness your faith as well.”

He said that with each move for a new assignment and ministry, “a part of me remains behind with those whom I have served. Likewise, you have now become a part of me, and will go with me into the unknown future. As I assure you of my prayers, I humbly ask for yours.”

He concluded his column with this: “Like St. Paul, I can find no better parting words for you than these, ‘Persevere in the faith.'”

NEXT: Bishops’ actions at spring meeting called a ‘work in progress’