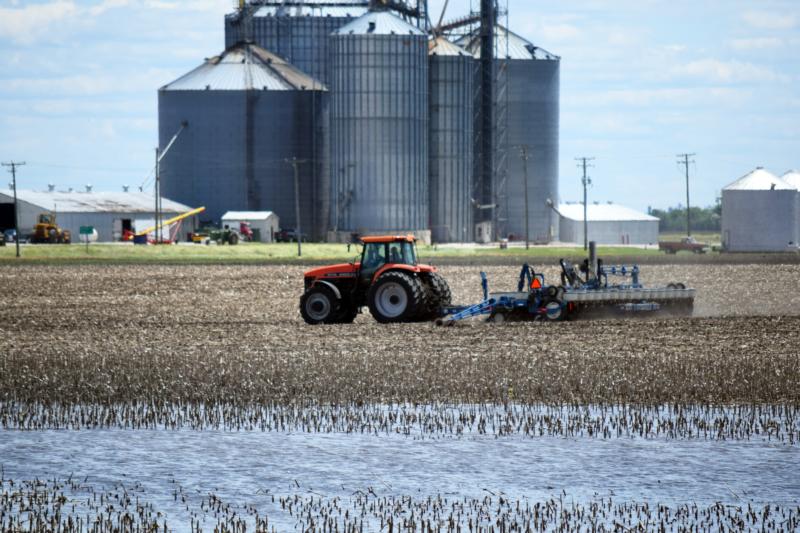 WASHINGTON (CNS) — Farmers rarely have an easy year, let alone an easy life. But 2019 has so far been one for the record books.

Souring trade with China and the mutual imposition of tariffs are just one thorn in the side of farmers. The other thorn is the weather. Extreme weather in the central United States has left farmers up in the air about what to plant and when — assuming they will be able to.

“We can’t get into the fields to plant, especially in the Midwest,” said Rudy Arredondo, president of the National Latino Farmers & Ranchers Trade Association.

“I did a four-state drive to the Great Lakes food summit that (the American Indian) tribes had. All the drive through Ohio, Indiana, Illinois and Michigan, the farmland was really under water,” Arredondo said.

His own kin own seven small farms in northwest Ohio. Visiting in late April, “I was there for a week. When I got there, it was raining. When I left, it was still raining,” Arredondo told Catholic News Service. “They need three weeks of dry weather, and that has not happened. … The concern is, we want to plant.”

Given the size of his association members’ farms, tariffs are not that big a deal. A bigger deal, he said, is that for “some of our producers, we don’t even have any crop insurance.”

He noted, “Farmers are the first responders of any climate event that takes place, because we’ve got to protect our land.” Yet there’s no bonus in it for them, not even in the form of government subsidies promised by President Donald Trump after tariffs closed off China to U.S. farm exports.

Kriss Marion of the Circle M Market Farm in Blanchardville, Wisconsin, used to run a Community Supported Agriculture — CSA in layman’s terms — organic vegetable operation; even specialty crops like ginseng got blocked by tariffs. But after the last of her children went away to college, she and her husband shifted away from crops and toward tending sheep for their wool.

All’s wool that ends wool? Not quite. The spring deluges mean that some of the sheep’s grazing land is still underwater. “We have to get more creative. Not catastrophic. Our corn isn’t gonna be in before crop insurance abates. We’re doing fine, but we live in a community that is ag(riculture)-based, so everybody hurts when farmers hurt,” Marion said.

Her kids going away to college tuned out to be blessing in disguise. Marion and her husband started a bed-and-breakfast, renting their children’s bedrooms. During breaks from school, they bought a 1968 Holiday travel camper for them so as not to disrupt the B-and-B business.

As luck would have It, the campers were even more popular. The Marions got two more of them for their B-and-B. “We got lucky. Right place, right time,” Marion told Catholic News Service. She’s been featured in the Modern Farmer and Pioneer Woman magazines and the Christian Science Monitor. “It’s kind of a hoot,” she said.

But the dairy farmers who are the backbone of Wisconsin’s rural life are in trouble. “We’re losing a dairy farm a day here over the past two years,” Marion said. “They’re moving off the land and getting bought up by investment groups — increasingly by foreign investors and rented back to commodity farmers.”

And, despite her good fortune in avoiding the worst, and the projects that keep rural life going in south-central Wisconsin — Soil Sisters, a 250-member group of women who develop and teach homesteading techniques — it is far from idyllic. The area also is home to “suicides, addiction epidemics,” Marion told CNS. “It’s very hard.”

Despite his own success at farming 700 acres organically in western Iowa with the help of his two sons, “we’re struggling,” said Ron Rosmann, a former board member of Catholic Rural Life. “The towns are struggling. Even the county-seat town of Harlan went (down in population) from 5,300 to 5,000. We’re struggling to keep our parish open.”

“The weather is just terrible,” Rosmann added. “I’ve been farming 46 years and it’s the latest we’ve ever been (planting). We’re still not done planting, but we’re in far better shape than 40 miles away from us along the Missouri (River),” he added. “Even though we won’t have all our soybeans planted, most won’t get them planted at all. It’s been estimated that 15 percent of all corn acres will not get planted to a crop this year.”

Even though his all-organic farm has been successful for decades, backers of conventional farms seem to want to avoid change by just doing more of the same, according to Rosmann. Their rallying cry, he complained was, “Adapt to a hotter planet without mitigating why it was abused in the first place. Nobody will talk to us about it in national media.”

Rossman said the Catholic Climate Covenant was sponsoring a forum in late June at Jesuit-run Creighton University in Omaha, Nebraska, “to talk about this stuff,” and he was planning to go.

“We will have a caucus of those people during the conference to ask some of those questions of how does this work differently in rural communities as opposed to urban communities,” Misleh told CNS. “(Catholic Rural Life executive director) Jim Ennis and I had tried to put something together on agriculture’s positive contribution to climate change. We’ve had some discussions. That would be worth having a conversation about.”

Misleh added, “There is some talk in the rural communities and in some quarters about ‘climate services’ — how can agriculture contribute to reducing greenhouse gases and not contributing as much to the human behaviors on the planet” through such techniques as carbon sequestration, using more sustainable fuels such as biomass and using crops to produce different kinds of fuels.

NEXT: Bishops affirm diocese’s effort for Michigan man’s sainthood cause