From Somalia to US: Initial challenges are met by other hurdles, rewards 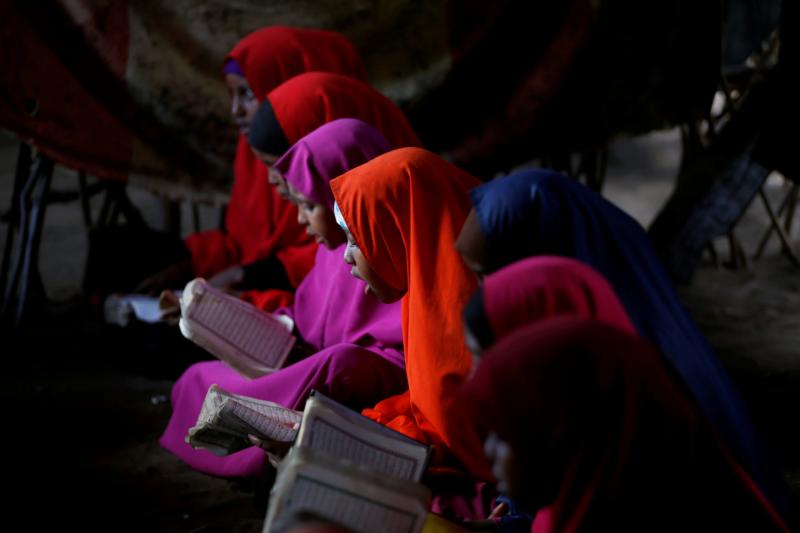 Somali refugees study the Quran Dec. 19, 2017, at a school in Kenya’s Dadaab refugee camp. The apostolic administrator of the Diocese of Mogadishu called on the world to “pay attention to the plight of Somali people” as they face critical food shortages because of a crippling drought. (CNS photo/Baz Ratner, Reuters)

WASHINGTON (CNS) — World Refugee Day, marked annually on June 20, aims to raise awareness of the situations and experiences that refugees endure throughout the world. This year’s theme, #StepWithRefugees — Take A Step on World Refugee Day, encourages solidarity and activism among local, state, national and global communities.

In Skype interviews June 19 and 20 with Catholic News Service, a former Somali asylee and refugee who came to the United States from Somalia, shared the challenges they have faced and rewards and hurdles that continue.

Fartun Weli is a former Somali asylee who has lived in the United States for over a decade. She currently resides in Minnesota and started a local grassroots organization in 2010 called the Isuroon Infertility and Health Issues Project to examine the effects of infertility on mental health and stress levels in Somali women.

Isuroon is a Somali word signifying “woman taking care of herself.” The project developed into a nonprofit helping Somali women and girls to develop self-sufficiency and to maintain healthy lives: physically, emotionally, mentally and spiritually. The organization developed in the Twin Cities’ Somali community, and suitably, the nonprofit’s motto is “We are who we serve.”

Weli said when she came to the U.S. she was fearful of the unknown and unaware of her surroundings but overall she said: “I was lucky. I didn’t have that much trauma because I was like a nomad traveler and didn’t have kids, but I was alone and young.”

She established goals and wanted to contribute to society and her family back home. “The drive to do better was taking over. I was focused on getting opportunities, so I just had that moving in my head over and over . . . getting a job, sending money home, you know, stability.” Weli said that the experiences of refugees are different, but the reality is the same.

Yussuf Mohamed, a former Somali refugee who is currently a case manager for Diakon Youth Services in York, Pennsylvania, spent several years in a refugee camp in Kenya before arriving in the U.S. Due to the political climate in Kenya, he said, it is unlikely that his family will return. “It is sad to think that I might not ever go back. It’s just too dangerous,” he added.

Despite having opportunities to go to school and work in the U.S., Mohamed said that hardships and challenges still exist because rights for refugees and immigrants remain unfulfilled. He said refugees want to contribute to their communities by working and providing for their families, but they often feel unwelcome and judged by others.

“It’s scary to come to a place that’s far away from home, unfamiliar to where you don’t know the language, the people, the rules,” he said. “You want a community to feel supported, but it doesn’t happen often because of common misconceptions and assumptions of the world block truth and reality.”

That identity and knowing who you are is important to him. “I love sharing my culture with others because it is a reminder of who I am and what I value in my life,” Mohamed said.

Weli similarly said: “Identity is important to me. Culture is important. Individuality of freedom to choose and not choose is important. Confidence in making my own decisions is important, and I value community and service. That is what a refugee or an immigrant already has…those values of family, culture, faith.”

Both Weli and Mohamed expressed gratitude and praise for the people and organizations throughout the world that advocate for the rights of refugees, asylees, migrants and immigrants. Weli concluded, “I pray that they will all get their reward from God.”

According to the United Nations Refugee Agency, more than 70 million people are displaced worldwide. More than two thirds of refugees come from Syria, Afghanistan, South Sudan, Myanmar and Somalia. The prominent refugee-hosting countries are the Islamic Republic of Iran, Lebanon, Pakistan, Uganda and Turkey. Coincidentally, Canada resettled the largest number of refugees out of 25 countries in 2018 and accepted 28,000 refugees. The United States accepted 22,900 refugees in the same year.

However, the number of refugees entering the U.S. has drastically changed. Former presidents have set the cap within a range of 70,000 but since the start of his term, President Trump has overseen a major cut in the number of refugees accepted for resettlement. His administration originally reduced the cap on refugees in 2018 to 45,000, yet roughly 22,000 were actually resettled.

Staff members from U.S. Conference of Catholic BIshop’s Migration and Refugee Services and Catholic Charities USA participated in a Capitol Hill briefing June 20 for members of Congress and their staff about the root causes forcing refugees to flee their home countries and the impact of refugee resettlement in the United States.

“We have seen the images of the refugee crisis and World Refugee Day calls attention to the critical need to assist our refugee brothers and sisters and make them feel a sense of welcome,” said Bishop Joe S. Vasquez of Austin, Texas, chairman of the USCCB’s Committee on Migration. “It is imperative for us to highlight the contributions refugees make in our communities.”

NEXT: Jesuits at Indianapolis school, archbishop at odds over gay employee