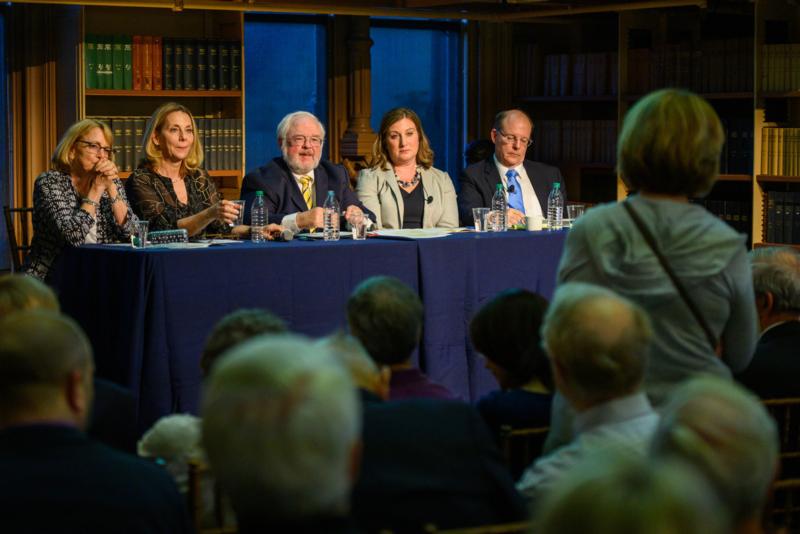 WASHINGTON (CNS) — An air of resignation and frustration overtook Georgetown University’s Initiative on Catholic Social Thought and Public Life panel as it discussed the ongoing clergy sexual abuse crisis. It was, moderator John Carr observed, the seventh time the initiative had focused exclusively on it.

“Lay leadership,” Carr said, needs to be “building on what we do rather than what our leaders say.”
Looming over the event, “Lay Leadership for a Wounded Church and Divided Nation,” were the six-year prison sentence for Australian Cardinal George Pell for being convicted of sexually assaulting two choirboys, and the recent report on financial and sexual improprieties by retired Bishop Michael J. Bransfield of Wheeling-Charleston, West Virginia.

The June 14 event followed the spring meeting of the U.S. Conference of Catholic Bishops, which was almost entirely devoted to actions to address the abuse crisis by responding to the misconduct of some bishops and the failure of some bishops to properly address abuse.

The bishops passed all the abuse measures before them, but none of them said these actions would hit the reset button for the church. In closing remarks, Cardinal DiNardo acknowledged that the steps they had taken were a “work in progress.”

“This has been horrible,” said Georgetown panelist Joan Rosenhauer, executive director of Jesuit Refugee Services. “The leaders of our church are now known as the opposite of what we should be. As a group, they have lost credibility. And they don’t have the ability to speak out in public life and persuade people.”

Melinda Henneberger, a columnist for the Kansas City Star who has written extensively on Catholic issues, repeated her story, which she first published last year, of deciding to leave the Catholic Church as a result of a crisis that seemingly has no end.

“My faith hasn’t changed,” she observed. “But being in the church is being in a relationship. So I felt that I love my church as much as I ever did, but I can’t be married to you anymore.”

“I just felt that to stay would be complicit,” she continued. “After all is said and done, we still haven’t realized the depth of the damage that’s been done.”

“The bishops, as a body, have lost a sense of moral credibility,” said Kathleen Domingo, senior director of the Office of Life, Justice and Peace of the Archdiocese of Los Angeles. “The credibility of individual Catholics — I don’t think that credibility has been lost. I think we have a sort of street cred.”

Domingo mentioned the bill, passed by the California State Senate that would compel priests to disclose information about child sexual abuse that they learn when they are hearing the confession of another priest or a co-worker, thereby invalidating the seal of the confessional. Existing state law exempts knowledge gained in a “penitential communication.” The bill will get a vote in the lower house, the California State Assembly, in September.

Outside the church, she said, “we don’t have a lot of friends. We need to be each other’s friends.”

“There’s no magic wand about getting out of these things,” said Peter Wehner, a senior fellow at the Ethics and Public Policy Center, who is an opinion writer for The New York Times and the only evangelical on the panel. “Sometimes you can’t do it — you have to get through it.”

“Don’t succumb to cynicism,” he advised. “That’s the worst attitude of all.”

“We can’t align ourselves so closely with a party or a candidate that we abandon half of what we believe,” she added.

“I think a little kindness goes further right now than it ever has in my life,” Henneberger said. “Showing your actions though kindness … means a lot and goes a long way.”

But part of that outlook also means “we need to fight this moment and elect a different president,” Henneberger concluded. Speaking of the pro-life agenda, which has been touted as a priority of the Trump administration, she said, “When you see everything else going down the tubes, I hope you don’t let everything else on the planet go down the tubes because of this one issue.”

Wehner found himself driven out of the Republican Party because of “the people who lead it and the corruption going on from people who should know better.”

President Donald Trump, he said, “I consider to be anathema to everything I stand for. He is, psychologically and emotionally, a dangerous man to be president. He’s engaged not in an assault on truth, but an attempt to annihilate truth.”

NEXT: Lifetime film called an ‘extraordinary story of power of bravery, faith’