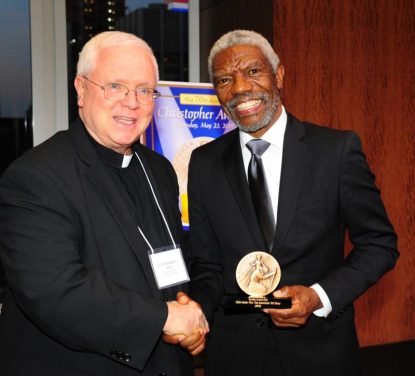 Father Edward M. Dougherty of The Christophers board of directors poses with actor-director Vondie Curtis-Hall after he received The Christopher Award May 23, 2019, for affirming “the highest values of the human spirit.” Curtis-Hall was one of five winners in the TV and cable category for his film, “Faith Under Fire: The Antoinette Tuff Story.” (CNS photo/Paul Schneck, courtesy The Christophers)

WASHINGTON (CNS) — The story of an angry, ill boy, a school, an AK-47, and 500 rounds of ammunition, poised to end in tragedy, is rewritten by an empathetic bookkeeper, Antoinette Tuff, whose unswerving faith changes the boy’s heart and saves countless lives.

Based on this true story, “Faith Under Fire: The Antoinette Tuff Story,” a Lifetime film by Emmy-winning actor and director Vondie Curtis-Hall, was honored with a Christopher Award May 23 for affirming “the highest values of the human spirit.”

The Christophers, meaning “Christ-bearer,” is a nonprofit organization based in the values of service and humanity that seeks to “encourage people of all ages, and from all walks of life, to use their God-given talents to make a positive difference in the world,” according to its mission statement.

Curtis-Hall was one of five winners in the TV and cable category for his film, which dramatizes the true story of what almost became a tragic school shooting at the Ronald E. McNair Discovery Learning Academy in Atlanta.

Curtis-Hall was first approached with the script by Toni Braxton, who played Tuff, and her producer.

“I read the story and I was blown away because so often these stories don’t manifest with this type of ending,” Curtis-Hall told Catholic News Service in a telephone interview. “So I just thought it was an extraordinary story of the power of bravery and faith and surrender, and the power of stepping outside of your own mental cognitive space.”

Curtis-Hall said that he recognized the challenge of portraying this near tragedy on film. But he decided to approach the story through the inner life and pain of the would-be shooter, Michael Brandon Hill, and through the faith and compassion with which Tuff encountered his emotional distress.

He said that he tried to find balance between what audiences see on the surface and what is going on inside Hill.

“The most challenging thing was trying to find that dynamic within his character and having the ability to show Toni’s character (Tuff) seeing beyond the gun and seeing past the shouting and the screaming and realize ‘I don’t think he really wants to kill anyone.” Curtis-Hall said. “But the dance of the movie, where you have two people in a room for two hours, is that he still may kill her and everyone else at any moment.”

Ultimately, though, after spending time working with the story, the script, and Tuff herself, Curtis-Hall said that he attributes Tuff’s ability to calm Hill to her faith.

Tuff came to the set and talked about what was going on in her mind and heart during those hours with Hill.

“There was a part of her that was deeply afraid, and another part that said, ‘OK God, this is in your hands,'” Curtis Hall said. “And from that I get a sense of the calmest calmness, the surrender that allowed her to just talk to the kid as a human being to share her own story and own pain, and show him that he’s not the only one in pain.

Tuff shared with Hill that she had wanted to take her own life, but that, no matter how dire the situation feels, “there is hope, there is God, there is a better way, there is a reason, and a purpose for our lives,” Curtis-Hall said.

The Emmy-winning director admitted that most Hollywood movies shy away from direct discussion of religion, but that this film was “really a pleasure to make.”

Curtis-Hall is not himself Christian. He was brought up Catholic and considered becoming a priest, ultimately deciding not to. He went on to explore Islam and an ashram and now attends Agave, an interdenominational church that welcomes Hindus, Jews, Muslims, Christians, Buddhists and anyone else interested in exploring spirituality.

Though he was unfamiliar with The Christophers when its leaders first contacted him, after researching the organization, he said he was thrilled to be honored by it.

“I think that their mission statement is so important in these times. We are living in such turmoil. The human condition is such that we create chaos around us somehow, and we are always seeking some higher angels in ourselves, wherever that can be found or sought,” Curtis-Hall said. “To honor what is beautiful.”

NEXT: Educational program lifts up immigrant women and their families