Group protests outside Baltimore hotel, objects to proposals on abuse 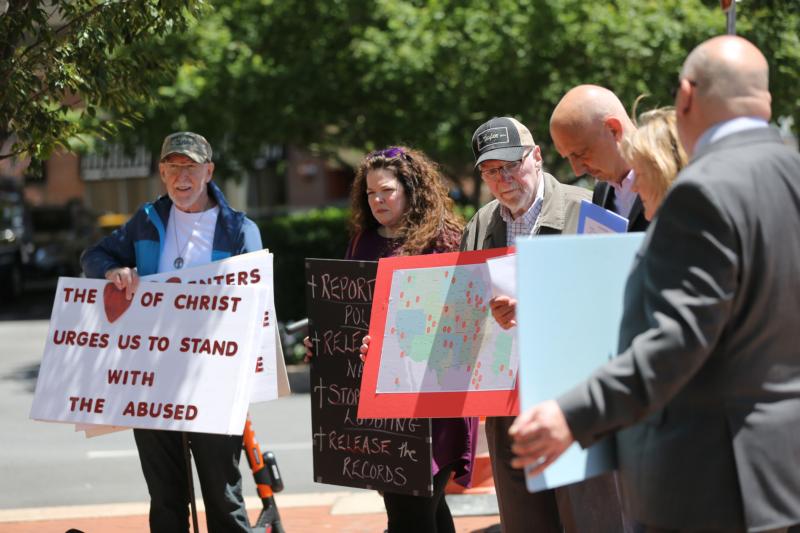 Survivors Network of those Abused by Priests and other groups gather outside a Baltimore hotel June 11, 2019, on the first day of the spring general assembly of the U.S. Conference of Catholic Bishops. (CNS photo/Bob Roller)

BALTIMORE (CNS) — As has been the case for years now, a small group of protesters dismissive of the U.S. bishops’ efforts to enact reforms in their handling of sexual abuse cases gather outside the Baltimore hotel where they conduct their general meeting.

This spring is no different, save for the far more pleasant weather of mid-June than the typically chilly weather that greets them in November.

A group of no more than 10 protesters stood in largely silent protest June 11, demanding more from the bishops — specifically, by having them report abuse claims first to law enforcement.

That was one of four points suggested by Becky Ianni of Burke, Virginia, a director of the Washington-area for the Survivors Network of Those Abused by Priests, who says she was sexually abused by a priest.

“We don’t think the church can police themselves,” Ianni told Catholic News Service. If reporting is done strictly in-house in a process controlled by the church, she added, “how do we learn if they’ve ever gone to the police?”

The second point in Ianni’s plan is for all U.S. dioceses to report the names of accused clergy. Currently, she claimed, about 50 dioceses have not done so. Further, dioceses should include the names of not only accused, but also of “nuns, church employees, brothers, deacons,” along with clergy, plus the number of those who had been abused by each, the period of time abusive acts were believed to have been committed by each person, and whether the police were ever notified.

Third for Ianni is for dioceses to stop lobbying against the elimination of statute of limitations laws. She cited recent reports saying church entities had spent $10 million in the U.S. Northeast to keep the current statutes of limitations in effect, adding that Pennsylvania and South Dakota enacted laws to preserve them.

“It won’t bring healing” to victims, and others who have not stepped forward will stay in the shadows if the laws stay intact,” Ianni said. “If you’re not for it (changing the law), at least don’t oppose it.”

Much of the objection of church leaders against bills aimed at raising the statute of limitations is they often target the Catholic Church.

Earlier this year, the New York Legislature finally got the backing of Catholic officials in that state for extending the statute of limitations when it included provisions that would cover public entities.

According to Ianni, dioceses also should turn over all of their “files and their secret archives” on abuse to the local attorney general “because you have a conflict when you have an internal investigation,” Ianni said.

Peter Isely of Milwaukee, a spokesman for Ending Clergy Abuse, a network of national abuse-prevention groups, said he was outside the Vatican protesting during the Vatican’s February summit with presidents of bishops’ conferences on the abuse crisis.

Isely, too, had low regard for the reform efforts mounted by the bishops in Baltimore. “The ‘metropolitan’ model is the same old model,” he said.

One plan the bishops were considering approving would have the archbishop — also known as a metropolitan — of an ecclesiastical province take the lead in investigating abuse claims lodged against other bishops in his province.

“If 20 attorney generals say it’s OK to report abuse to metropolitans, then OK, report abuse to them,” said Isely, who was critical of the metropolitan proposal. who said he was himself a clergy sex abuse victim, criticized that proposal, claiming “two-thirds of all metropolitans are in dioceses where they’re being investigated over abuse claims.”

Isely, who said he was himself a victim of clergy sex abuse, told Catholic News Service he found the Vatican summit lacking as well as Pope Francis’ May “motu proprio” “Vos Estis Lux Mundi” (“You are the light of the world”). “With Pope Francis, it’s one step forward, two steps back,” he said.

The “motu proprio,” he added, was “just another example” of internal investigations by church entities he considers suspect.

The pope’s new juridical instrument is meant to help bishops and religious leaders around the world clearly understand their duties and church law, underlining how they are ultimately responsible for proper governance and protecting those entrusted to their care. The new document establishes a clearer set of universal procedures for reporting suspected abuse, carrying out initial investigations and protecting victims and whistleblowers.