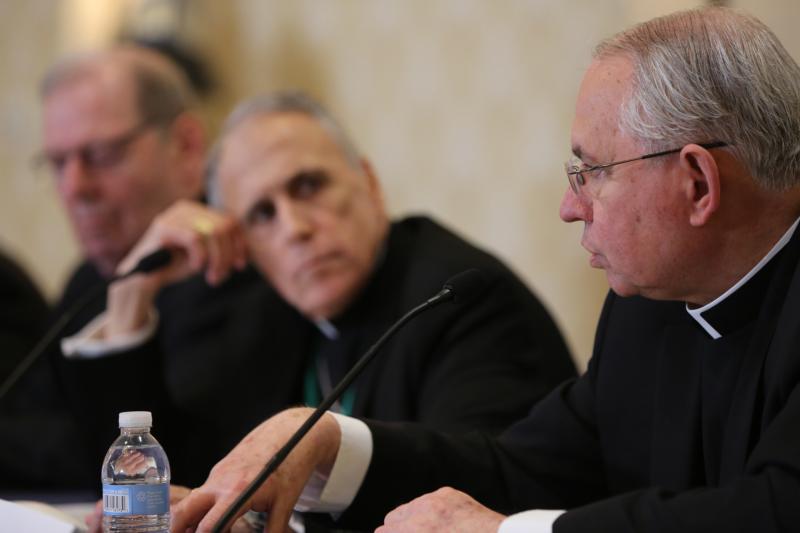 Archbishop Jose H. Gomez of Los Angeles, vice president of the U.S. Conference of Catholic Bishops, speaks during a news conference on the first day of the spring general assembly of the USCCB in Baltimore June 11, 2019. Also pictured are Bishop Robert P. Deeley of Portland, Maine, and Cardinal Daniel N. DiNardo of Galveston-Houston, president of the USCCB. (CNS photo/Bob Roller)

Archbishop Jose H. Gomez of Los Angeles, vice president of the U.S. Conference of Catholic Bishops, speaks during a news conference on the first day of the spring general assembly of the USCCB in Baltimore June 11, 2019. Also pictured are Bishop Robert P. Deeley of Portland, Maine, and Cardinal Daniel N. DiNardo of Galveston-Houston, president of the USCCB. (CNS photo/Bob Roller)

UPDATED – BALTIMORE (CNS) — At the start of the June 11-13 spring assembly of the U.S. bishops in Baltimore, it was clear the bishops had a task at hand: to respond to the sexual abuse crisis in the church.

Several speakers addressing the group discussed the challenge ahead and the need for the bishops to be both transparent and reliant upon lay leadership. The bishops also examined their plans to vote on procedures and policies in response to the abuse crisis, including some they had put aside during their fall general assembly in November at the Vatican’s request.

The delay was addressed from the meeting’s onset June 11 in a message from Archbishop Christophe Pierre, the Vatican’s nuncio to the United States.

He noted that there were “some expressions of ‘dissent'” by some U.S. bishops at the previous assembly about postponing votes on items related to the reemergent clergy sexual abuse crisis, but he also stressed that “unity prevails over conflict.”

He said that despite the desire among U.S. bishops in November to act quickly to address new crises on clergy sex abuse, the postponement of the votes on the issue allowed the U.S. church to participate more fully at the Vatican’s February summit on the protection of minors.

“One of the reasons the Holy Father asked for a delay was that the whole church needed to walk together, to work in a synodal way,” Archbishop Pierre said, “with the guidance of the Holy Spirit to make the path forward clearer.”

Moving forward was certainly a theme of the day, echoed by National Review Board chairman Francesco Cesareo, who called for a greater role for laity in investigating allegations of abuse or reaction to reports of abuse against bishops.

Cesareo also said National Review Board members recommend a thorough review of the “Charter for the Protection of Children and Young People” and a revision in the audit process regarding diocesan implementation of the charter, which governs the church’s response to clergy abuse allegations.

“A strengthened audit would provide a means for improving your dioceses’ existing methods to protect and heal,” Cesareo said. “Virtually all your dioceses, including those where problems came to light under the microscope of the media and attorney generals, have easily passed the audit for years since the bar currently is so low. Now is the time to raise the bar on compliance to ensure the mistakes of the past are not repeated.”

Cesareo also recommended that the charter “should be revised immediately to explicitly include bishops and demand for greater accountability.”

“You have a great opportunity,” he said, “to lead by example and help show dioceses and episcopal conferences around the world not only how important it is for lay involvement to ensure greater accountability and transparency, but also how laity and the episcopacy can be co-responsible for the church’s well-being.”

Both the National Review Board and the National Advisory Council pressed the bishops to encourage Vatican officials to release documents regarding the investigation of misconduct by Theodore E. McCarrick, the former cardinal who was laicized earlier this year. The allegations against him were made public nearly a year ago on June 20, 2018.

The bishops were reminded June 11 of the agenda items related to the church crisis on which they will vote June 13.

The big item for discussion and vote is a plan to implement the document “Vos Estis Lux Mundi” (“You are the light of the world”) issued by Pope Francis in May to help the Catholic Church safeguard its members from abuse and hold its leaders accountable.

The “motu proprio” was one of the measures that came out of the Vatican’s February Vatican summit on clergy sexual abuse attended by the presidents of the world’s bishops’ conferences.

While many of the directives of the document regarding clergy already have been implemented in the United States with its 2002 “Charter for the Protection of Children and Young People,” the action items before the bishops concern allegations of abuse or negligence on the part of bishops. Bishops were not explicitly included in the charter because authority over the bishops and their discipline rests with the pope himself.

The bishops also will vote on a document titled “Acknowledging Our Episcopal Commitments” in which the bishops promise to hold themselves accountable to the commitments of the charter, including a zero-tolerance policy for abuse, and that any codes of conduct in their respective dioceses regarding clergy apply to themselves as well.

Another related item is the “protocol regarding available nonpenal restrictions on bishops,” which outlines what canonical options are available to bishops when a now-retired bishop resigned or is removed “due to sexual misconduct with adults or grave negligence of office, or where subsequent to his resignation he was found to have so acted or failed to act.”

The bishops also discussed the upcoming election, the crisis at the border and the issue of young adults leaving the church.

They were urged to do more to support the suffering of immigrant families, to be with them spiritually as pastors and to voice support for legal measures to help them.

“It’s so important that our works match our words on this issue,” said Bishop Jaime Soto of Sacramento, California, June 11 after a presentation by the working group on immigration issues for the USCCB.

Two bishop members of the group, Archbishop Jose H. Gomez of Los Angeles and Bishop Joe S. Vasquez of Austin, Texas, gave an update of what the U.S. church is doing at the national level and in certain regions of the country on immigration issues.

Bishop Vasquez urged the group to “redouble efforts to offer spiritual support and access to legal and social services to affected families,” saying it is “vital that they feel supported by the church during this time of uncertainty.”

Auxiliary Bishop Robert E. Barron of Los Angeles, chairman of the bishops’ Committee on Evangelization and Catechesis, spoke about an upcoming presentation at the fall meeting on how to respond to the growing number of young people leaving the church.

He said getting the religiously unaffiliated, or “nones,” particularly young people, back to the Catholic Church, should be a top priority for the church, noting that 50% of Catholics 30 years old and younger have left the church.

“Half the kids that we baptized and confirmed in the last 30 years are now ex-Catholics or unaffiliated,” he said, and “one out of six millennials in the U.S. is now a former Catholic.”

In anticipation of the 2020 presidential election, the U.S. bishops’ quadrennial document that provides guidance to voters on Catholic social teaching won’t change, but it will be supplemented by a brief letter and four 90-second videos that reflect the teaching of Pope Francis, the bishops were told.

The bishops also are voting on other issues not related to the abuse crisis at the spring assembly. They are to decide whether to approve a revised national directory on formation and ministry for permanent deacons, if they should update texts for the ordination of clergy, and revise a passage to the U.S. Catechism for Adults about the death penalty.

A small group of no more than 10 protesters stood in largely silent protest June 11 outside the hotel where the meeting was taking place. One of the group’s demands was that the bishops report abuse claims first to law enforcement.

“We don’t think the church can police themselves,” said Becky Ianni, director of Survivors Network of Those Abused by Priests for the Washington area.

At the bishops’ Mass at the end of the first day of the spring assembly, Cardinal Daniel N. DiNardo of Galveston-Houston and president of the USCCB, spoke about the challenges faced by early Christians and urged the bishops to follow the example of Barnabas in the Acts of the Apostles who was respected and trusted.

“Today we honor Barnabas in our desire to do God’s will and to do it carefully and with discretion but also with what the Holy Father calls boldness — apostolic boldness,” he said.

The cardinal said that the work ahead for the bishops would be difficult but they had to remember that the Holy Spirit anoints them to be witnesses to Jesus Christ like Barnabas, who believed in Jesus and shared his gifts with the poor.

“That became almost a recipe, and for it, he was trusted,” he said.

NEXT: Church must use social media to bring ‘nones’ back, bishop says