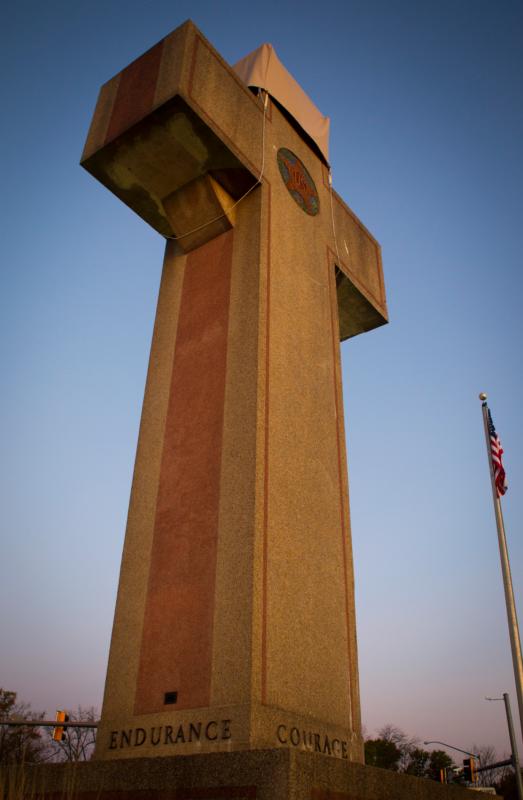 A cross-shaped World War I memorial, a landmark in Bladensburg, Md., is pictured in this 2017 photo. In a 7-2 vote, the U.S. Supreme Court ruled June 20 in favor of preserving a historic cross-shaped memorial, saying the cross did not endorse religion. (CNS photo/Chaz Muth)

WASHINGTON (CNS) — In a 7-2 vote, the U.S. Supreme Court ruled in favor of preserving a historic cross-shaped memorial in Bladensburg, Maryland saying the cross did not endorse religion.

“Although the cross has long been a preeminent Christian symbol, its use in the Bladensburg memorial has a special significance,” said the court’s ruling in an opinion written by Justice Samuel Alito. He said the memorial, paying tribute to soldiers who died in World War I, should be seen in the same “historical context” as the white crosses marking the overseas graves of soldiers who had lost their lives in that war.

He also said removing the memorial “would be seen by many not as a neutral act but as the manifestation of a hostility toward religion that has no place in our Establishment Clause traditions.”

Alito noted that for nearly a century, the 40-foot cross “has expressed the community’s grief at the loss of the young men who perished, its thanks for their sacrifice, and its dedication to the ideals for which they fought. It has become a prominent community landmark.”

“Of course, it remains to be seen what happens in later litigation, but religious symbols may well be OK in public education and elsewhere,” he told Catholic News Service, saying this ruling could have “an impact on the many cases in schools where religious symbols such as the cross, a creche and student-painted religious murals have been banned.”

But the court ruling also left some wiggle room. Abner Greene, a professor at Fordham Law School in New York, said the court “did not adopt the more conservative position that only government coercion violates the Establishment Clause.”

He said the court specifically focused “on the history of the specific religious symbol on state property” and “did not adopt a more categorically permissive rule.”

In late February, the justices heard oral arguments about the 93-year-old cross on a grassy median strip in an intersection of a Washington suburb. Opponents said it endorsed religion and supporters viewed it as a secular monument.

Last year, the 4th U.S. Circuit Court of Appeals based in Richmond, Virginia, ruled 2-1 that the monument is unconstitutional and must be removed or destroyed because it has the “primary effect of endorsing religion and excessively entangles the government in religion.”

The American Humanist Association, a Washington-based group that represents atheists and others, filed suit against the memorial, saying its cross shape on public property violates the Establishment Clause of the First Amendment.

The monument’s supporters stress that its message is secular: to commemorate war victims. They also have argued that its cross shape was not intended for religious reasons but to look similar to cross-shaped grave markers in Europe used for American soldiers who died there.

“Figure out where you want to draw the line,” Justice Elena Kagan said during oral arguments about markers with religious connotations.

She also pointed out some distinctions about this memorial, saying it was put up when crosses were a common way to honor those who died in World War I; it is located near other war memorials and does not include religious language.

Other justices pointed out the strong Christian symbolism that comes across even in a plain cross. Ginsburg pointed out that it is “the preeminent symbol of Christianity.”

Alito had cautioned against a general ruling against all war memorials with crosses, telling the attorney representing those opposed to the memorial: “There are cross monuments all over the country, many of them quite old. Do you want them all taken down?”

The Trump administration had joined dozens of religious, municipal and veterans’ groups defending the cross monument and complaining that the court’s mixed messages about religious symbols have forced legal battles on a case-by-case basis.

The Thomas More Law Center, a nonprofit law firm with a focus on religious liberty, said in a friend-of-the-court brief that the monument’s purpose was not to advance or inhibit religion but to “honor the dead using a historical symbol of death and sacrifice.”

“The decision to destroy this memorial, which existed without complaint for nearly a century, simply because the plaintiffs, passing motorists, claim to be offended by the memorial’s use of the Latin cross, evidences an intolerance to religion, and Christianity in particular, that is wholly inconsistent with our nation’s history and with the purpose and meaning of the First Amendment’s Religion Clauses,” it said.