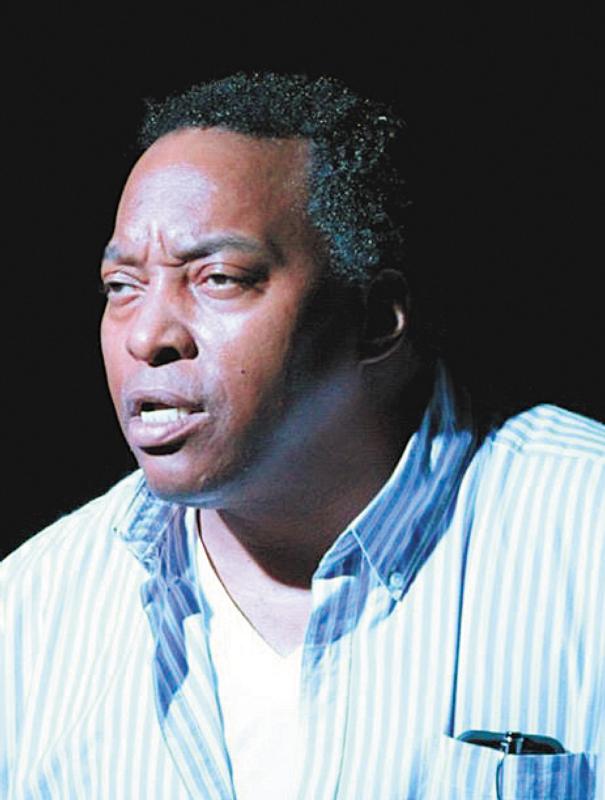 Catholic actor George Elliot is pictured in a theater performance. Elliot, a member of St. Therese Parish in Portland, Ore., wants to educate people about the horrific and sometimes deadly reality of sex trafficking by bringing a drama to the big screen. His new screenplay is titled “Lost in the Shadows.” (CNS photo/Actor’s Actor Studio & Workshop)

PORTLAND, Ore. (CNS) — George Elliot knows the power of a story to touch souls. He has spent years as an actor, director and playwright. Now he’s on a mission to save lives.

Elliot, a member of St. Therese Parish in Portland, wants to educate people about the horrific and sometimes deadly reality of sex trafficking by bringing a drama to the big screen.

He has written a screenplay called “Lost in the Shadows,” which follows the story of a Portland sex trafficking survivor. The production crew hopes to begin shooting the independent film this fall.

“Sex trafficking is Portland’s ugly little secret that people don’t want to acknowledge,” Elliot told the Catholic Sentinel, newspaper of the Archdiocese of Portland. “If we can bring it to light and reach out and save even one person with this film then it’s worth doing. As a Catholic man, I feel I have to walk the talk. I have to use my God-given talent to raise awareness in whatever way I can.”

In the Portland area, about 600 minors and nearly 1,200 adults are being trafficked for sex, according to estimates from the Multnomah County Sheriff’s Office.

Amanda Swanson, trafficking intervention coordinator for the Oregon Department of Justice, said sex trafficking thrives in the state because of the access provided by the Interstate 5 corridor and portions of state law that allow for a flourishing legal sex industry — where illegal trafficking can occur.

“The many strip clubs here operate without a lot of scrutiny,” said Elliot, who immersed himself in the topic while crafting a script for a stage version of “Lost in the Shadows.” He learned that traffickers will use the clubs as a place to break down a young woman’s inhibitions. “Pimps start with sending girls home with guys from the club, and from there put them out into the streets,” Elliot said.

“Lost in the Shadows” is the fictional story of two young victims lured from Portland-area middle- and upper-middle-class homes.

Elliot spoke with individuals who have been through the experience.

“It really humbled me how strong and resilient survivors are,” he said. Elliot wanted his protagonist to reveal such strength, to be “the epitome of a survivor.”

Elliot composed the initial script for a production with young people at his acting studio and workshop in Northeast Portland. As he was finishing the script, most of his acting students were female, ranging from 11 to 20 years old.

“I would look at them and know in my heart that any one of them could be this girl that goes through these things,” said Elliot, who has two grown daughters. “That is what got me passionate about this — working with all these young women.”

The script became fodder for family conversations and turned some of the student actors into activists. A few wrote papers on the topic for school.

But Elliot was not satisfied. Running for portions of February and March 2015, the play drew at most 100 people a night. “I felt like it was not enough,” he said. So he set to work on the film version.

“There have been many documentaries about trafficking and prostitution that young people are not interested in,” he said. “I don’t want to beat them over the head with it like documentaries can do. But if they can see themselves in a medium like a feature film and think, ‘Oh my gosh, she came from a nice family, this was a nice girl that it happened to,’ I think it will make an impact.”

He also hopes “Lost in the Shadows” will educate parents. “I’m a father, and I understand how it must crush a person’s soul to know that their kid got involved in something like this.”

David Renshaw, director of the Office of Communications for the Portland Archdiocese, is inspired by Elliot’s work.

“There isn’t anything glamourous about what he does, but it’s the work that the Holy Spirit has put on his heart,” Renshaw said. “(He’s) working with the forgotten and marginalized and those who need a voice the most.”

“The play has touched so many young people — and adults — and educated them about a topic that isn’t easy to talk about,” he added. “But the film could reach so many more.”

Anne Leonard, who has collaborated on acting projects with Elliot for a decade and is working on the film, said there has been sufficient interest and financial backing for the film to move toward production. The crew is working to tighten the script and determine filming shots and locations.

Elliot has spent a large portion of his own savings to make sure the movie becomes a reality. “I’ve gone into debt to see it through,” he said.

“But this was my calling, this is the path that God put me on,” he added. “It’s something that my faith directs me to do. So I must do it.”

special projects reporter at the Catholic Sentinel, newspaper of the Archdiocese of Portland.

PREVIOUS: Bishop Blaire dies; recalled for living by a simple code — ‘to serve’