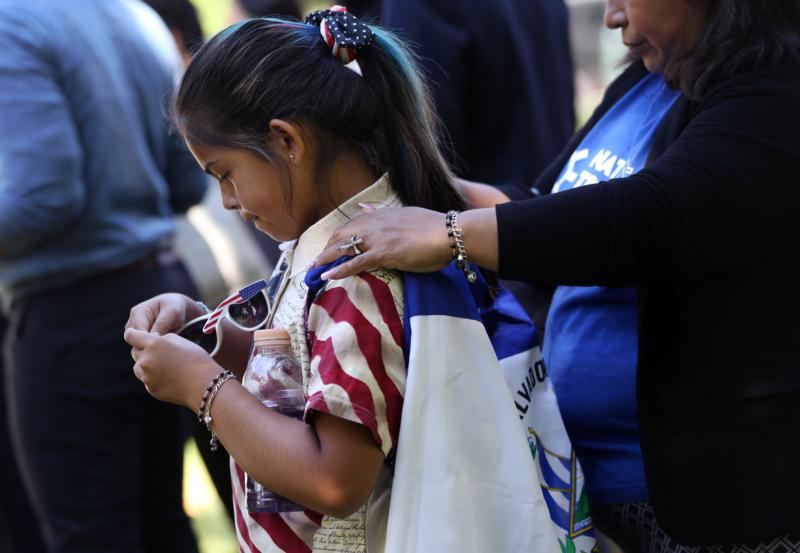 As members of different advocacy groups organize for a rally outside of the U.S. Capitol in Washington June 4, 2019, Marilyn Miranda, 9, has a Salvadoran flag affixed to her back by her mother, Soledad Miranda, who has Temporary Protected Status. Bishop Joe S. Vasquez of Austin, Texas, chairman of the U.S. bishops’ Committee on Migration, applauded the House of Representatives for passing the American Dream and Promise Act of 2019 June 4, which would provide a pathway to citizenship for qualifying “Dreamers” as well as TPS and Deferred Enforced Departure holders. (CNS photo/Leah Millis, Reuters)

WASHINGTON (CNS) — The chairman of the U.S. bishops’ migration committee June 4 praised the U.S. House for passing a measure that gives permanent legal protection to “Dreamers” and those covered by the Temporary Protected Status and Deferred Enforced Departure programs in the United States.

“Dreamers” are young people who qualify to remain in the country under the Deferred Action for Childhood Arrivals, or DACA. They were brought into the United States as children and are seeking citizenship.

With 237 to 187 vote, the House OK’d the Dream and Promise Act of 2019, or H.R. 6. It would provide a pathway to citizenship for qualifying Dreamers, TPS holders and those covered by DED.

“This is a big step for Dreamers and TPS holders who have called the United States home but have been working and living in uncertainty for years,” Bishop Joe S. Vasquez of Austin, Texas, said in a statement.

The bill would provide10 years of conditional U.S. permanent residence for Dreamers who came into the U.S. when they were younger than 18. They also have to have lived continuously in this country for four years, have a diploma from a U.S. high school or a GED. They also would have to pass a background check and must not have committed any serious crimes.

They would receive permanent green cards if, after high school, they complete at least two years of higher education or military service or work for three years.

H.R. also provides a pathway to permanent residency for TPS holders and the DED beneficiaries, who are Liberians.

“Dreamers belong here! They are part of our families, societies, academic and work force,” Archbishop Gustavo Garcia-Siller of San Antonio said on Twitter. “What’s the problem?, Why so much hatred? Why racism and discrimination domains the conversation? Shouldn’t we look with different eyes to the situation. Let’s stop living in darkness.”

A UPI story on the bill’s passage said that Republican members of the House “criticized Democrats for not offering a proposal on how it would pay the estimated $30 billion cost of the legislation and for not including funding for border security.”