An ‘early adopter’ talks about holding bishops accountable on abuse 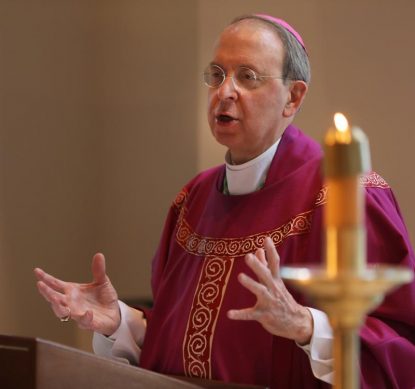 Baltimore Archbishop William E. Lori celebrates a Mass with special intentions for survivors of abuse and for abuse prevention April 8, 2019, in the chapel the headquarters of the U.S. Conference of Catholic Bishops in Washington. Archbishop Lori has implemented a comprehensive series of reforms regarding bishop accountability in his archdiocese. (CNS photo/Bob Roller)

WASHINGTON (CNS) — When it comes to holding himself and other bishops accountable, Baltimore Archbishop William E. Lori is the earliest of early adopters.

Before Pope Francis issued his “motu proprio” instructing the world’s dioceses on handling allegations against bishops, before the U.S. bishops themselves voted on such procedures, Archbishop Lori had implemented a comprehensive series of reforms regarding bishop accountability in his archdiocese.

And ahead of a likely vote on a process by which the nation’s archbishops would be charged with investigating allegations made against any bishops in their province, Archbishop Lori has already done it.

When the U.S. bishops meet June 11-14 to discuss a series of proposals outlining a process for holding themselves accountable, Archbishop Lori will have a unique perspective: He’s already put into practice much of what they will be voting on.

It started after last November’s meeting, when the U.S. bishops discussed, but at the request of the Vatican did not vote on, a series of proposals that would legislate how to hold themselves accountable.

Having held listening sessions around his archdiocese in the wake of revelations of abuse by then-Cardinal Theodore E. McCarrick as well as the release of a Pennsylvania grand jury report, Archbishop Lori was aware that people wanted a transparent way to report wrongdoing not just about priests and church workers, but about bishops.

“I asked myself, ‘What can we do? Can’t we do something right now to respond to what I heard in those many evenings I spent with laity around the archdiocese?'” Archbishop Lori recalled in a June 3 interview with Catholic News Service. “And the answer was yes.”

The Baltimore Archdiocese took an independent reporting tool called “EthicsPoint” that it was already using, and promoted it as a way to collect any allegations of inappropriate behavior by Baltimore bishops. To address concerns that a report might be “submerged” by an archdiocesan office, Archbishop Lori said, complaints are reviewed by “two retired judges who were on the independent review board.”

Once they had assessed any complaint for “a minimal threshold for credibility,” they would then report it to law enforcement and the nuncio.

Archbishop Lori said the process has been “pretty well received,” judging from feedback he has gotten from his visits around the archdiocese. The Archdiocese of Boston and the Diocese of Wheeling-Charleston, West Virginia, have subsequently implemented similar reporting programs.

Archbishop Lori also has become an early example of what is being called “the metropolitan option.” In the wake of the McCarrick scandal, the bishops and the Vatican have been grappling with how to address allegations about abuse or the cover-up of abuse when made against bishops.

At the November bishops’ meeting, the “metropolitan option” was first discussed, and Pope Francis later adopted this model in his “motu proprio.”

When allegations were made against Bishop Michael J. Bransfield of Wheeling-Charleston regarding both concerning sexual harassment of adults and financial improprieties, the Vatican removed him and appointed Archbishop Lori as apostolic administrator, normally a caretaker role.

“However, in my case, I was also charged to oversee an investigation,” Archbishop Lori said. “That’s different. That’s new. And that’s what gets us into the territory of what the bishops will be considering next week.”

The archbishop said that he felt such an investigation was not something he should undertake by himself or with diocesan or archdiocesan staff. Instead, he selected a team of qualified lay experts to conduct the investigation. This team included a state’s attorney, an expert in personnel matters, an expert in finances, and an expert in canon law.

Archbishop Lori said he also opened a hot line so that people who might have other allegations could report them.

While in the “motu proprio” from Pope Francis, such investigations are to be completed and sent to the Vatican within 90 days, Archbishop Lori admitted that his investigation took five months. The report of his investigation is confidential and has been sent to the Vatican, but the archbishop said he has communicated periodic updates to the people in the Wheeling-Charleston Diocese. He also has restricted Bishop Bransfield’s ministry within the Baltimore Archdiocese as well as in the Wheeling-Charleston Diocese.

What makes this case somewhat unusual is that Archbishop Lori also was functioning as apostolic administrator. In that capacity, he has expanded the diocese’s review board and finance council and has both of them meeting more regularly.

One criticism of the metropolitan option is that “bishops will be investigating bishops.” Although Archbishop Lori put together a lay team of experts, he also admitted that “there is no perfect system.”

“When you look beyond the church, you see that compliance is always a moving target,” he said. “It is going to be no different for us. We are flesh-and-blood human beings, so there is no perfect system.”

“However,” he added, “bishops investigating bishops is a concern. It is a concern for us because we want this to be helpful and credible.”

As safeguards in such a system, Archbishop Lori recommended a “robust third-party reporting system,” so that appropriate complaints go directly to law enforcement and the papal nuncio.

He also said it was a requirement to use “qualified laypersons. While the metropolitan oversees the investigation and periodically gets an update on it,” he said, “it is very important to use people who know how to do investigations and have no vested interest other than to do the right thing.”

Should it be the metropolitan himself who must be investigated — McCarrick had been a metropolitan, for example — then the senior suffragan bishop would conduct the investigation and “is bound by the same rules and same level of transparency.”

At the end of the day, however, the final decision about the accused bishops lies with the pope. “That is how we are structured as a church,” he said. “It is not accidental or something we can just discard or replace with another structure.”

When asked about the upcoming bishops’ meeting, Archbishop Lori said his hope was that “the proposals now under consideration will by that time be not only refined procedurally but also will reflect the age-old wisdom of the church and the wisdom of the people that we are privileged to serve.”