Judge: Missouri’s only abortion clinic can stay open at least until June 21 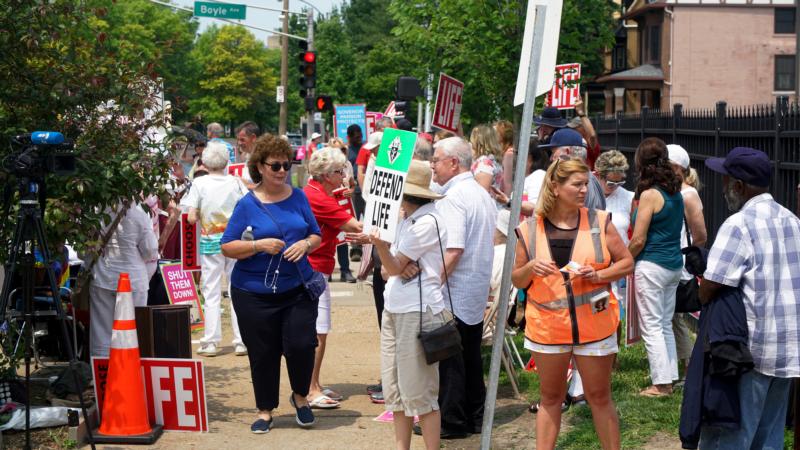 Pro-life supporters gather outside Missouri’s sole remaining Planned Parenthood clinic in St. Louis May 31, 2019. The Missouri Department of Health and Senior Services has told Planned Parenthood officials it will not renew the clinic’s license when it expires unless changes are made to comply with various state health regulations. Just hours before the license expired May 31, a judge issued a temporary restraining order keeping the clinic open until June 4. (CNS photo/Lawrence Bryant, Reuters)

WASHINGTON (CNS) — A circuit court judge in St. Louis ordered the Missouri Department of Health and Senior Services June 10 to allow the Planned Parenthood clinic in St. Louis, Missouri’s only abortion clinic, to stay open at least until June 21, when he said the agency must decide if it will renew the facility’s license.

If it closes, Missouri would be the first state without an operating abortion facility since the U.S. Supreme Court issued its ruling on Roe v. Wade in 1973. Women who want an abortion would have to go to the neighboring state of Illinois.

Circuit Judge Michael Stelzer set a new hearing for the morning of June 21.

His most recent ruling followed his earlier temporary restraining order he handed down to allow the clinic to remain open until June 4. That action came after the state health department said the facility would have to close May 31 because it failed to make changes the department said were necessary to have its license renewed.

The state agency had informed Planned Parenthood May 20 that it might not renew the clinic’s yearly license due to its failure to comply with regulations. Just hours before the license was to expire May 31, Planned Parenthood had requested a temporary restraining order from Stelzer.

After a May 29 hearing on the matter, he issued the order, allowing the clinic to stay open until June 4, when he set another hearing. He then granted Planned Parenthood’s motion for clarification, ruling to deny the state’s request the court issue subpoenas for five physicians who have worked at the clinic. His June 10 ruling followed.

Planned Parenthood’s noncompliance with state health regulations date back to 2017, according to a DHSS report, and include a failure to properly clean surfaces and tools, lack of smoke detectors, failure to perform criminal background checks on some employees, and failure to follow approved physician selection and appointment protocols.

PREVIOUS: Southern Baptist Convention wrestling with sex abuse crisis of its own