Southern Baptist Convention wrestling with sex abuse crisis of its own 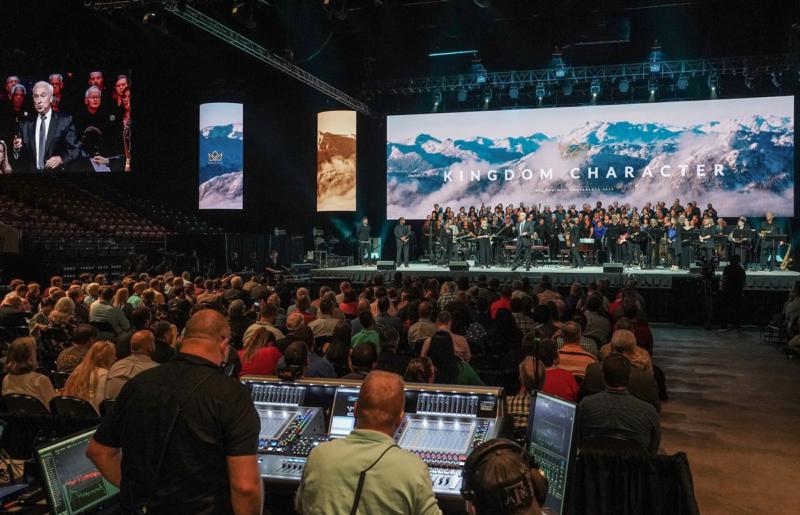 Southern Baptist pastors gather June 9, 2019, in Birmingham, Ala., during a conference ahead of the denomination’s June 11-12 annual meeting, which drew more than 8,000 delegates. The Southern Baptist Convention has been rocked by recent media reports that revealed pastors, church employees and volunteers sexually abused more than 700 people, mostly children, over the last two decades. (CNS photo/Matt Miller, courtesy Baptist Press)

As the U.S. Catholic bishops met in Baltimore to discuss new mechanisms to hold themselves accountable on sex abuse, the Southern Baptist Convention was wrestling with the same vexing issue at its annual meeting June 11-12 in Birmingham, Alabama.

Rocked by media reports that revealed Southern Baptist pastors, church employees and volunteers sexually abused more than 700 people, most of them children, over the past two decades, the nation’s largest Protestant denomination took new steps to expel member churches that cover up or mishandle sexual abuse allegations.

Greear told reporters that the Southern Baptist Convention wants to ensure that its member churches are safe environments for children and vulnerable people, and that the convention will consider “all solutions” that could include advocating for legislation to amend statute of limitations on sex abuse crimes.

“We are going to be people who are marked by awareness, transparency, a willingness to own mistakes that are made and a desire to treat each other charitably,” said Rev. Greear, who last year formed an advisory group to draft recommendations on how to confront the sex abuse issue.

Russell Moore, the president of the Ethics & Religious Liberty Commission, the moral and public policy entity of the Southern Baptist Convention, said during a news conference that having member churches report sexual abuse complaints “right away” to civil authorities is “a major part” of the convention’s new Caring Well education curriculum to prevent sex abuse and care for survivors.

“That’s a key piece of this moving forward,” Moore said, adding that he and other Southern Baptist leaders also have been keeping a close eye on the recent developments regarding accountability measures for Catholic bishops in the United States and around the world.

“I do not find that attitude among evangelicals right now and I think that’s a welcome development to see,” Moore said. “There is no section of religious life, of secular life, that’s invulnerable to predation. … We ought to be hoping the Catholic Church will act in a just way on these things.”

During their June 11-13 spring assembly in Baltimore, the U.S. Catholic bishops voted to implement an independent third-party system that will allow people to make confidential reports of abuse complaints against bishops. The system, which would include a toll-free number and an online component, is supposed to be in place no later than May 31, 2020.

Among other actions, the bishops approved a plan to implement Pope Francis’ norms issued May 9 to help the church safeguard its members from abuse and hold its leaders accountable. They also approved a document including a promise to hold themselves accountable to the commitments of their “Charter for the Protection of Children and Young People,” including a zero-tolerance policy for abuse.

Meanwhile, the delegates who attended the Southern Baptist Church’s annual meeting approved an amendment to the convention’s constitution to allow their churches to be disaffiliated if they cover up or mishandle sexual abuse.

In February, an investigation by the Houston Chronicle and the San Antonio Express-News uncovered the scope of the Baptist sex abuse crisis. The newspapers published a database of more than 200 Southern Baptist pastors, church leaders, employees and volunteers who pleaded guilty or were convicted of sex crimes.

The series, “Abuse of Faith,” sparked a national outcry and prompted more than 350 readers to contact the newspapers to offer tips or share their own stories of abuse. The scandal has undermined some trust and confidence in church leaders. A recent report from the Southern Baptists’ research organization indicates that about one in three church members believe there are more revelations of clergy sex abuse to come.

Against that backdrop, the Southern Baptist delegates, representing around 47,000 member churches, who attended the annual meeting in Alabama voted to establish a special committee to evaluate allegations of wrongdoing and to recommend action against member churches.

“So now we have a clock ticking, and nothing is happening in terms of consequences for churches mishandling abuse in the next year,” said Cheryl Summers, a resident of St. Louis, who helped lead a protest rally outside the Southern Baptist annual meeting.

Summers, who said she left her Southern Baptist church four years ago amid concerns over how the convention handled issues of domestic and sexual abuse, told Catholic News Service that she was disappointed that church leaders did not take “dramatic, decisive action.”

“We will be in a holding pattern for at least another year,” Summers said.

Unlike their Catholic parish counterparts, local Southern Baptist churches are independent and ordain their own clergy. Compared to the Catholic Church, the Southern Baptist Convention is more akin to a loose federation of member churches and has little authority to discipline and instill uniform policies in the way that a Catholic bishop can do in his diocese.

“There is no line of authority from the Southern Baptist Convention’s headquarters in Nashville (Tennessee) down to the local church,” said Summers, who also was part of the “For Such a Time as This” protest rally outside the 2018 Southern Baptist annual meeting in Dallas.

Summers said the protesters were demanding that the convention establish a database to document and track credibly accused and convicted sex abusers, as well as requiring that member clergy, church employees and volunteers undergo training on addressing sexual abuse claims. She said the Caring Well curriculum is “a positive step forward.”

Summers and the other protesters also said they believed that the Southern Baptist Convention’s “low view of women” — the idea that the Bible places men in a position of authority over women — empowers abusers. Southern Baptist leaders countered that they take the dignity and safety of women seriously.

During the annual meeting, abuse survivor Stephanie Davis received a standing ovation onstage after a video presentation in which she recounted being sexually abused by a music minister when she was a teenager.

In the video, David urged her fellow Southern Baptists to stand with victims and hold sex abusers accountable. “We have to get this right,” she said.

NEXT: Judge: Missouri’s only abortion clinic can stay open at least until June 21