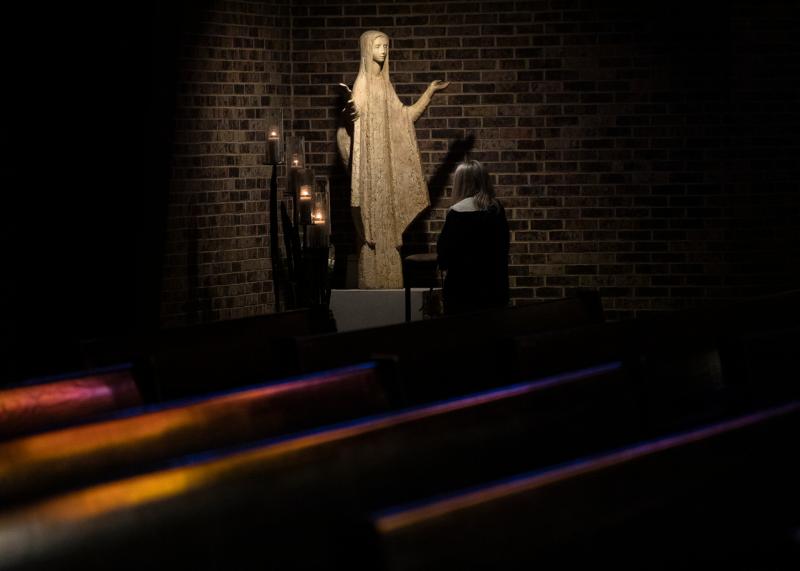 A woman prays at the Church of the Good Shepherd in Camp Hill, Pa., May 7, 2019. Francesco Cesareo, chair of the National Review Board, told Catholic News Service June 3 that the path to rebuilding the U.S. church’s credibility as it emerges from the lingering clergy sexual abuse scandal rests in embracing the role of laypeople as important collaborators. (CNS photo/Tyler Orsburn)

WASHINGTON (CNS) — The path to rebuilding the U.S. church’s credibility as it emerges from the lingering clergy sexual abuse scandal rests in embracing the role of laypeople as important collaborators, said the chairman of the National Review Board.

Francesco Cesareo told Catholic News Service June 3 that laypeople want transparency and openness from the bishops and the sooner the prelates put aside their guardedness about welcoming laity as partners, the sooner the U.S. church will heal.

“I think the problem is that they perceive that it’s this ‘gotcha’ mentality that (the laity) are after. What we’re really trying to do is find what’s wrong,” Cesareo said.

Leaders of the U.S. Conference of Catholic Bishops continued to develop a series of policies in early June as they hone their response to clergy abuse. They will consider and vote on several proposals at their spring general assembly June 11-14 in Baltimore.

The new policies are expected to be refinements of proposals they originally had hoped to adopt at their fall general assembly in November. They put them aside at the request of the Vatican hours before they convened.

Vatican officials sought the delay, citing Pope Francis’ desire first to meet with the heads of bishops’ conferences from around the world in February to discuss the church’s response to the crisis.

The proposals then included the establishment of a third-party confidential reporting system for claims of any abuse by bishops; instruction to the U.S. bishops’ canonical affairs committee to develop proposals for policies addressing restrictions on bishops who were moved or resigned because of allegations of abuse of minors or adults; and initiating the development of a code of conduct for bishops regarding sexual misconduct with a minor or adult or “negligence in the exercise of his office related to such cases.”

Cesareo said he hoped that during the intervening months, the U.S. bishops have developed “concrete action items” that will signal how serious they are in addressing clergy abuse and ensuring accountability and transparency.

“I’m hoping that they will be bold enough to include in a very meaningful way laypeople in whatever they will be deciding,” he said. “My biggest concern is that it’s going to end up being bishops overseeing bishops and if that’s the case it’s going to be very difficult for the laity to feel any sense of confidence that anything has truly changed.”

The proposals being developed recently circulated among members of the all-lay National Review Board and, Cesareo said, each member individually offered comments and observations. While declining to discuss the specifics of the proposals because they were confidential, Cesareo said he offered wide-ranging and “hopefully constructive” responses.

Cesareo has long pushed the bishops to welcome lay involvement in the process of rebuilding church credibility. As review board chairman, he has been frank with the bishops in conversations about the steps he sees as necessary for the church to right itself.

In recent addresses to the bishops, Cesareo has focused on the need to overcome complacency in some dioceses in adhering to the “Charter for the Protection of Children and Young People.” He is on the agenda to address the spring general assembly and is expected to again focus in part on complacency.

Cesareo also cited “recurring concerns that speak to the issue of complacency” in a letter that was included in the recently released 2018 annual report that detailed diocesan compliance with the charter.

Specifically he noted: failure by dioceses to publish abuse reporting procedures in all the languages in which Mass is celebrated; poor recordkeeping of background checks; failure to train or do background checks of clergy, employees or volunteers who work with children; a high percentage of children not being trained, especially those in religious education programs; and lack of a formal monitoring plan for priests who have been removed from ministry.

In his interview with CNS, Cesareo credited “a few bishops” for stepping up and showing “leadership and courage” as they worked to address the fallout from the resurgence of the abuse crisis during the last year.

“They have been more transparent and open to accountability,” he said while not naming who he had in mind. “We have to hope that the entire episcopal body embraces that kind of courage.”

Still, much work remains, he said, pointing to the recent release of extracts from correspondence of Msgr. Anthony J. Figueiredo, secretary to former Cardinal Theodore E. McCarrick, who faced restrictions from Pope Benedict XVI on public ministry that were not formal sanctions and were not strictly enforced.

Cesareo called for the U.S. bishops to release the information diocesan files hold on abusive priests and others once and for all.

“How many times is it going to be this slow removal of the Band-Aid that only makes the wound worse?” he asked. “If they can just confront that and say, ‘We’re going to be open and honest and accountable.’ We can’t wait for another major crisis again.”

Cesareo also cautioned the bishops about defending the limits of their response and implementation of policies because of restrictions imposed by canon law.

“Obviously at the end of the day, it’s the Holy See and pope who can discipline (a bishop), I understand that,” Cesareo told CNS. “But using canon law as the reason something can’t be done, the bishops are letting themselves really use canon law as a wall.”

NEXT: An ‘early adopter’ talks about holding bishops accountable on abuse