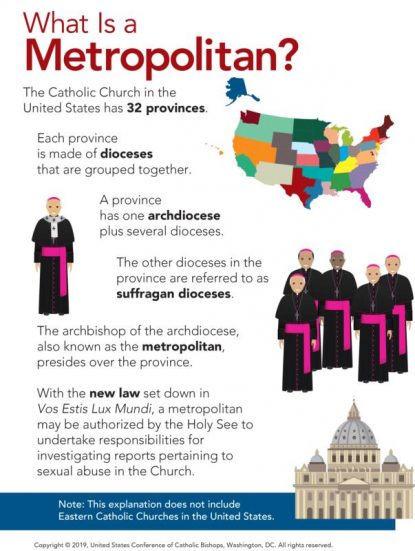 The archbishop of the archdiocese, also known as the metropolitan, presides over the province. (CNS graphic/U.S. Conference of Catholic Bishops)

BALTIMORE (CNS) — Representatives of lay organizations expressed caution over the steps taken by U.S. bishops to boost accountability and transparency in dealing with clergy sexual abuse, saying future actions by the bishops will determine how successful the initiatives ultimately will be.

Full collaboration with laypeople will be the key to the success of the measures adopted by the bishops, they said in a series of statements following the U.S. Conference of Catholic Bishops’ spring general assembly in Baltimore June 11-13.

“Catholics are looking for robust actions and long-term solutions to the twin crises of abuse and leadership failures,” Kim Smolik, CEO of the Leadership Roundtable, said in a June 13 statement.

“While the bishops took important initial steps, more remains to be done to address the root causes and create a new culture of leadership that values accountability, transparency and co-responsibility with clergy and laity,” she said.

The Leadership Roundtable was founded in the wake of the 2002 abuse scandal in the Archdiocese of Boston. It was officially formed in 2005 by lay, religious and ordained leaders to help the church address the abuse crisis and promote best practices and accountability in all areas. It has been working since then to help dioceses address leadership and governance issues.

The bishops approved four measures during their assembly including the operation of an independent third-party reporting system to accept abuse allegations and the implementation of Pope Francis’ norms, “Vos Estis Lux Mundi” (“You are the light of the world”), to safeguard church members from abuse and boost accountability of church leaders.

Smolik said that while she had not seen the final directives, her organization was “pleased that multiple bishops intervened to specify the need for greater lay involvement.”

The roundtable had sent recommendations to the USCCB prior to the assembly calling for national standards to support the measures under consideration and a study into what led to the mishandling of incidents of clergy abuse.

“New procedures are a start,” Smolik’s statement said, “but the pervasive culture that led to the crises is still in place. A new culture of leadership is necessary if we are to truly address the crises.

“It starts by acknowledging the leadership failures, looking at the root causes, providing new information in seminaries and other educational institutions, setting up governance structures with checks, balances, etc.,” she said.

“Lay Catholics are lending their expertise and look forward to continued work with the clergy to create a new culture of co-responsible leadership,” she added.

During a news conference at the close of the bishops’ meeting, Cardinal Joseph W. Tobin of Newark, New Jersey, acknowledged that the “twin-headed scandal” of clergy abuse and mismanagement by bishops “is costing people their faith.”

He said that laypeople inevitably would be involved in the new systems being implemented even if the adopted measures did not specifically call for their participation.

“Proceeding with what we legislated today for us, the possibility of doing that without qualified laypeople I would say is next to impossible. It is impossible and it would be highly irresponsible,” Cardinal Tobin said.

Still, skepticism remained from Catholic-led organizations that have been highly critical of the bishops’ handling of clergy abuse for years.

The Survivors Network of those Abused by Priests said June 13 that none of the measures adopted require all allegations of misconduct to be immediately forwarded to civil law enforcement authorities.

The plan governing the third-party reporting system will find reports funneled through a central receiving hub, which would then be responsible for sending allegations to the appropriate metropolitan, or archbishop, and to the papal nunciature in Washington. The metropolitans will be responsible for reporting any allegation to local law enforcement authorities as the first step toward investigating a claim.

SNAP said in its statement that “church officials have so far refused to mandate lay involvement, instead leaving it up to each metropolitan to decide, and have not yet said if every allegation received will be routed to police.”

“Without these mandates, there is no guarantee that reports will be routed to police and investigations will be transparent and public. Instead, all reports can remain secret and insulated within the church’s internal systems,” SNAP said.

The organization called for each metropolitan to establish “a truly independent” lay review board with members to include least one clergy abuse survivor and two members chosen from investigators recommended by the appropriate state attorney general.

SNAP also wants any investigation of a bishop to be conducted “in a locale far from the area where the complaint originated.” It said full transparency and accountability requires that the investigations and lay review board reports and findings must be publicly released with appropriate redactions to protect victims.

Terrence McKiernan, president and co-director of BishopAccountability.org, said June 13 that it was “encouraging that the bishops are grappling at last with sexual and managerial misconduct in their own ranks.”

In a statement, he called for greater involvement by laypeople in all aspects of the new standards.

McKiernan also appealed for ways to assure greater accountability among bishops as well as independent auditing of the new procedures, which he described as having “obvious structural weaknesses” that will likely guarantee “that the system will not command the confidence it requires to succeed.”