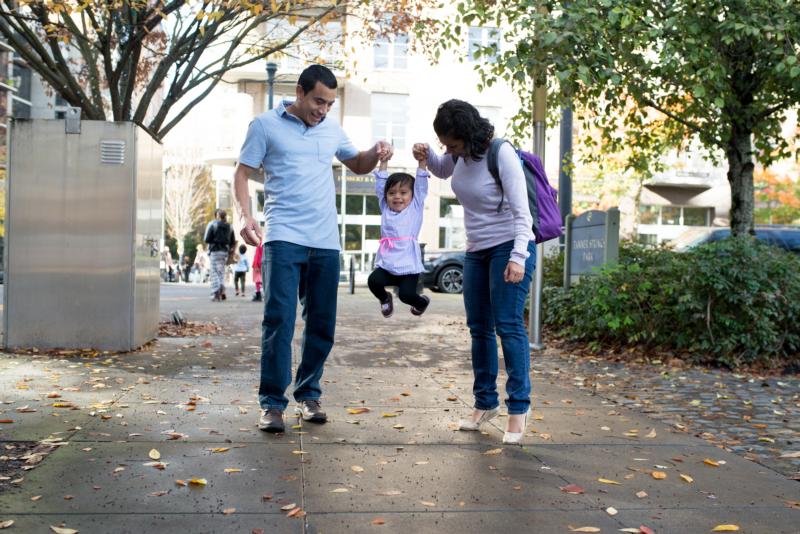 Osmin Zelaya and Wendy Tacuba are seen with their daughter, Aliena, in Portland, Oregon, is this undated photo. The family from St. Andrew Parish in Portland moved to Canada May 6, 2019, to avert deportation after immigration attorneys could not find a clear path to resolve the couple’s immigration status in the United States. (CNS photo/courtesy Zelaya-Tacuba family)

PORTLAND, Ore. (CNS) — A well-known Portland Catholic married couple has moved to Canada because attorneys could not find a clear path to resolve the pair’s immigration status.

Osmin Zelaya and Wendy Tacuba packed their belongings and readied their 4-year-old daughter, Aliena, and drove north in May to a welcome in British Columbia. Friends at St. Andrew Parish held a poignant farewell party.

Zelaya and Tacuba faced a dilemma. Staying in Portland might mean deportation for Zelaya, a Nicaraguan whose temporary protected status has been revoked by a new federal policy.

“It has been difficult to say goodbye to our community in Portland, a place where our friends and family live, a place we call home,” said Zelaya, a natural resources advocate. “We are leaving not because we want to but because we have to if we want to keep our family together.”

The move is an especially big change for Tacuba, 34, who grew up in Portland. In the city since she was 9, Tacuba has U.S. residency under Deferred Action for Childhood Arrivals, or DACA, another program with an uncertain future. Her parents brought her to Oregon from Mexico in 1994. The family’s first task was to find a parish to live near. They found St. Andrew, in a neighborhood that was still affordable for immigrants in the mid-’90s.

“Deep in our hearts, leaving is not our first choice,” Tacuba, a pharmacist, told the Catholic Sentinel, Portland’s archdiocesan newspaper. “But the risk of being separated has caused a lot of anxiety. We have seen other families pulled apart and we don’t want that to happen to us.”

Father Dave Zegar, pastor of St. Andrew, reported that parishioners, including him, are sad about the couple’s departure.

“They are good friends,” the priest said. “Are these the kinds of people we are sending out of the country? They have worked hard to make our city better. It is heartbreaking for a lot of us.”

“For them to get some stability in their lives it was the right thing to do, but for our parish, our community, our country, this is a terrible thing,” said Peter Anderson, a retired Massachusetts judge and member of St. Andrew.

Anderson and Zelaya met in a group meant to build bridges between different cultures at the parish. Then he and Tacuba teamed up to lead a committee.

“They have so much to offer,” Anderson said. “It makes me very sad and very ashamed of my country. It’s Canada’s gain.”

Leaving St. Andrew is one of the most difficult tasks, said Tacuba. Aliena was baptized there. “We have met so many people we are super attached to,” Tacuba explained, her voice faltering with emotion. “We have felt a lot of love and support. It is really sad.”

In addition, her mother, sister, nieces and nephews live in Portland.

One of their first missions in British Columbia? Find a Catholic parish.

Zelaya concluded: “I hope our new community in Canada is a place that welcomes everyone, where we feel safe and respected.”

NEXT: Young women urged to reject ego, focus on life of integrity, honesty