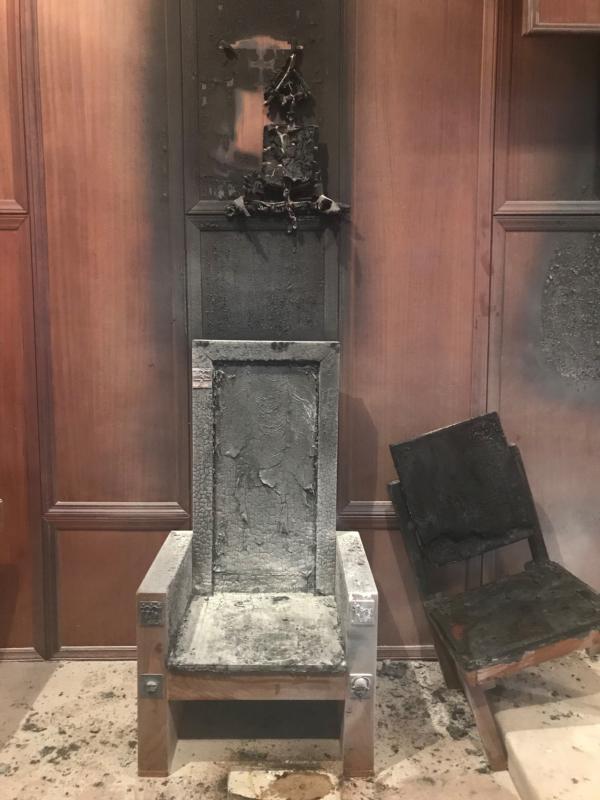 The charred remains of the cathedra, or bishop’s chair, and the presider’s chair in the sanctuary of the Co-Cathedral of St. Thomas More in Tallahassee, Fla., are seen June 11, 2019. (CNS photo/courtesy Diocese of Pensacola-Tallahassee)

TALLAHASSEE, Fla. (CNS) — Masses for the vigil of the feast of Pentecost and for Pentecost were celebrated at the Co-Cathedral of St. Thomas More with the scars left by a June 5 fire in the sanctuary still very visible.

An arrest has been made since the fire filled the church with smoke and burned three chairs — including the cathedra, or bishop’s chair, and charred the walls. When firefighters arrived, resting atop one of the chairs was a burned Bible.

Luckily, the fire was caught in time and didn’t spread to other parts of the cathedral. No injuries were reported.

An investigation led officials to determine the cause was arson. On June 7, Jimmy Patronis, Florida state fire marshal, announced Seth Johnson, 32, was arrested and charged with first-degree felony arson.

Detectives matched fingerprints found at the scene to Johnson. Tallahassee Police took Johnson into custody after the State Fire Marshal’s Bureau of Fire, Arson, and Explosives agents identified him as a prime suspect.

Johnson has a criminal past, consisting of trespassing and petty theft. If convicted on the arson charge, he could face 30 years in prison.

“Our minds and hearts have been shaken by this experience. Sometimes, even a physical structure can take on a persona and when it’s wounded, we all feel the hurt,” Father John B. Cayer, rector, wrote in a message to parishioners posted on the co-cathedral’s website.

“We strive now to move from shock and sadness, to resolve and rebuilding. Our bride, the church, has been wounded and we are bandaging her wounds, but we now need to set a course of rebuilding a new and vibrant sanctuary,” he said and announcing the co-cathedral parish had begun a restoration fund.

Catholic parishioners expecting to attend evening Mass June 5 at the co-cathedral were instead subjected to news of a probable arson attack to their beloved church.

Officers arrived on the scene around 4:30 p.m. and Darha Nixon, the church’s business manager, informed them of the news. Nixon had already fought the fire with a chemical fire extinguisher that scorched much of the wall. According to Nixon, when custodians prepared for the afternoon Mass, they opened the side doors, which is where the suspect likely entered the church.

Bishop William A. Wack of Pensacola-Tallahassee, who endured 2018’s Hurricane Michael, which devastated much of the rural and coastal portions of area, told the diocese the news of the fire in a June 5 statement.

“Thankfully, no one was hurt, and it went out before igniting the whole building. An investigation is underway. Thank you for your prayers,” he said.

On May 23, Bishop Wack released a video message on his “State of Diocese” address marking his 18-month tenure of the diocese during which he has visited all of the parishes and missions of the 18-county diocese within Florida’s Panhandle — save two chapels, which he said he hoped to visit soon.

In the video, he spoke about the challenges of the local church, specifically the impact of Hurricane Michael, which he described as the “four-hour storm” that created an enormous amount of devastation that will take more than just a few months or a year from which to recover.

“We’re rebuilding thanks be to God and insurance, but it will take time, so we need patience,” he said. “I know we will fully recover in the months and years ahead.”

He also spoke about the sexual abuse crisis that has rocked the church on both the national and international level. The bishop noted the Pensacola-Tallahassee Diocese has “worked hard for the last few decades to make safe welcoming places for children and all people.”

“We need to be transparent and show the world what we have been doing and what we are doing, and continue to provide a loving, warm and caring place for all of God’s children,” he said.

Beaulieu writes for the Florida Catholic, newspaper of the Archdiocese of Miami and the dioceses of Orlando, Palm Beach and Venice.