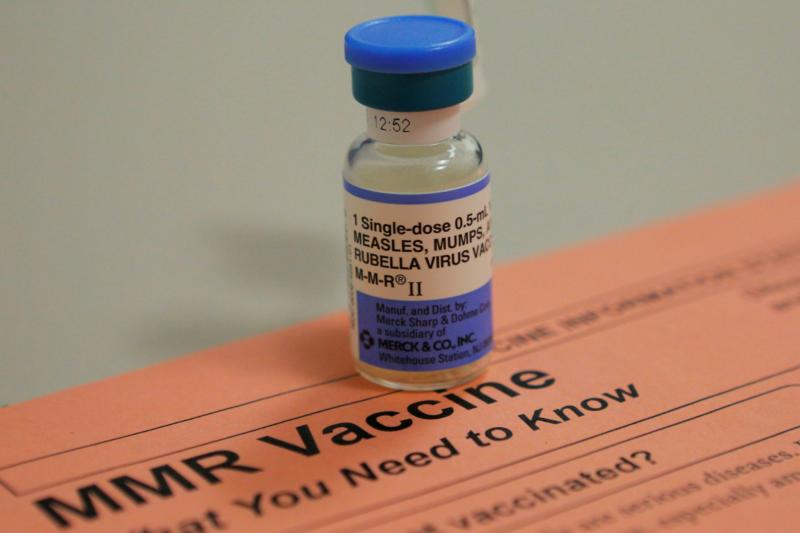 A vial of the vaccine for measles, mumps and rubella and an information sheet is seen at Boston Children’s Hospital Feb. 26, 2015. “We have a responsibility not only to protect our own health and that of our dependents, but also the community” through vaccinations, said Bishop Edward B. Scharfenberger of Albany, N.Y. (CNS photo/Brian Snyder, Reuters)

UPDATED – ALBANY, N.Y. (CNS) — Measles, chicken pox and other diseases are making a comeback as more parents are choosing not to vaccinate their children out of the fear of side effects, especially with regard to the Measles, Mumps and Rubella vaccine. Skeptics are concerned it leads to sickness, autism or death.

But doctors, physicians and immunologists have come forward to debunk the loud din of the anti-vaccination movement and the Catholic Church has joined them.

A long supporter of vaccines, the church continues to advocate for their use.

Still, the anti-vaccination movement has continued to grow, flourishing on social media, through celebrities and uncredited sources, such as online parenting blogs. All the while, religious groups, doctors and people of science are continuing their fight to inform parents who are doubtful of the safety and effectiveness of vaccines.

Anti-vaccination propaganda has been widely circulated online and in ultra-Orthodox Jewish communities in parts of New York where there have been recent measles outbreaks. The growing distrust of vaccines in these tight-knit communities isn’t coming from opposition in any Jewish religious doctrine, but from an inherent vulnerability to misinformation that comes from living such an isolated lifestyle, some say.

“Misinformation can spread more easily and the correct information is hard to reach people,” Peter Zaas, professor of religious studies at Siena College, told The Evangelist, newspaper of the Diocese of Albany.

As of late May, 254 confirmed cases of measles were found in New York’s Rockland County alone, and county officials recently issued a ban, barring any unvaccinated minors from public places in an attempt to combat the outbreak.

Other Orthodox Jewish areas in the state, such as in Brooklyn’s Williamsburg and Borough Park neighborhoods, are experiencing outbreaks. According to New York City Health, 85 cases of the measles were reported in Borough Park, and 424 cases have been reported in Williamsburg.

The Centers for Disease Control and Prevention reported in late May that measles cases in the United States have spiked to 971 so far this year, the highest number in any single year since 1994.

The CDC has debunked concerns about links between vaccines and autism.

In early May, the first confirmed case of the measles was reported in the Albany Diocese. Albany Bishop Edward B. Scharfenberger said: “We have a responsibility not only to protect our own health and that of our dependents, but also the community” through vaccinations.

“The statistical risk from vaccines proven to be effective is minimal compared to the grave danger of spreading disease,” he added.

Since the recent rise in cases of measles, the Catholic Church has restated its support for vaccinations, and has openly discussed the religious ethics of using vaccines, some of which were created using cells taken from aborted fetuses.

The chickenpox, rubella, hepatitis A, one version of the shingles vaccine, and one preparation of rabies vaccine were all made by growing the viruses in fetal embryo fibroblast cells, which were first obtained from two terminated pregnancies in the early 1960s.

These same embryonic cells obtained from the early 1960s have continued to grow in the laboratory and are used to make vaccines today. No further sources of fetal cells are needed to make these vaccines.

“It’s a replication of that original cell line,” said Dr. Cynthia Renauld Lansing, physician and member of the Catholic Medical Association. Physicians are able to “replicate (cells) in the lab” to make the vaccines which does not require additional or newer sources of fetal cells to continue making the vaccines.

According to the Pontifical Academy for Life — a research institution on bioethics and moral theology issues within the church — Catholics are encouraged to utilize vaccines “despite their distant association with abortion.”

The Vatican also has stated in “Dignitas Personae” (“The Dignity of a Person”), a document on bioethics, that “grave reasons may be morally proportionate to justify” the use of vaccines, and that the “danger to the health of children could permit parents to use a vaccine which was developed using cell lines of illicit origin.”

“We are morally free to use vaccines,” said Lansing. She adds that through mass vaccinations, Catholics are able to preserve the “moral health” of their surrounding communities.

The National Catholic Bioethics Center in Philadelphia reiterated Lansing’s comments, stating that Catholics are “morally free to use the vaccine, despite its historical association with abortion.” The center adds that Catholics “have a moral obligation to protect the life and health of their children and those around them.”

The center, along with the Vatican and the Pontifical Academy for Life, encourages pharmaceutical companies to research alternative methods to vaccinations that don’t utilize cells taken from an aborted fetus. But “until such time as new vaccines become available,” Catholics should continue using the available vaccines.

New York State lawmakers passed a bill on Thursday, June 13, that ends religious exemptions to vaccines in the state. The bill, which revises the current public health law allowing only children with medical issues to be exempt, was signed by Gov. Andrew Cuomo into law and goes into effect immediately.

The New York State Catholic Conference did not take a position on the bill, but remains concerned with the consequences of tampering with religious freedom.

“The herd immunity provided by the mandatory vaccination law is an essential component of maintaining the public health, and we support this policy,” said Dennis Poust, director of communications for the New York State Catholic Conference.

“While we did not take a position on the bill and there is no Catholic tenet that could be interpreted to allow a Catholic parent to claim a religious exemption, we would have preferred if the exemption language had been tightened to prevent abuse rather than be completely removed. In general, as a matter of principle, we get concerned when religious liberty protections are removed from the law.”

Measles can lead to complications such as diarrhea, ear infections or pneumonia and brain infections that can cause permanent brain damage. Contracting measles during pregnancy also can increase the risk of early labor, miscarriage and low birth weight infants.

Lansing said that people with weaker immune systems who are unable to receive the vaccines are relying on herd immunity to stay safe: “Anybody whose immunity is compromised, anybody who’s on chemotherapy, they’re relying on people to be vaccinated,” she said.

NEXT: Archbishop joins pope in calling for talks to resolve U.S.-Iran tensions