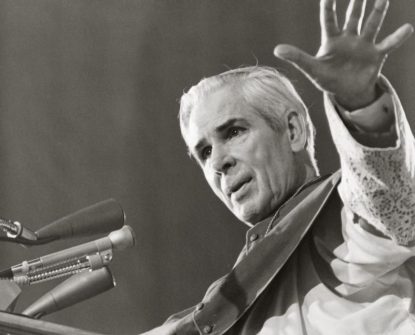 UPDATED – PEORIA, Ill. (CNS) — As a small group of witnesses silently looked on, the mortal remains of Archbishop Fulton J. Sheen were interred at St. Mary’s Cathedral in Peoria late in the afternoon of June 27, completing a transfer from St. Patrick’s Cathedral in New York that began early that morning.

Peoria Bishop Daniel R. Jenky was among those present as the casket arrived by hearse at the cathedral where Archbishop Sheen was ordained a priest nearly a century ago.

The bishop blessed with holy water a container holding the casket as it was carried up the cathedral steps by nine seminarians and again after it was placed in a new tomb at a side altar dedicated to Mary under the title of Our Lady of Perpetual Help.

Earlier in the day, Bishop Jenky announced that the sainthood cause for the famed preacher, media pioneer, author and missionary had resumed after being suspended for five years pending the resolution of a legal dispute over the location of Archbishop Sheen’s remains.

The Peoria Diocese opened Archbishop Sheen’s cause for canonization in 2002. His heroic virtue and life of sanctity were recognized in 2012 by Pope Benedict XVI, who granted him the title “Venerable.”

Since his death Dec. 9, 1979, at age 84, Archbishop Sheen had been interred in a basement crypt under the main altar of St. Patrick’s Cathedral.

Diocese of Peoria officials are hopeful that Pope Francis will soon receive evidence of an alleged miracle attributed to Archbishop Sheen’s intercession. Already approved by medical experts and theological advisers to the Vatican’s Congregation for Saints’ Causes, it involves the healing in 2010 of a newborn infant who was without vital signs for more than 60 minutes.

Authentication of the miracle by Pope Francis could then lead him to call for Archbishop Sheen’s beatification.

Present at both the disinterment of her uncle’s remains in New York and their arrival at the cathedral in Peoria was Joan Sheen Cunningham, Archbishop Sheen’s closest living relative who petitioned the New York court system for the transfer in 2016.

Efforts by the New York Archdiocese and the trustees of St. Patrick’s Cathedral to block the transfer ended when the New York Court of Appeals rejected their final appeal June 7. The archdiocese has since cooperated with the Diocese of Peoria in ensuring the transfer followed both civil law and church law.

Among the church law requirements was that the transfer be done without any solemnity. It was not publicized in advance, and no liturgical ceremony or public gathering took place during the transfer. However, after the diocesan interment Bishop Jenky led the small group of priests, women religious and officials present in a song to Mary.

“Let us conclude as I know Fulton Sheen would want us to,” said Bishop Jenky as he began to sing the “Salve Regina.”

“I thought everything done here was perfect, just perfect,” Cunningham said afterward. “Very reverent. I know my uncle would like it, and I’m sure he’s sleeping very peacefully.”

While Cunningham and her son, Paul — who also was present — both live in New York, she noted Archbishop Sheen “has a tremendous amount of family” in his native Peoria area who are pleased at the return of his remains and the effort the Diocese of Peoria has made to that end.

While the events surrounding the transfer were kept private and discreet, the public was invited to visit the tomb starting June 28.

Patricia Gibson, chancellor of the Diocese of Peoria, was the official witness of the disinterment and transfer of the remains.

After working for 18 years with Bishop Jenky on the archbishop’s cause, “it was a great privilege and honor to be present and witness the transfer of Archbishop Sheen’s remains to his home cathedral in Peoria where he served Mass as a youth and was ordained a priest 100 years ago,” Gibson said in a statement.

Born in El Paso, Illinois, and raised in Peoria, Archbishop Sheen was a brilliant academic who served on the faculty of The Catholic University of America for 24 years. He gained fame and influence with radio and early television series such as the “Catholic Hour” and “Life is Worth Living” that reached millions. He won an Emmy Award for Most Outstanding Television Personality in 1953.

He brought many into the Catholic faith, including celebrities such as Claire Booth Luce and Henry Ford II. From 1950 to 1966 he served as national director of the Society for the Propagation of the Faith and his fame helped raise large amounts of money for support of the foreign missions.

The author of dozens of books — including his autobiography, “Treasure in Clay” — Archbishop Sheen spent his final years preaching retreats and missions.

Dermody is editor-in-chief of The Catholic Post, newspaper of Diocese of Peoria, Illinois.