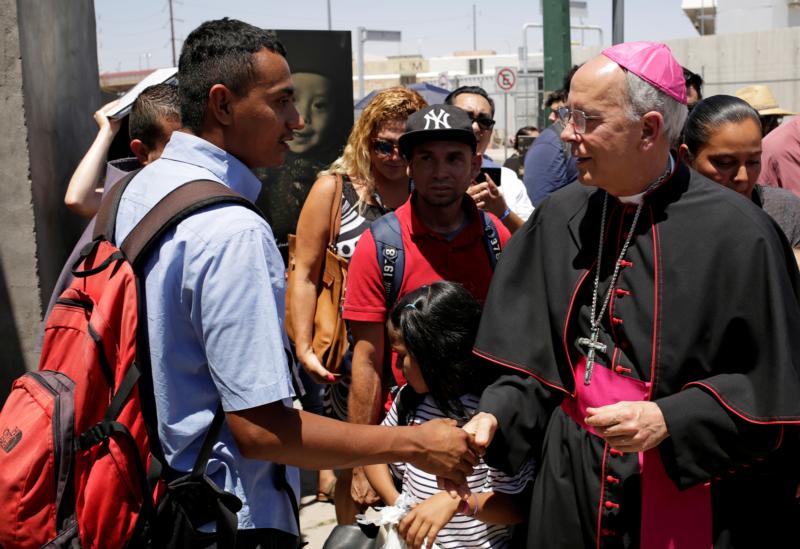 Bishop Mark J. Seitz of El Paso, Texas, greets a Salvadoran migrant June 27, 2019. Bishop Seitz walked and prayed with a group of migrants at the Lerdo International Bridge in El Paso as they sought asylum in the U.S. (CNS photo/Jose Luis Gonzalez, Reuters)

The following is the text of a statement by Bishop Mark J. Seitz of El Paso, Texas, on the immigration situation at the border at El Paso and Ciudad Juarez, Mexico, that he delivered June 27 before he crossed the Lerdo International Bridge that connects the U.S. and Mexico:

As a Catholic and Christian leader on the border, I am often called to be a doctor of the soul. Standing here at the U.S.-Mexico border, how do we begin to diagnose the soul of our country?

In a day when we prefer to think that prejudice and intolerance are problems of the past, we have found a new acceptable group to treat as less than human, to look down upon and to fear. And should they speak another language or are brown or black … well, it is that much more easy to stigmatize them.

For this heart-sick government and society, these people should have stayed home, given into hopelessness and watched helplessly as their children suffer. Would we rather they die on the banks of the Rio Grande than trouble us with their presence?

But we have not suffered the mistreatment meted out to them by those who represent our country. We haven’t really felt their hunger and cold. And it is not our children who will be denied food, water and tenderness tonight. We Americans need our hearts checked. Our hearts have grown too cold and too hard and that bodes ill for the health of our nation.

NEXT: Bishop tries to help migrants at international bridge in El Paso