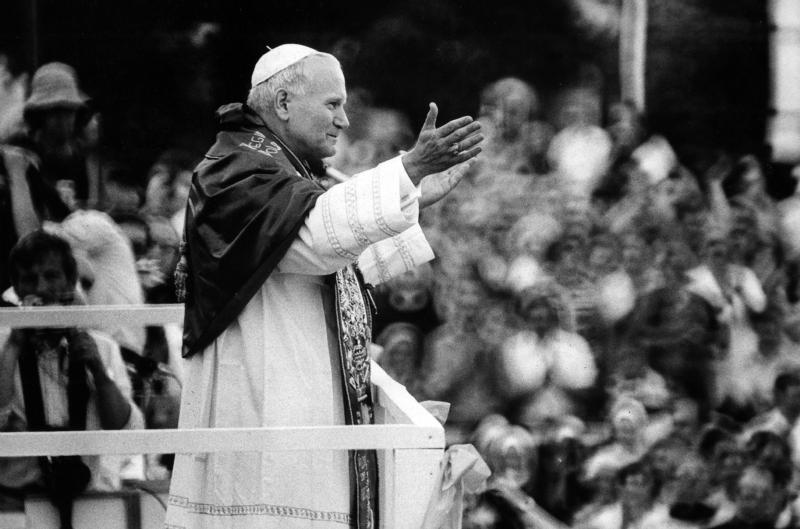 St. John Paul II greets throngs of Poles waiting for a glimpse of their native son at the monastery of Jasna Gora in Czestochowa during his 1979 trip to Poland. White House officials marked the 40th anniversary of St. John Paul II’s first pilgrimage to Poland with a June 21, 2019, screening of “The Divine Plan” about President Ronald Reagan’s and the late pontiff’s anti-communism efforts. (CNS photo/Chris Niedenthal)

UPDATED – WASHINGTON (CNS) — Senior White House officials gathered June 21 with leaders of various faith groups and nonprofit organizations as well as community leaders to commemorate the 40th anniversary of St. John Paul II’s first pilgrimage to Poland with a screening of “The Divine Plan,” a documentary to be released worldwide Nov. 9.

Independent screenings are taking place before the full release of the film by Robert Orlando, an award-winning writer and filmmaker. It is based on a book of the same title that he co-wrote with Paul Kengor, a New York Times best-selling author and political science professor.

The film and book, released June 10, explore the “deep spiritual bond” between the pontiff and President Ronald Reagan. While the two world leaders didn’t share the same religious faith — Reagan was a Protestant — they did “share the same moral convictions that led them to confront atheistic communism,” say the authors.

On June 2, 1979, St. John Paul celebrated a historic Mass in Warsaw and began a nine-day visit to his home country. During the Mass on the eve of Pentecost, the pope prayed God would send down his Spirit to renew Poland, which was then under communist domination.

“This anniversary,” a release from the White House said, “marks the remembrance of the long struggle of the Polish people against communism and the millions of people who now live in freedom because of St. John Paul II and his extraordinary life as a follower of Jesus Christ and a champion for human dignity and religious liberty. Similarly, this administration works relentlessly to preserve Americans’ rights in the present and future.”

(Learn more about “The Divine Plan” here, and watch the documentary’s trailer below.)

The White House Domestic Policy Council and Office of Public Liaison hosted a policy discussion surrounding current parallels between the past and present in communist and socialist countries and the film.

In a statement, Joe Grogan, director of the Domestic Policy Council, said Reagan and St. John Paul had a “remarkable partnership.”

“These two great leaders brought about the historic collapse of the Soviet Union and the miraculously peaceful end to the Cold War,” he said, adding that the Trump administration “will continue to advocate for the protection of religious liberty and free speech.”

As Poland’s native son, St. John Paul had a special interest and a key role in the demise of European communism. For years he criticized the moral bankruptcy of the system, to applause in the West. His visits to his homeland helped light the fire of reform, which eventually led to the first noncommunist government in the Soviet bloc.

Reagan gave one of his best-known speeches June 12, 1987, when he challenged Soviet leader Mikhail Gorbachev to “tear down this wall!” He meant the Berlin Wall, which had divided West and East Berlin since 1961. East German officials ordered it opened in November 1989. Its demolition officially began June 13, 1990, and was completed in 1992.

Besides Grogan and Orlando, those attending the screening included Ambassador Callista Gingrich, U.S. ambassador to the Holy See; Tim Pataki, deputy assistant to the president and director of the Office of Public Liaison; Pawel Kotowski, deputy chief of mission at the Embassy of Poland in Washington; and John Lenczowski, founder and president of The Institute of World Politics.

In remarks after the screening,Gingrich congratulated Orlando on the film, adding: “As a Polish American, a lifelong Catholic, a filmmaker and the U.S. ambassador to the Holy See, I can attest to the extraordinary significance of St. John Paul II’s pilgrimage to Poland in 1979, and its impact on President Ronald Reagan.”

Reagan first met the pope at the Vatican in 1982, she said. When he returned to the U.S., the president “instructed the U.S. State Department to work closely with the Holy See and ordered the opening of a full-fledged embassy,” she added. In 1984, formal Vatican-Gingrich. diplomatic relations were established.

Reagan “not only forged a strong personal relationship” with St. John Paul, Gingrich said, but “also an important diplomatic bond between the United States and the Holy See — one that endures to this day. … The United States views its partnership with the Holy See as critical to promoting peace, freedom and human dignity. Our work touches a wide range of global issues, from promoting religious freedom, to combating human trafficking, to preventing conflict and violence.”

NEXT: 50 years on, moon landing still generates a wistful sense of wonderment