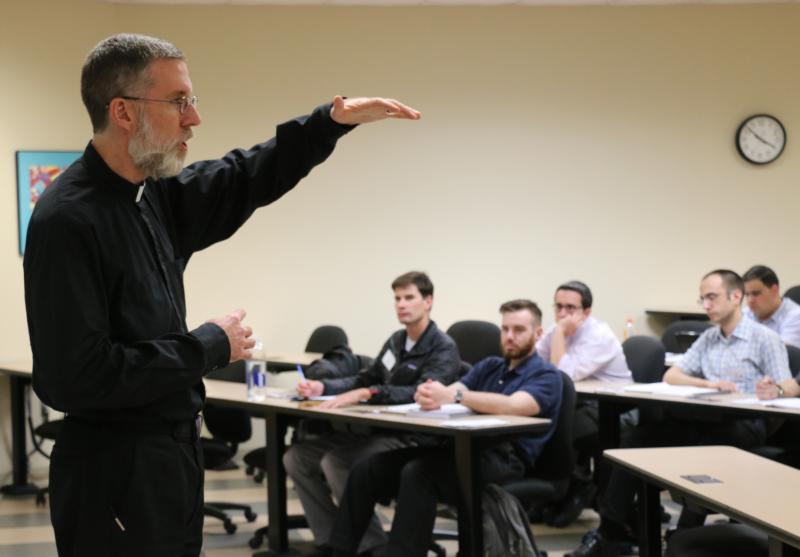 Father James Rafferty, director of mission and communication with the Institute for Priestly Formation, discusses the temptation of Jesus in the desert during a class for seminarians June 11, 2019, at Creighton University in Omaha, Neb. (CNS photo/Mike May, Catholic Voice)

Ordained two years earlier, in 2004, he began to question his vocation. He took a leave of absence, but his soul was filled with darkness. He was depressed, and the priesthood no longer seemed attractive. He dreaded returning to parish ministry.

Then, while at Broom Tree Retreat Center near Yankton, South Dakota, he met Father Jim Mason of the Sioux Falls Diocese.

There, Father Mason, now rector of Kenrick-Glennon Seminary in St. Louis, taught Father Lorig principles of spiritual discernment and prayer that helped him place his doubts and fears before the Lord, and he found peace and a new resolve.

Father Mason learned those principles through the Institute for Priestly Formation.

For the past 25 years, the institute’s spiritual formation programs have helped thousands of priests and seminarians from around the United States to experience God’s love and pass it on to their flocks.

To mark that milestone, the institute, located at Jesuit-run Creighton University in Omaha, will hold a celebration weekend titled “A Reason for Your Hope” July 12-13 in Omaha.

“IPF’s focus is the spiritual lives of diocesan seminarians and priests, to help them encounter the love of God in a deeper way and be transformed in their priestly lives,” said Father Richard Gabuzda, the institute’s executive director and co-founder.

“Our goal is always to help the participants focus on what God is doing in their lives,” he said. “When a priest’s heart is more focused on God, he’s able to be a better instrument of God. The people benefit from that because he has the mind of Christ more present to him.”

And the fruits those priests and future priests receive from the institute and take back to their flocks are great.

“It saved my priesthood,” said Father Lorig, who is now director of pastoral services for the Omaha Archdiocese.

“It helped me listen deeply to the affective movements of my heart … the good, the bad, the ugly, the hopes, the desires, the fears … and to just show all that to Jesus,” he told the Catholic Voice, Omaha’s archdiocesan newspaper.

Having become familiar with the spirituality of St. Ignatius of Loyola and discernment of spirits as taught by the institute, Father Lorig eventually attended his own three-year, three-weeks-a-year spiritual direction formation program there beginning in 2011.

He now serves as a spiritual director for its summer seminarian program.

Father Lorig said the primary expectation of parishioners for their priests is whether he himself knows God. “All the other things are secondary,” he said.

“You need to be able to tell them what it’s like to be in a relationship with God,” he said. “They don’t want a textbook answer, they want to know what it’s like for you in the real experience of being with him,” he said. “Our hearts are created for that.

“If you have that in your priesthood, it influences how you give homilies, how you enter into meetings, how you counsel people through funeral preparation and marriage preparation.”

Beginning in 1994 with six seminarians in attendance, the Institute for Priestly Formation’s reach has grown every year since, said Father James Rafferty, its director of mission and communication.

This summer, 177 seminarians from more than 60 U.S. dioceses are on the Creighton campus for their nine-week formation program. Nearly 60 priests will attend the institute’s spiritual direction training later this year.

Father Rafferty, who also teaches classes for the institute, said the organization is relatively unique in its exclusive focus on the formation and prayer lives of diocesan priests.

Originally a priest of the Diocese of Scranton, Pennsylvania, Father Rafferty began teaching in the summer programs in 2003 and went full time in 2013. He became of priest of the Omaha Archdiocese in 2017.

“It’s a great privilege to accompany my brother priests in this way and to witness the goodness in their hearts,” he said. “And it’s marvelous to see the generosity of God and how he desires to communicate that.”

Father Scott Schilmoeller, who was ordained in 2017, attended the seminarian program in 2012, and what he learned then is important to his ministry today, he said, such as understanding how to distinguish between the Lord’s voice and temptations or distractions.

“There’s a voice of the enemy — the evil one — who would have loved nothing more than to sidetrack me from my vocation or sabotage my call,” he said. “So in the spiritual life, how do I recognize and reject that?”

“Being more attentive to the voice of the Lord and rejecting anything that is not of the Lord — that confirmed my call more and more and my confidence in it,” said the priest, who is associate pastor of Sacred Heart Parish in Norfolk, Nebraska. He will take on additional duties at St. Leonard Parish in Madison and St. Peter Parish in Stanton beginning July 1.

He also said he picks up on the signs that help him discern how the Lord is working within other people.

In addition to its seminarian and spiritual direction programs, the Institute for Priestly Formation also conducts retreats for bishops and seminary theologians, days of reflection for laity, theological forums and many other programs.

Looking toward the future, Father Gabuzda said the institute is currently involved in a strategic planning process.

“Our mission has proven to be effective, and we foresee expanding our programs in various ways, but details will be more clear in the fall,” he said.

“A person we’re working with on our plan said, ‘You can look at these 25 years as a good run, or as a runway,'” he said. “I think that captures the spirit. … What does the Lord want us to do in the next 25 years that builds on what we have and actually takes off?”