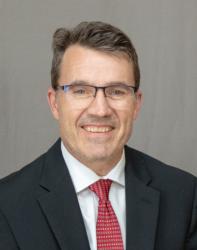 UPDATED – ALBUQUERQUE, N.M. (CNS) — Seminarian Jason Paul Marshall from the Archdiocese of Santa Fe who lost his life in a bus crash in Colorado was “a humble man who deeply cared for others,” said Archbishop John C. Wester in a June 25 statement.

“Jason was a splendid and exemplary seminarian,” the archbishop said. “He always brightened our spirits and had a positive outlook on life. We will miss him very, very much. May he rest in peace.”

Marshall, 53, was one of two people killed in the tragic bus accident June 23 involving the University of New Mexico Aquinas Newman Center’s youth group and their chaperones. The crash occurred 10 miles north of Pueblo, Colorado.

According to the Colorado State Patrol, the bus crashed off an I-25 bridge embankment. The second person killed was the driver, identified as Anthony Padilla, 36.

Archbishop Wester cut short his participation in the annual assembly of the Association of U.S. Catholic Priests in St. Louis to return to the archdiocese to celebrate an evening Mass of healing for the victims of the accident June 26 at the Aquinas Newman Center.

The youth group was returning home from the Steubenville of the Rockies Catholic Youth Conference held June 21-23 in Denver. The summer event and more than 20 others held around the country are sponsored by the Franciscan University of Steubenville in Ohio. The university’s campus is the site of about five of the gatherings.

The surviving bus passengers, youth and adult, were recovering from their injuries, according to a news release from the Santa Fe Archdiocese, which has its headquarters in Albuquerque. Some had been released from hospital; about four remained hospitalized for observation. Only one of the adults was still in serious condition as of June 25, but “her condition has stabilized and is improving.”

Archbishop Wester in his statement asked for prayers for Marshall and Padilla and also asked the community to keep the 13 youth members and adults who sustained injuries, their families and the Lobo Catholic community in prayer.

The archbishop also will be the main celebrant at a memorial Mass for Marshall the morning of June 29 at Our Lady of the Annunciation Church in Albuquerque, where he was a parishioner. His funeral Mass will be in New York where his family resides.

Marshall was the son of Jim and Diane Marshall and the brother of Jill, James and Jeff. Born in Staten Island, New York, he attended the Pontifical College Josephinum in Columbus, Ohio, and was in his second year of theology.

The Denver Post daily newspaper reported that the tour bus was operated by Follow the Sun and said the company was cooperating with an investigation into the cause of the crash. The paper quoted company spokesman Gil Rudawsky as saying Padilla had been in its employ for about a year but had six years’ experience driving buses.

“It is very important that we understand exactly what happened in case there is anything we or the transportation industry as a whole can learn from it,” Rudawsky said in a statement. “We extend our deepest sympathies to the families and friends of both the driver and the passenger. Our prayers are also with those who were injured.”

Colorado Springs’ KKTV-Channel 11 News reported that 14 ambulances and three medical choppers responded to the accident scene. One person was airlifted to the hospital and 12 others were taken by ground. It said five passengers were trapped and had to be freed from the bus, but extricating them needed a cautious approach “as the stability of the bus was in question,” said Pueblo West Fire Chief Brian Caserta.

“Our hearts and prayers go out to the families and friends of the victims of this tragic accident, and we pray for the repose of the souls of those who died,” said Franciscan Father Dave Pivonka, president of the Franciscan University. “We also pray for God’s blessing and healing for all those who were injured.”

Pueblo Bishop Stephen J. Berg said: “I am confident in the assurances I give our suffering brothers and sisters at the Aquinas Newman Center at the University of New Mexico that they have the love, prayerful solidarity, and condolences of the people, priests, deacons and religious of the Diocese of Pueblo.”

He asked that an intercession for those who died and the survivors, friends and family members be part of Sunday Masses in the diocese the weekend of June 29-30.

NEXT: Vatican-Israel accord of 1994 called ‘action’ step for ‘Nostra Aetate’