Vatican-Israel accord of 1994 called ‘action’ step for ‘Nostra Aetate’ 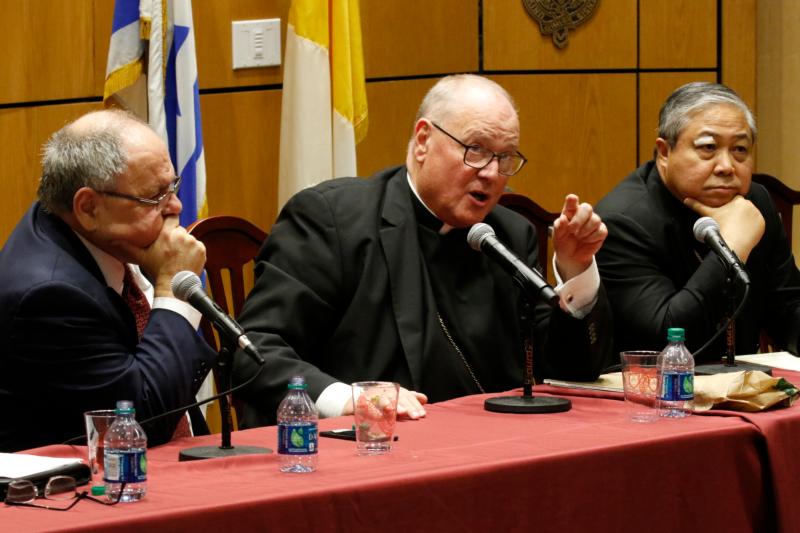 New York Cardinal Timothy M. Dolan speaks June 19, 2019, during a panel discussion on the Vatican-Israel accord. The event at Fordham University’s Lincoln Center campus in New York City was part of a daylong Catholic-Jewish consultation sponsored by the National Council of Synagogues and the U.S. Conference of Catholic Bishops. Looking on are Ambassador Dani Dayan, Israel’s consul general in New York, and Archbishop Bernardito Auza, the Vatican’s permanent observer to the United Nations. (CNS photo/Gregory A. Shemitz)

UPDATED – NEW YORK (CNS) — Jewish and Catholic leaders met in a spirit of joy and cooperation at a 25th anniversary celebration marking the Vatican’s recognition of the state of Israel.

The historic step began with the signing of the “Fundamental Agreement Between the Holy See and the State of Israel,” which established diplomatic relations between the Catholic Church and the Jewish state. The formal opening of relations took place June 15, 1994.

A daylong event June 19 at Fordham University’s Lincoln Center campus to mark the anniversary was sponsored by the Consultation of the National Council of Synagogues, the U.S. Conference of Catholic Bishops and the General Consulate of Israel in New York.

An afternoon panel with New York Cardinal Timothy M. Dolan and three other speakers addressed the significance of the agreement and its transformative effects on Catholic-Jewish relations.

“For both Jews and Christians,” he said, “humanity is on the right path when human agreements mirror the divine will, and that’s what we believe occurred a quarter-century ago, when the leaders of the government of Israel and the church universal signed an agreement stressing reconciliation, trust, the priority of dialogue — all grounded in human rights and religious liberty.

“It makes us Catholics in the United States proud of our church,” the cardinal added, “and, by the way, grateful to be American citizens, as we realize that our country encouraged — well, even pestered — both sides to get this done.”

Also serving on the panel were Archbishop Bernardito Auza, permanent observer of the Holy See to the United Nations; Ambassador Dani Dayan, consul general of the Consulate General of Israel in New York; and Adam Gregerman, associate professor of theology and religious studies and co-director of the Institute for Jewish-Catholic Relations at St. Joseph’s University in Philadelphia.

Co-sponsoring the discussion was the General Consulate of Israel in New York. The moderator was Rabbi David Straus, senior rabbi at the Main Line Reform Temple in Wynnewood, Pennsylvania, and co-chair of the USCCB-NCS Consultation; Cardinal Dolan is the Catholic co-chair.

Participants noted the importance of the Second Vatican Council document “Nostra Aetate,” the Declaration on the Relationship of the Church to Non-Christian Religious. It revolutionized the church’s relations with the Jewish people. Cardinal Dolan said the Fundamental Agreement “gave teeth to ‘Nostra Aetate’, no longer a mere nice-sounding document, but a mandate to action.”

The Vatican-Israel accord “inspires us to continue to dare never to be straightjacketed by apprehensions and hesitancies of the past,” the cardinal said.

The accord was signed during the pontificate of St. John Paul II. Quoting the pope’s personal secretary and “spiritual son,” Cardinal Stanislaw Dziwisz, Cardinal Dolan said “a formal agreement between Israel and the Apostolic See, mainly the exchange of diplomatic relations, was an obsession of John Paul II since the day of his election.” Cardinal Dolan said the pontiff saw it as “a final repudiation of sordid Christian anti-Semitism — and he was right.”

In opening the panel discussion, Rabbi Straus said, “We are true brothers and sisters forever tied together at the root even if straddling different branches.”

Cardinal Dolan said, “I will tell you Catholics in the audience that we have no better friends than our Jewish partners.” He said the Vatican recognition of the state of Israel reflects “the profound love” of the popes since St. John XXIII for Israel and the Jewish people.

He cited three events he said were significant for Christian-Jewish relations but are often overlooked: the visit of Pope Pius X with Theodor Herzl, founder of Zionism; the visit by St. Paul VI to Israel in January 1964, which Dayan called “groundbreaking”; and the visit of Pope Francis to the grave of Herzl in 2014 and the pope’s tribute there.

Those events show “what an incredible journey, spiritually and politically, we have done in a mere 100 years … that amended … so many negative things that have been done during millennia of history,” Dayan said.

Archbishop Auza said “the special character of the relations between the state of Israel and the Holy See” enables them to work together in a special way to protect human life and dignity, to foster religious freedom and to oppose religious intolerance. He added that Israel and the Vatican also are committed to cooperation in “combating all forms of anti-Semitism and racism.”

Gregerman discussed the profound changes and progress in Christian thinking about the Jewish people, from seeing the Jews as rejected by God because they did not accept Jesus, to seeing the Jews as loved by God. Gregerman noted “Nostra Aetate” “rejects any form of hostility to Jews” and calls anti-Semitism “a sin.”

To illustrate how revolutionary these statements were, he noted that they were made only “two decades after the Holocaust, the Shoah … so this is a statement that is to be celebrated.”

Rabbi Joseph Potasnik, executive vice president of the New York Board of Rabbis, who moderated a luncheon panel, told Catholic New York, newspaper of the Archdiocese of New York: “There is a need for a new ‘Nostra Aetate,’ because now hatred confronts all of us, and all of us need to stand strong together to confront that challenge.” Asked which form of hatred he would single out as needing to be addressed, he replied, “The persecution of Christians, which we don’t talk about enough, which is ignored by too many and needs to be addressed.”

McDonnell is on the staff of Catholic New York, newspaper of the Archdiocese of New York.

PREVIOUS: Seminarian killed in crash recalled as ‘humble man’ who cared for others