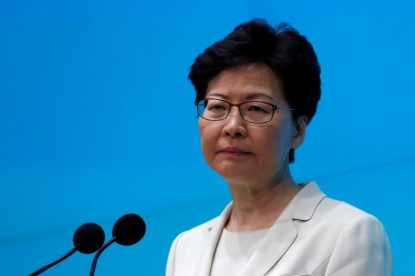 In a June 19 statement, Cardinal Tong and the Rev. Eric So Shing-yit, who leads the council that includes 21 churches, also appealed to the special administrative region government to “launch a thorough independent inquiry” into clashes between police and protesters opposed to the bill days earlier.

The two religious leaders also said they accepted Lam’s June 18 public apology for the conflict over the extradition bill that has provoked mass demonstrations.

Lam first announced June 15 she had suspended the bill that would allow mainland China extradition rights over any Hong Kong resident, including foreign nationals and tourists, ucanews.com reported.

However, Hong Kong residents were not satisfied with Lam’s announcement and turned out in even greater numbers June 16 than the 1 million estimated to have marched on June 9, reported ucanews.com.

In reissuing her apology, Lam told reporters that she accepted much of the responsibility for the “deficiencies in the work of the SAR government over the amendment exercise.”

“This has led to controversies, disputes and anxieties in society. For this I offer my most sincere apology to all people of Hong Kong,” Lam said.

However, Lam did not agree to protesters’ demands to withdraw the extradition bill, retract the characterization of the June 12 protest as a “riot,” seek responsibility from the police over instances of brutality, drop charges against protesters and resign as the city’s leader.

As Lam’s media conference was about to start, the Colloquium of Six Religious Leaders of Hong Kong, which comprises representatives of the Catholic Church, Protestant churches, Buddhism, Taoism, Islam and Confucianism, released a statement to ask Hong Kong people to accept her apology. Cardinal Tong leads the colloquium.

The religious leaders’ statement said Lam had met the religious leaders June 17 and that agreed to listen to criticisms in the future. The colloquium also called on people to return to their daily routines to end the conflict and asked the government to use leniency in meting out punishment to arrested protesters.

Biddy Kwok, president of the Justice and Peace Commission of Hong Kong, believes only that Lam’s resignation can solve the conflict.

“Although she apologized, she did not admit she did wrong and refused to make a correction to withdraw the bill. She only said she will do better in the next three years during her term,” Kwok told ucanews.com.

“She totally ignored the demands of the protesters, such as the complete withdrawal of the bill and to stop charging protesters with rioting,” he told ucanews.com “She also strongly defended the police’s use of excessive force. How can Hong Kongers accept such an apology?”

“The statement asks people to accept Lam’s apology and go back to school and work to stop further conflict,” he said. “But the leaders seem to be ignorant of the source of conflict. The government is the source.”