Cardinal Pell returns to prison to await ruling on appeal 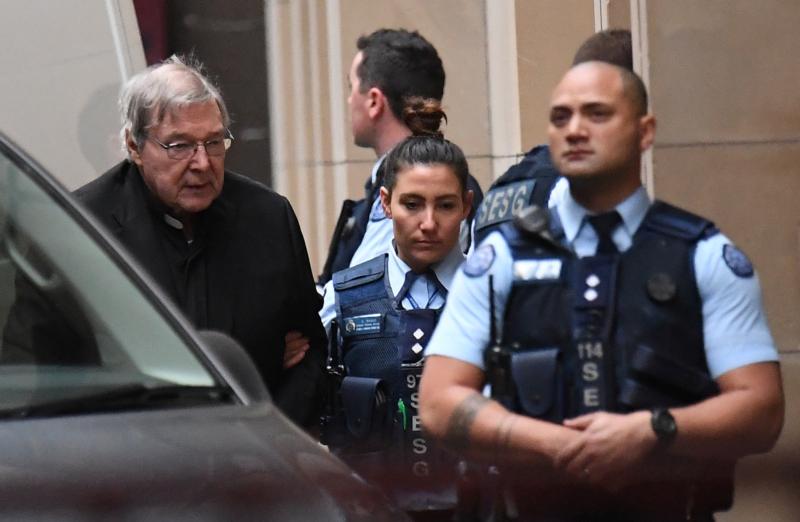 Cardinal George Pell arrives at the Supreme Court of Victoria in Melbourne, Australia, June 5, 2019. Cardinal Pell was at the court for a two-day hearing to appeal his conviction on five counts of child sexual abuse. (CNS photo/Julian Smith, AAP Image via Reuters)

MELBOURNE, Australia (CNS) — Cardinal George Pell was taken back to prison June 6 at the end of a two-day hearing on his appeal of his conviction on five counts of child sexual abuse.

A three-judge panel from the Appeals Division of the Supreme Court of Victoria said it would announce its judgment at a later date, giving no indication of when that would be.

Legal counsel for Cardinal Pell, who will celebrate his 78th birthday June 8 and is a former key adviser to Pope Francis, argued before the judges that: The conviction was “unreasonable” given the evidence presented at trial; the defense should have been able to show an animated video demonstrating how the cardinal could not have been where the victim said he was; and that the cardinal should have been allowed to stand before the jury and enter his plea of not guilty.

Cardinal Pell attended the two-day hearing June 5-6 wearing his clerical collar, which he had not worn at his sentencing hearing in March. Then, he received a six-and-a-half-year sentence after being found guilty in a December 2018 trial of sexually assaulting two choirboys at St. Patrick’s Cathedral in 1996.

The cardinal took notes during the livestreamed hearing and looked relaxed, reporters in the courtroom noted. Cameras were trained only on the bench during the hearing.

Cardinal Pell was accompanied in the courtroom by his close friend, Chris Meaney, business manager for the Archdiocese of Sydney, his niece and several others.

On the first day of the hearing, Pell’s attorney, Bret Walker, argued that there were 13 reasons why it was improbable that Cardinal Pell, then archbishop of Melbourne, had assaulted the boys after presiding over Sunday Mass in the cathedral; a few weeks later he assaulted one of the boys a second time, according to court testimony.

On the second day, prosecuting attorney Christopher Boyce appeared to struggle with questions from three justices presiding over the hearing. But in its written submission the prosecution said: “When looking at the whole of the evidence, the integrity of the jury’s verdicts is unimpeachable.

“The jury were entitled to accept the complainant as a reliable and credible witness,” the submission stated. “He was skillfully cross-examined for two days by a very experienced member of senior counsel. The complainant’s allegations were not improbable when all of the evidence is carefully considered.”

The jury that convicted Cardinal Pell in December was the second to hear the case. The first trial ended in September without a verdict because of a hung jury. The cardinal’s plea of not guilty, video-recorded at the first trial, was played for the jury at the second trail.

At the appeals hearing, the prosecution argued that the surviving victim’s testimony was credible and that the decision of the jury should be respected.

In addition to the arguments presented at the appeals hearing, the three-judge panel can review the trial transcripts and video.

Whatever the panel decides, both the prosecution and the defense can appeal their ruling to the High Court of Australia.

Pell was being incarcerated in Melbourne Assessment Prison, where he has been held since his March sentencing in solitary confinement because of the nature of his crimes and his high profile in Australia. If his appeal fails, he is expected to be transferred to another prison.

The Vatican is conducting its own investigation of the cardinal.

Contributing to this report was Michael Sainsbury in Melbourne and Cindy Wooden in Rome.

NEXT: Church must learn how to speak to young people, pope says