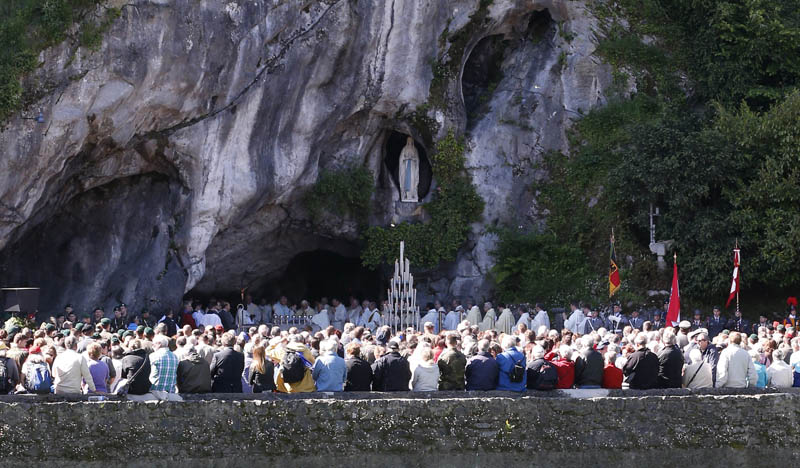 The Shrine of Our Lady of Lourdes in southwestern France is pictured in this May 16, 2014, file photo. Pope Francis has appointed a special delegate for the pastoral care of pilgrims at the Lourdes shrine. (CNS photo/Paul Haring)

VATICAN CITY (CNS) — Pope Francis has named a special delegate for the pastoral care of pilgrims to the French shrine of Our Lady of Lourdes.

Archbishop Rino Fisichella, president of the Pontifical Council for Promoting New Evangelization, announced at the shrine June 6 that the pope had appointed Auxiliary Bishop Antoine Herouard of Lille, France, to the post.

An explanatory note published by Vatican News said Pope Francis had sent Archbishop Fisichella as his “special envoy” to study the pastoral situation at the shrine, which welcomes more than 3 million pilgrims a year.

Promoting spiritual and pastoral outreach at shrines around the world is one of the responsibilities of the Pontifical Council for Promoting New Evangelization.

According to the French newspaper, Le Figaro, the shrine has an annual budget of close to $34 million. It relies heavily on volunteers to care for the hundreds of thousands of sick people who arrive each year seeking healing in baths filled with water from a spring near the grotto where St. Bernadette Soubirous said Mary appeared to her in 1858.

The shrine also employs 330 people, Le Figaro reported, but has struggled with a 30 percent decline in the number of organized diocesan pilgrimages over the past 10 years. An increase of individuals visiting Lourdes has not made up the difference.

According to the website Vatican Insider, Bishop Nicolas Brouwet of Tarbes and Lourdes, whose normal duties include caring for the shrine, hired a new business manager in 2016 to try to balance the shrine’s budget given the drop in pilgrims.

While the business manager did turn the situation around, the website said, “the shrine has risked becoming almost a business and losing its identity as a center of spirituality.”

Andrea Tornielli, editorial director for the Dicastery for Communication, wrote in Vatican News that Bishop Herouard’s appointment is temporary and is focused on Pope Francis’ desire “to accentuate the spiritual primacy over the temptation to overemphasize the managerial and financial aspect.”

The pope, he said, also “wants to promote ever more the popular devotion that is traditional in sanctuaries.”

In fact, Tornielli said, the pope’s letter of appointment asked Bishop Herouard to investigate new ways to ensure Lourdes would “become ever more a place of prayer and of Christian witness corresponding to the needs of the People of God.”

Le Figaro quoted a statement from Bishop Brouwet saying the appointment of a delegate is a demonstration of Pope Francis’ concern for the shrine.

The assistance of a delegate, he said, “is welcome to help us better structure our internal organization and to make us more and more at the service of the pilgrims.”

While Bishop Herouard will “make all the decisions that seem appropriate for the life of the sanctuary,” Bishop Brouwet said, “nothing changes for our diocese.”

NEXT: Cardinal Pell returns to prison to await ruling on appeal