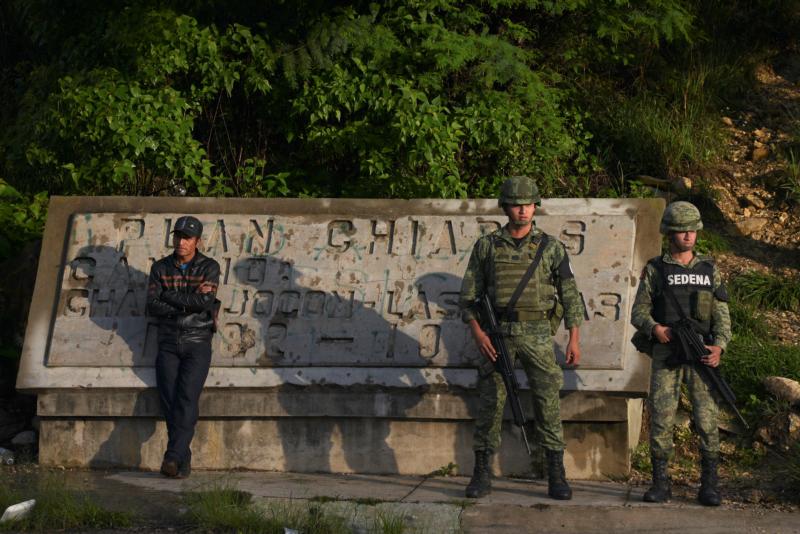 Members of the National Guard keep watch at a checkpoint in Mexico's Chiapas state June 16, 2019. A catechist instructor was shot dead June 15 at Immaculate Conception chapel in Acacoyagua, about 75 miles from the border with Guatemala. (CNS photo/Isabel Mateos, Reuters)

Members of the National Guard keep watch at a checkpoint in Mexico’s Chiapas state June 16, 2019. A catechist instructor was shot dead June 15 at Immaculate Conception chapel in Acacoyagua, about 75 miles from the border with Guatemala. (CNS photo/Isabel Mateos, Reuters)

MEXICO CITY (CNS) — A catechist instructor was shot dead at a chapel in Chiapas state — another example of how the violence consuming Mexico is impacting the Catholic Church.

The attack occurred June 15 in Acacoyagua, some 75 miles from the border with Guatemala, where 30 catechist instructors were finishing a course at the Immaculate Conception chapel, according to Bishop Jaime Calderon of Tapachula. Two young men arrived at the chapel and opened fire on the instructors.

Margeli Lang Antonio, a catechist instructor, was struck by multiple gunshots and died in the attack, Bishop Calderon said. Motives for the crime are unknown, and the assailants remain at large.

The diocese was among “the victims of the generalized violence the country is experiencing,” Bishop Calderon said in a June 16 news conference.

“Our diocesan family will become accustomed to these acts, and we will show our concern for and rejection of these regrettable signs of social and moral decomposition.”

Mexico has experienced increased violence over the past 13 years as the country cracks down on drug cartels and organized crime. But criminal activity continues to spread, and the rule of law remains elusive. The homicide rate in Mexico hit a record high in 2018 and carried over into 2019.

The violence has not spared the Catholic Church, which has experienced attacks at parishes and the murder of priests.

Mexican President Andres Manuel Lopez Obrador has created a militarized police known as the National Guard to calm the country. The guard’s first deployment, however, will be to the Tapachula area in order to slow the stream of migrants coming out of Central America.

NEXT: What’s in a name: Vatican questions use of term ‘viri probati’