What’s in a name: Vatican questions use of term ‘viri probati’ 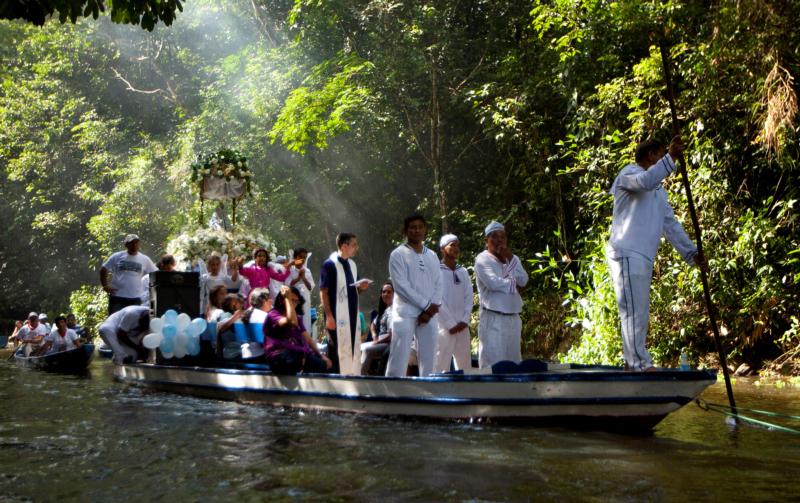 A priest holds a Bible as he leads pilgrims in prayer along during an annual river procession and pilgrimage on the Caraparu River in Santa Izabel do Para, Brazil, in this 2012 file photo. (CNS photo/Paulo Santos, Reuters)

VATICAN CITY (CNS) — While the upcoming Synod of Bishops on the Amazon aims to highlight the damage wrought by climate change and exploitation, the possibility of ordaining married men to minister in remote areas of the rainforest continues to garner more attention.

Among the suggestions proposed in the 45-page working document for the Synod of Bishops on the Amazon, published by the Vatican June 17, was the request “to study the possibility of priestly ordination for elders — preferably indigenous, respected and accepted by the community — even if they have an established and stable family.”

However, when asked why the document did not use the standard church term “viri probati” (“men of proven virtue”) to describe married candidates for the priesthood, Cardinal Lorenzo Baldisseri, general secretary of the Synod of Bishops, told journalists June 17 that he was perplexed at the media’s continued use of the phrase.

“It’s a different thing,” the cardinal said regarding the document’s proposal. “For me, I think (the term ‘viri probati’) is a bit abused.”

In drafting the working document, he said, the secretariat of the Synod of Bishops wanted to emphasize that while the subject of ordaining married men would be studied, the church continues to affirm the importance of celibacy for priests.

Responding to a journalist’s question about ordaining married men, Bishop Fabio Fabene, undersecretary of the Synod of Bishops, said the call for a study on the matter was a direct response “to the suffering of the people, above all those in the most remote areas, due to the lack of the Eucharist.”

He also reminded journalists of what Pope Francis said about ordaining married men of proven virtue during his news conference in January with journalists flying back to Rome from Panama with him.

Pope Francis told reporters that celibacy “is a gift to the church” and that he did not agree with allowing “optional celibacy.”

“My personal opinion” is that optional celibacy is not the way forward, the pope told reporters Jan. 27. “Am I someone who is closed? Maybe, but I don’t feel like I could stand before God with this decision.”

However, on the flight as well as in a previous interview, Pope Francis also said he was open to studying the possibility of ordaining married men for very remote locations, such as the Amazon and the Pacific islands where Catholic communities seldom have Mass because there are no priests.

Pope Francis made headlines in 2017 when he raised the possibility of studying the ordination of married “viri probati,” even though his response fell clearly in line with the thinking of his predecessors.

In an interview with German newspaper Die Zeit, published in early March 2017, the pope was asked if allowing candidates for the priesthood to fall in love and marry could be “an incentive” for combatting the shortage of priestly vocations.

“We have to study whether ‘viri probati’ are a possibility. We then also need to determine which tasks they could take on, such as in remote communities, for example,” the pope told Die Zeit.

Expressing a willingness to discuss the possibility of allowing married men to become priests was hardly groundbreaking; the topic has come up repeatedly at meetings of the Synod of Bishops — especially those held in 1971 and 2005 — and has been discussed by both Pope Benedict XVI and St. John Paul II.

In addition, the Catholic Church already has married priests — thousands of them.

In the Latin-rite Catholic Church in 1981, St. John Paul issued a “pastoral provision” allowing former Anglican priests who were married to be ordained as Catholic priests. Pope Benedict expanded that provision with his 2009 apostolic constitution, “Anglicanorum coetibus,” establishing personal ordinariates for former Anglicans, including married priests.

While married Eastern-rite priests are part of the church’s tradition, when the popes allowed for the ordination of married former Anglican ministers, they did so affirming that the general rule for priestly celibacy in the Latin rite continues.

In the same way, Vatican officials said studying the possibility of ordaining married elders in the Amazon does not call into question the importance of celibacy, but is a call for the church to take a closer look at a possible solution for a specific need.

Bishop Fabene said the call for a study was a direct response to the suffering of indigenous Catholics living in remote areas of the Amazon and, along with promoting indigenous vocations to the priesthood and religious life, is meant “to bring an encounter of the sacramental presence in those communities.”

“It seems pretty clear that this is what the working document intends: to present to the synod fathers this emergency that came from the consultation with the people of God in the Amazon,” he said.