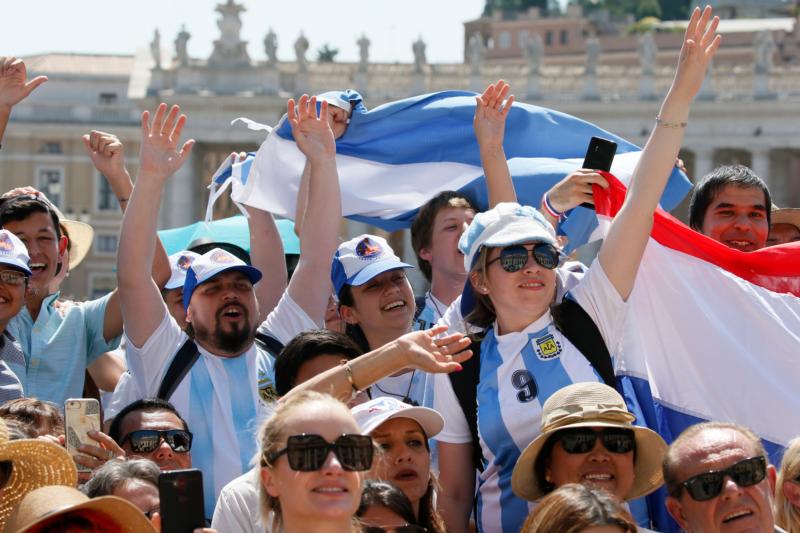 VATICAN CITY (CNS) — To be part of a Christian community is to belong to a group of believers who shun selfishness and give witness to God’s love by loving and caring for one another, Pope Francis said.

While modern society places more importance on “one’s own interests regardless of or even to the detriment of others,” true Christians “ban individualism in order to encourage sharing and solidarity,” the pope said June 26 during his weekly general audience.

“There is no place for selfishness in the soul of a Christian,” he said. “If your heart is selfish, you are not a Christian; you are a worldly person who looks only for your own benefit, your own profit.”

Prior to taking part in the final audience before his summer break, to avoid the scorching Rome heat the pope met indoors with pilgrims who are sick or have a disability.

Outside, continuing his series of talks on the Acts of the Apostles, the pope reflected on the first Christian community in Jerusalem, which was comprised of people who “felt their hearts pierced by the joyful announcement” of Christ’s salvation for all men and women.

St. Luke’s account of this community, he said, provides a glimpse of the “communion of love” that existed and was fortified by listening to the apostolic teaching, sharing their goods with one another, taking part in the Eucharist and prayer.

“These are the attitudes of a Christian; the four signs of a good Christian,” he said.

The grace that comes from baptism, he added, makes “rivalries between young and old, men and women, rich and poor” disappear.

“Baptismal grace reveals the intimate bond between brothers and sisters in Christ who are called to share, to identify with others and to give according to each one’s needs,” the pope said. “This is a way of listening to the cry of the poor — which is very pleasing to God — and of giving him back what belongs to him.”

Pope Francis concluded his talk by asking the faithful to pray so that Christians may emulate the first community and establish a “genuine covenant with God” so that they would become an attractive force that fascinates and “conquers the hearts of many.”

The pope prayed that the Holy Spirit would “make our communities places in which to welcome and practice new life, works of solidarity and communion; places where liturgies are an encounter with God, which becomes communion with our brothers and sisters; places that are open doors to the heavenly Jerusalem.”

NEXT: Many Zambians ‘have nothing to eat,’ so bishops raise money