Doctors are servants, not owners, of life, pope says 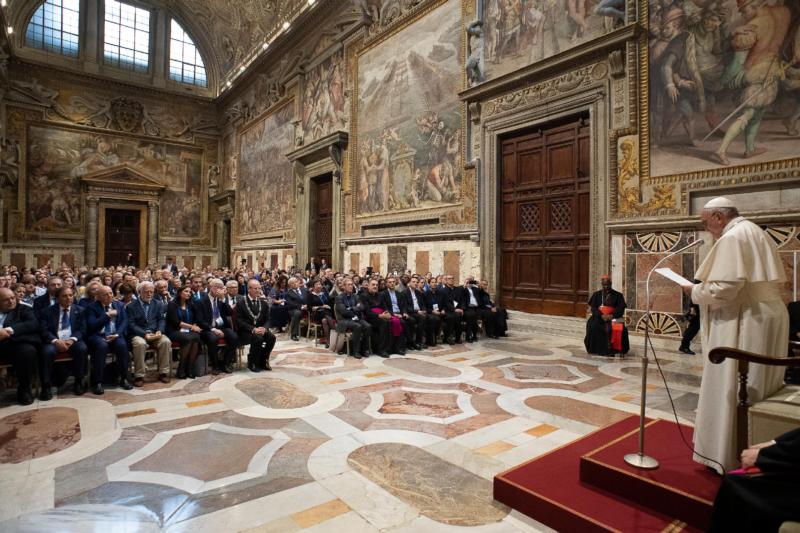 Pope leads an audience with members of the International Federation of Catholic Medical Associations in the Sala Regia at the Vatican June 22, 2019. (CNS photo/Vatican Media)

VATICAN CITY (CNS) — Catholic doctors have a mission to show God’s compassionate love to those who are suffering and to defend life at all stages, Pope Francis said.

While progress has been made in treating patients, medical professionals always must “remember that healing means respecting the gift of life from the beginning to the end,” the pope said June 22 during a meeting with members of the International Federation of Catholic Medical Associations.

“We are not the owners: Life is entrusted to us and doctors are its servants,” he said. “Your mission is at the same time a witness of humanity, a privileged way of making people see, of making them feel that God our father takes care of every single person, without distinction.

Members of the association were in Rome to celebrate the organization’s consecration to the Sacred Heart of Jesus.

Noting that the first Christian communities presented Jesus as a physician, the pope said that Christ’s primary mission was to be close to the sick and the suffering, especially those “who were despised and marginalized” because of their conditions.

“In this way, Jesus breaks the judgment of condemnation that often labeled the sick person as a sinner,” he explained. “With this compassionate closeness, he manifests God the father’s infinite love for his most needy children.”

Jesus, he continued, would approach those suffering from illness and care for them “with sincere love” and heal not only their bodies, but also their hearts through the forgiveness of sins.

Christ would also share “a personal relationship that was rich, not mechanical, not at a distance” with those oppressed by both physical and spiritual illness, the pope added.

“You are called to encourage, to console, to raise, to give hope,” the pope told the physicians. “We cannot be cured and cure without hope; in this we are all in need and grateful to God, who gives us hope.”

The style of Catholic doctors, he said, must be one that “combines professionalism with the capacity for collaboration and ethical rigor” that benefits suffering patients.

“By continually renewing yourselves,” the pope said, “by drawing on the sources of the word of God and the sacraments, you will be able to carry out your mission well, and the Spirit will give you the gift of discernment to deal with delicate and complex situations, and to speak the right words in the right way and with the right silence at the right time.”

NEXT: Be a shepherd, not a mercenary, pope tells Santiago auxiliary bishop