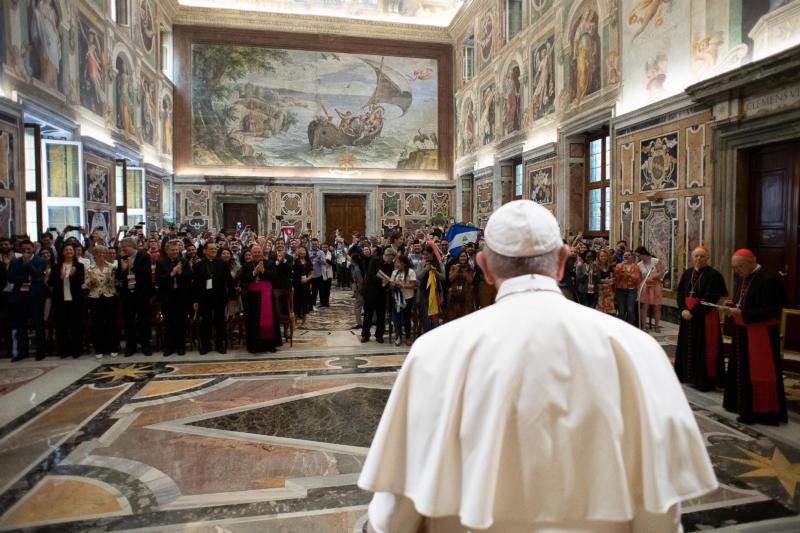 Pope Francis meets with participants attending the International Youth Forum during an audience at the Vatican June 22, 2019. (CNS photo/Vatican Media)

VATICAN CITY (CNS) — Announcing the themes for the next three World Youth Day celebrations, Pope Francis called on young men and women to meditate on the path of Christian life that God has called them to walk.

Meeting with 280 young people from 109 countries who took part in a postsynod Youth Forum in Rome June 22, the pope said he hoped the themes of the World Youth Day celebrations for the next three years will be a “harmonious coordination” between the synod process and the next international celebration of World Youth Day in Lisbon, Portugal, in 2022.

“Do not tune out the voice of God, who urges you to arise and follow the paths that he has prepared for you,” the pope told the young adults.

The Dicastery for Laity, the Family and Life had asked bishops’ conferences around the world to identify two young adult leaders to participate in the forum, which was held at a retreat center just south of Rome.

According to the Vatican, the themes chosen by the pope for the World Youth Day celebrations were:

World Youth Day is celebrated annually on a local level and every two or three years with an international gathering with the pope. The annual Rome diocesan celebration with the pope is on Palm Sunday each year; the date of the celebration in other dioceses varies.

Speaking to the Youth Forum participants, the pope said that like the disciples of Emmaus, who upon recognizing the resurrected Christ set out on a journey to announce what they witnessed, today’s young people also are “called to bring the light of Christ into the darkness of the world.”

“You, dear young people, are called to be light in the dark night experienced by so many of your friends who do not yet know the joy of new life in Jesus,” he said.

He also said that Jesus can be found above all in their communities and encouraged them to return to their homes and spread the Good News like the disciples because “the more we bring him to others, the more we will feel his presence in our lives.”

“The Emmaus account tells us that Jesus lit a fire in the hearts of the disciples. As you know, a fire, if it has not been put out, if it has not turned into ashes, has to spread,” Pope Francis said. “So feed the fire of Christ burning in your hearts, and let it spread!”

PREVIOUS: Receive Communion every time as if it were the first time, pope says

NEXT: Doctors are servants, not owners, of life, pope says