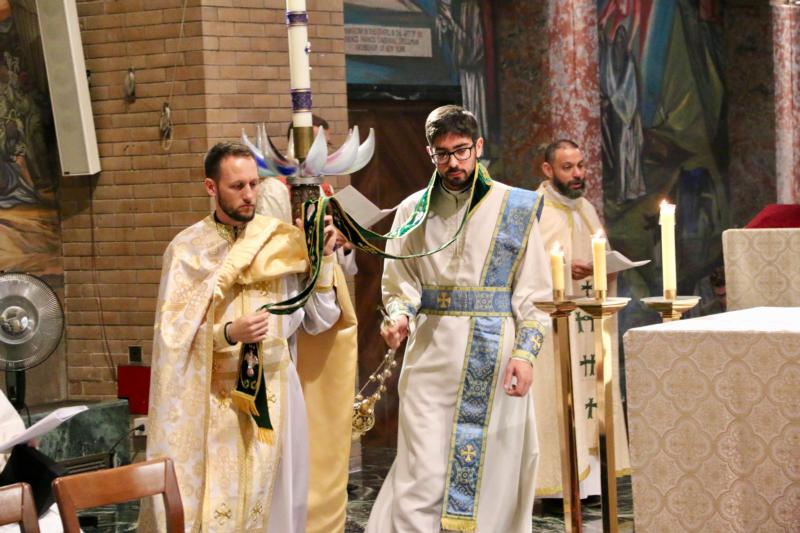 Michael Shami, a seminarian at the Pontifical North American College, is pictured during his ordination as a deacon at the college in Rome June 2, 2019. Shami was ordained as a deacon using the Antiochene Syriac rite of the Maronite Catholic Church. (CNS photo/Denis Nakkeeran)

The ordination of Michael Shami to the diaconate was the first at the NAC in more than 20 years to use the Antiochene Syriac rite of the Maronite Catholic Church. The new deacon said the ritual underlined the church’s universality for his fellow seminarians and highlighted treasures proper to one of the smallest and most ancient Christian churches.

In the Maronite tradition, “there are no great treatises like in the West with Aquinas,” Deacon Shami explained. “Its strength is in its liturgical contributions.”

“Because typology is the primary mode of Syriac theology, it makes a very rich connection between biblical events and historical events and sacramental events and the general life of the believer,” Deacon Shami said.

While most of the altar servers were Latin-rite seminarians of the NAC, who wore their Latin cassocks and albs, many of them had spent three months learning to chant the Syriac prayers and preparing for the demanding liturgy.

“I didn’t see the hodgepodge” of East and West mixing “as an eyesore or lack of uniformity,” Deacon Shami said. “At the same altar, there was a Maronite deacon standing with a Byzantine priest leading him as his sponsor and Latin servers — it kind of encapsulated the true universalism of the church and it was appropriate that it should happen in Rome.”

Preparing for Maronite ministry at a Latin seminary might be unusual, but Deacon Shami was confident it would help him to be a successful witness to his religious heritage in the United States.

“It provided me with an opportunity to try to communicate to a predominately Latin- or even Protestant-minded United States the value of the Eastern tradition in general, specifically our heavy reliance on patristics and sacramental mystagogy,” he said. “It taught me which idioms were helpful for communicating Eastern theology and which were not.”

Deacon Shami said that he had to put in extra effort to remain faithful to his Eastern spiritual heritage while at the Latin-rite NAC, but even those challenges bore fruit with his confreres.

“I would chant my own Office in my room,” Deacon Shami said, referring to the daily prayers of the Liturgy of the Hours. The other seminarians “hearing my voice, hearing me take such great love in my tradition in worshipping God, they themselves turned and looked more into the Western chant tradition.”

In other areas of life at the NAC, East and West did not mix so well. Fasting — not eating meat or dairy products — is at the heart of Eastern spiritual discipline and there are long periods of fasting throughout the liturgical year.

“It was very difficult to fast at the NAC. I tried my best, though,” he said, and there, too, it became an opportunity to share with the Latin-rite seminarians the idea of fasting as an ascetical practice.

The NAC also asked Deacon Shami not to wear his Eastern-style outer cassock, he said, because it would break up the uniformity of the seminarians’ attire. Other challenges were making time to visit Eastern-rite liturgies in Rome that would often conflict with the NAC’s schedule.

Deacon Shami is among the few young Maronite-rite seminarians in the United States. At 25, he is aware that his choice to remain faithful to the Christian heritage of his ancestors is counter-cultural. His own father, for instance, “Latinized” when he moved to the United States.

Like many U.S. immigrants from Lebanon, where the Maronite church is centered, “my father stopped attending (the Maronite liturgy) and simply started going to the local Latin parish” because it was more convenient.

As an adolescent, Deacon Shami said he took an interest in the Syriac language and developed his skills while an undergraduate at New York University.

“In my parish assignment last summer, I offered a free Syriac class and I had attendance of upward of 25-30 persons,” Deacon Shami said. “Even people of other backgrounds, with Italian last names, were coming” because Syriac is close to “the language Christ spoke.”

Deacon Shami completed his stint at the NAC in June and plans to visit Lebanon before returning to the United States for a parish assignment that will last until his priestly ordination in May 2020. As a new priest, he hopes to help revive Maronite traditions that have been lost.

A recent liturgical reform in the Maronite church “had a lot of simplification and elimination,” he said.

“One of them is when the priest elevates the host as he’s offering it, and he recounts all the great patriarchal sacrifices of old, from Abraham and Noah to David on the Threshing-Floor of Ornan,” Deacon Shami explained.

“Those kinds of prayers have been completely eliminated,” Deacon Shami said, because there was an assumption that many of them were “too complex” for people to understand.

“We need to have a reclamation of sorts,” Deacon Shami said.