Ignoring the poor falsifies the Gospel, pope says in message 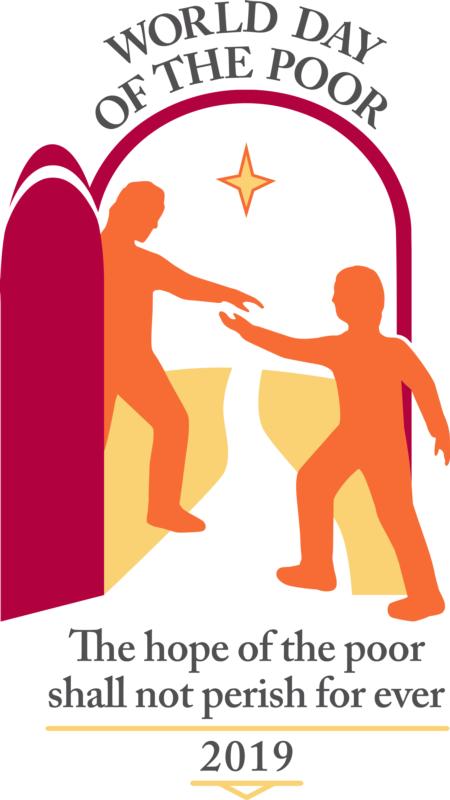 This is the English cover of Pope Francis’ message for World Day of the Poor, which is to be marked Nov. 17. (CNS photo/Pontifical Council for Promoting New Evangelization)

VATICAN CITY (CNS) — Christians must not underestimate the importance of embracing and assisting the poor, oppressed and outcast, Pope Francis said.

Not only did Jesus entrust his disciples with the task of continuing his ministry on earth by giving hope to the poor, but “the credibility of our proclamation and the witness of Christians depends on it,” the pope said in a message for the World Day of the Poor.

“Faced with countless throngs of the poor, Jesus was not afraid to identify with each of them” and tell his disciples “whatever you did to one of the least of these my brethren, you did to me,” the pope said.

“If we refuse to make this identification, we falsify the Gospel and water down God’s revelation,” he said.

“If the disciples of the Lord Jesus wish to be genuine evangelizers, they must sow tangible seeds of hope,” he said in the message, released by the Vatican June 13, the feast of St. Anthony of Padua, patron saint of the poor.

The World Day of the Poor — marked each year on the 33rd Sunday of ordinary time — will be celebrated Nov. 17 this year and, based on Psalm 9:19, will focus on “The hope of the poor shall not perish forever.”

The commemoration and the period of reflection and action preceding it are meant to encourage Christians and people of goodwill “to cooperate effectively so that no one will feel deprived of closeness and solidarity,” the pope said in the message.

Outlining some of the many old and “new forms of bondage that enslave” people in seriously unjust economic or social situations, the pope asked how people could continue to ignore or not be moved by the plight of these people.

The exploited, unemployed, refugees, orphans, minors brutally torn from their parents, people violated in prostitution or by narcotics, immigrants and the homeless all can end up becoming “part of a human garbage bin; they are treated as refuse, without the slightest sense of guilt on the part of those who are complicit in this scandal.”

Judgment is everywhere, the pope said, with people casually deeming the poor to be “parasites on society,” a threat or useless merely because they are poor.

“To make matters worse, they can see no end to the tunnel of extreme poverty,” he added. Yet “we have come to the point of devising a hostile architecture aimed at ridding the streets of their presence, the last places left to them.”

“We can build any number of walls and close our doors in the vain effort to feel secure in our wealth, at the expense of those left outside,” the pope said, but, “it will not be that way forever.”

The day of God’s judgment will come and he “will destroy the barriers created between nations and replace the arrogance of the few with the solidarity of many.”

“The marginalization painfully experienced by millions of persons cannot go on for long,” he said, quoting Father Primo Mazzolari, a 20th century Italian priest dedicated to the poor and the oppressed: “The poor are a constant protest against our injustices; the poor are a powder keg. If it is set on fire, the world will explode.”

Every Christian must respond, he said.

“The love that gives life to faith in Jesus makes it impossible for his disciples to remain enclosed in a stifling individualism or withdrawn into small circles of spiritual intimacy, with no influence on social life,” the pope said.

By being close to the poor, he said, the church realizes she “is called to ensure that no one feels a stranger or outcast, for she includes everyone in a shared journey of salvation.”

“The situation of the poor obliges us not to keep our distance from the body of the Lord, who suffers in them,” Pope Francis said. “Instead, we are called to touch his flesh and to be personally committed in offering a service that is an authentic form of evangelization.”

Offering real hope and compassion as well as sharing Christ’s love with those in need, he said, Christians themselves are “strengthened and confirm the preaching of the Gospel.”

The poor receive genuine hope when they experience warm, loving attention and the promotion of their genuine welfare, he said, not when they see “us gratified by giving them a few moments of our time, but from recognizing in our sacrifice an act of gratuitous love that seeks no reward.”

Archbishop Rino Fisichella, president of Pontifical Council for Promoting New Evangelization, told reporters the pope underlines the importance of matching one’s concern for the poor with concrete and consistent efforts that bring them real hope.

The archbishop said the pope will celebrate Mass in St. Peter’s Basilica Nov. 17 with the poor and volunteers, and he will have lunch afterward with about 1,500 people in the Vatican audience hall. Other volunteer groups will offer free meals throughout Rome that day.

A mobile clinic will again be set up outside St. Peter’s Square Nov. 11-17, with free general and specialist care, he said.

They will also offer a free concert Nov. 9 “with the poor and for the poor” that will feature the Oscar award- winning Italian composer, Nicola Piovani.

The pope’s message in English can be found online here and in Spanish here.