Be men of God, not luxury-seeking diplomats, pope tells nuncios 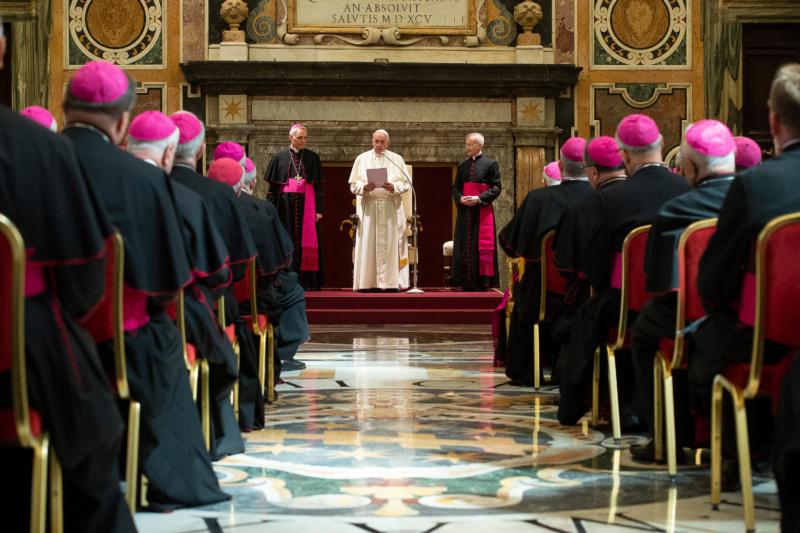 Pope Francis addresses nuncios from around the world during a meeting at the Vatican June 13, 2019. The pope encouraged the Vatican diplomats to be men of God, not luxury seekers. (CNS photo/Vatican Media)

VATICAN CITY (CNS) — Apostolic nuncios are called to be men of faith focused on proclaiming the Gospel and shunning the power and corruption that can come from the luxurious trappings of their diplomatic status, Pope Francis said.

The pope met June 13 with more than 100 Vatican diplomats, who serve either as nuncios — ambassadors — or as the Holy See’s permanent observers at U.N. and other international agencies.

The nuncio represents the pope and while the nuncio, like anyone, may have “reservations, sympathies or antipathies,” a good nuncio cannot be a “hypocrite” and engage in back-stabbing, Pope Francis said in his prepared remarks.

“It is irreconcilable, therefore, to be a pontifical representative while criticizing the pope behind his back, to have a blog or even unite with groups hostile to (the pope), the Curia or the church of Rome,” the text said.

The pope’s words came several days after The Washington Post published an interview with Archbishop Carlo Maria Vigano, the former nuncio to the United States who published a long document in 2018 criticizing the pope and other members of the Curia.

Meeting the diplomats at the Vatican, Pope Francis said that instead of reading the “‘short speech’ of 20 pages” he had prepared, he preferred to have an open discussion with the diplomats “to help you not fall asleep.”

The Vatican press office said the pope’s prepared text was handed to the nuncios; his conversation with them was not broadcast.

In the prepared text, Pope Francis listed a “decalogue” or 10 commandments that should characterize the life of a nuncio, beginning with the principle that they must be men of God who do not allow themselves to give in to petty gossip and slander nor be “deceived by worldly values.”

“The nuncio who forgets to be a man of God ruins himself and others; he goes off track and also damages the church to which he dedicated his life,” the pope said.

A papal representative, he continued, is also a man of the church who doesn’t represent himself but rather the Catholic Church and the pope.

Recalling Jesus’ parable of the unfaithful servant who, upon his master’s delayed arrival proceeds to “beat his fellow servants, and eat and drink with drunkards,” the pope warned the diplomats that they cease being men of the church if they treat their “personnel, the sisters and the community of the nunciature like an evil master and not like a father and shepherd.”

An article published in March by Crux, a Catholic news outlet, detailed allegations by several former employees of the Holy See’s Mission to the United Nations who accused their former boss of mistreating them and of being financially corrupt.

The pope also lamented those nuncios who “search for luxury, clothes and autographed items while living among people deprived of necessities.”

“This is a counter-testimony,” he said. “The greatest honor for a man of the church is that of being a servant to all.”

Another characteristic of a papal nuncio is apostolic zeal in proclaiming the Gospel wherever they are sent and in seeking “the salvation and sanctification of the greatest number of souls.”

“It is dangerous to fall into timidity and the tepidity of political or diplomatic calculations, or even in the ‘politically correct,’ renouncing the proclamation” of the Good News, the pope said.

Reminding the nuncios that they also must be men of charity who concern themselves with caring for the poor and marginalized, Pope Francis said they should avoid the danger of receiving gifts in exchange for diplomatic favors.

Prudence, he said, was a crucial virtue in discerning whether to accept “gifts that are offered to cloud our objectivity and, in some cases, unfortunately, to buy our freedom.”

“No gift of any value should ever enslave us!” the pope said. “Reject gifts that are too expensive and often useless or direct them to charity and remember that receiving an expensive gift never justifies its use.”

NEXT: Ignoring the poor falsifies the Gospel, pope says in message