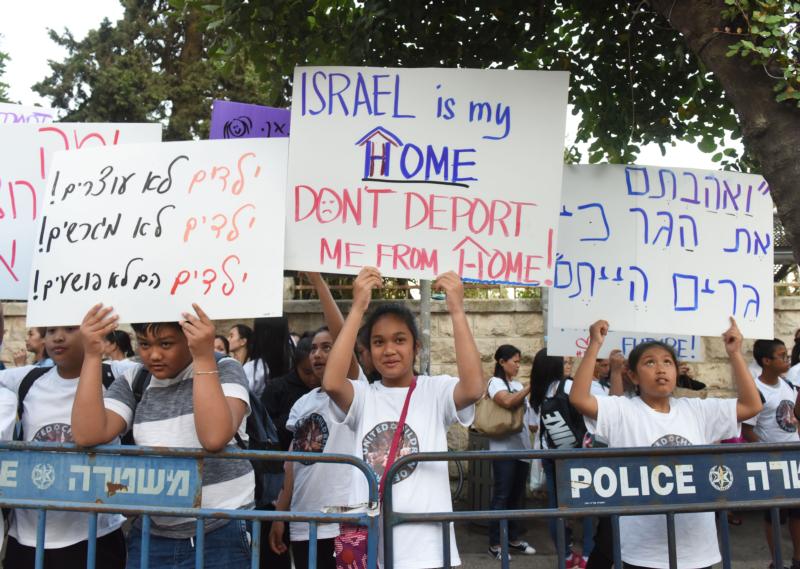 Filipino children demonstrate June 12, 2019, near Israeli Prime Minister Benjamin Netanyahu’s house in Jerusalem. Their signs, in English and Hebrew, say they do not want to be deported. Most of their mothers arrived legally in Israel to work as caretakers for the elderly, but then remained in the country after their work visas had expired and have lived in Israel for up to 20 or more years. (CNS photo/Debbie Hill)

JERUSALEM (CNS) — A group of Philippine mothers and children facing imminent deportation from Israel are finding some solace in their faith, with weekly prayer meetings and counseling from their parish priest and nuns.

Most of the mothers arrived legally in Israel to work as caretakers for the elderly, but remained in the country even after their work visas had expired and have lived in Israel for up to 20 or more years. They have created a life for themselves in Israel, which they believe is better than they could have in the Philippines.

Sister Regina Cobrador of Our Lady of Valor Parish for migrant workers and asylum-seekers in Tel Aviv said several of the mothers who have deportation orders belong to the parish, and they have been coming every Wednesday to the church, where a special group prayer is held for them.

“My heart goes out to them, but sometimes I don’t know what to counsel them. They speak of their fears and concerns for their children who know only the Israeli culture, and the fear about their difficult economic situation,” Sister Cobrador said. “But I also tell them that, from the legal laws of Israel, their children can’t get citizenship, even if they were born here. Israel is very small, so if they would take all the migrant workers who are living here, it would be very difficult.”

Most of the Filipinas are Catholic, and the Latin Patriarchate of Jerusalem has created a Vicariate for Migrants and Asylum Seekers to see to their pastoral needs.

Father Rafic Nahara said the vicariate is trying to be available to those with deportation orders to counsel them about their concerns. However, they are in the country illegally, so there is little more the vicariate can do but help them prepare to return if they are deported, he said.

“(Israel) does have the right to do this. The mothers stayed illegally because they needed work. It is a very complex situation. Of course, people are asking for help, but it will hardly change the Israeli decision,” he said.

He noted that, previously, the Israeli government had reached an agreement allowing children under the age of 5 who were born in Israel to remain, with the understanding that no other such agreement would be forthcoming.

On June 11, some 50 mothers and children demonstrated in front of the Israeli prime minister’s house, calling on him to halt the order and allow their children to stay, at least until they finish high school.

The children at the demonstration held up signs declaring their love for Israel, calling the country their home and asking not to be deported. They also sang Hebrew songs, including the Israeli national anthem.

“We wanted a better future for our children,” said Margie, a Catholic and one of 20 mothers facing deportation in July, with her 9-year-old son and 4-year-old daughter. She asked that her last name not be used.

“The Philippines is a good country, but it is safer here,” she said. “The good schools are very expensive there, and there are drugs and crime and the children end up in the streets. In the Philippines, it is hard.”

Migrant workers from less-developed economies such as the Philippines and Thailand come to Israel to work and earn money to send home. Most are in Israel on five-year work visas, but a good number have risked deportation by staying even after their visas have expired, because the salaries they earn allow them to send their children in the Philippines to study at universities and to build a home there, but also because of the higher quality of life in Israel.

Margie, who is separated from her husband, said even though she is trained as a teacher, she would have to work a whole month in the Philippines to earn the same amount of money as she does in one day cleaning houses in Israel.

According to media reports, there are 1,500 Filipino children in the Israeli educational system, and the deportation orders were coordinated so they would be able to complete the school year.

The Israel Immigration Authority says it is enforcing Israeli immigration law against residents who are living in the country illegally.

Margie, who worships at Our Lady of Valor Parish, said she came to Israel 14 years ago to work as a caregiver for the elderly. She said she was like a family member to the Israeli families for whom she worked. Her visa was cut short when she became pregnant with her daughter; she was told she would need to take her children to the Philippines if she wanted to remain in Israel to work.

She has been getting strength from prayer and speaking with the parish priest, she said, and going to confession.

“When I pray to God, I ask him to give us more strength,” she said. “We love Israel. My kids’ lives are here.”

Neither of her children speak Tagalog; they have never been to the Philippines and do not know the culture there, she said.

“I like my friends and my school here,” her son, Anton, said in Hebrew. He said he wants to go into the Israeli army when he turns 18 and be a soldier like his friends.

“I am an Israeli in every way. I don’t know what it will be like in the Philippines. I don’t want to leave,” he said.

Margie said she has tried to prepare her children for the possibility of leaving the only home they have ever known by talking about the places where she grew up and showing them pictures of the country.

Ellen, who came to Israel as a caretaker 14 years ago, is preparing to leave in July with her 10-year-old son, Umit. His father, who was from Turkey, died when Umit was 5.

Ellen overstayed her visa by nine years and has been working as a nanny and housecleaner to send back money for her four other children in the Philippines.

“It is very hard to find work there, and you make very little money, and I am not young,” said Ellen, who is Catholic. She has already started to pack, she said.

“I pray to God for his help because no one else can help me. I have to be strong for my son. I don’t know what I will do there, but we have no choice.”

Umit, who has been diagnosed with post-traumatic stress disorder because of several incidents when the immigration police entered their apartment, said he has slowly come to terms with the fact that he and his mother will be leaving once school ends.

“It is good for me here. I have lots of friends. I feel Israeli, but what can I do? Life will be harder there,” he said.

NEXT: Be men of God, not luxury-seeking diplomats, pope tells nuncios