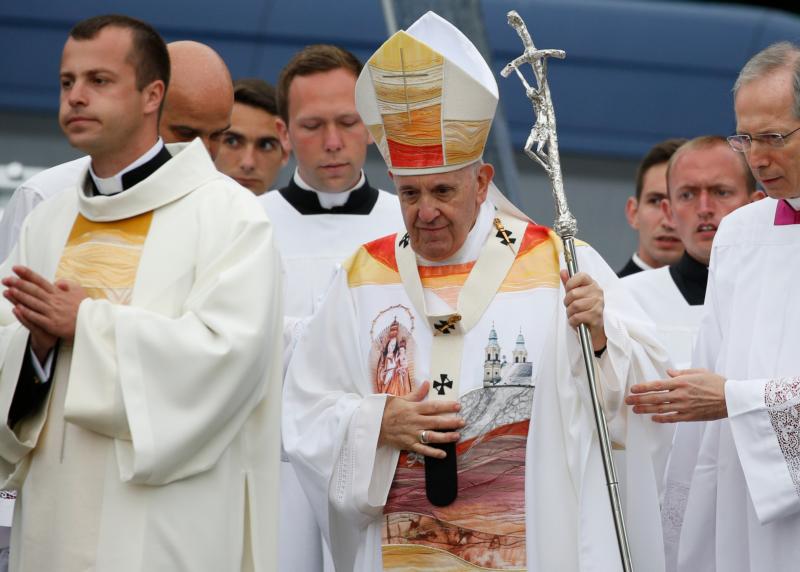 MIERCUREA CIUC, Romania (CNS) — At a Marian shrine in the heart of Transylvania, Pope Francis called on Romania’s Catholics to leave resentments behind and to embark on a journey of unity.

Celebrating Mass June 1 at the Sumuleu Ciuc shrine, an important place of pilgrimage for Romanians and for Catholics from across the border in Hungary, the pope called on the faithful to ask God “for the grace to change past and present resentments and mistrust into new opportunities for friendship.”

“Complicated and sorrow-filled situations from the past must not be forgotten or denied, yet neither must they be an obstacle or an excuse standing in the way of our desire to live together as brothers and sisters,” he said.

Due to severe rain and fog, the pope’s originally scheduled landing at an airport in Bacau and subsequent helicopter ride to the shrine was cancelled. Instead, his plane landed at Transylvania Airport in Targu Mures and he was driven by car to Sumuleu Ciuc.

Tens of thousands of pilgrims wearing colorful raincoats, surrounded by green pine forests clouded by mist, waited for the pope outside the shrine. Rain, mud and fog did little to dampen their spirits as they sang and waved happily awaiting the pope’s arrival.

Among the pilgrims at the Mass were Romanian Prime Minister Viorica Dancila and Hungarian President Janos Ader, who attended “as a simple pilgrim,” the Vatican said.

The dense fog blanketing the trees reminded some foreign visitors of Transylvania’s reputation as the home of Count Dracula, but for Catholics in Romania and Hungary the region is more about the shrine and the Catholic faith.

Although the shrine was built in the early 1800s, the annual pilgrimage to its location dates to 1567 when a Hungarian ruler tried to force Catholics to convert to Protestantism. They resisted, holding to the belief that they were protected by Mary in defeating the prince’s troops.

The statue of Our Lady of Csiksomlyo, the Hungarian name for Sumuleu Ciuc, stands in a nearby Franciscan Catholic Church. It shows Mary standing on the moon, holding an infant Jesus and a scepter. In 1798, a local bishop declared the statue “miraculous” and crowned it. The Vatican has not recognized any miracle related to it, however.

Devotion to Mary has surged since communism fell in 1989, with an annual Pentecost Saturday pilgrimage attracting hundreds of thousands from Transylvania and beyond, including Hungary, Slovakia and Ukraine.

In his homily, the pope said the annual pilgrimage — attended by both Catholics and non-Catholics — is not only part of Transylvania’s heritage that honors Romanian and Hungarian religious traditions but also “a symbol of dialogue, unity and fraternity.”

“To go on pilgrimage is to realize that we are in a way returning home as a people, a people whose wealth is seen its myriad faces, cultures, languages and traditions,” he said.

Recalling the theme of his visit — “Journeying together” — Pope Francis said that going on pilgrimage means “daring to discover and communicate the ‘mystique’ of living together and not being afraid to mingle, to embrace and to support one another.”

“To go on pilgrimage is to participate in that somewhat chaotic sea of people that can give us a genuine experience of fraternity, to be part of a caravan that can together, in solidarity, create history,” he added.

NEXT: Former priest wanted on abuse charges in Arizona arrested in Italy