Catholics, Orthodox must unite against ‘culture of hate,’ pope says 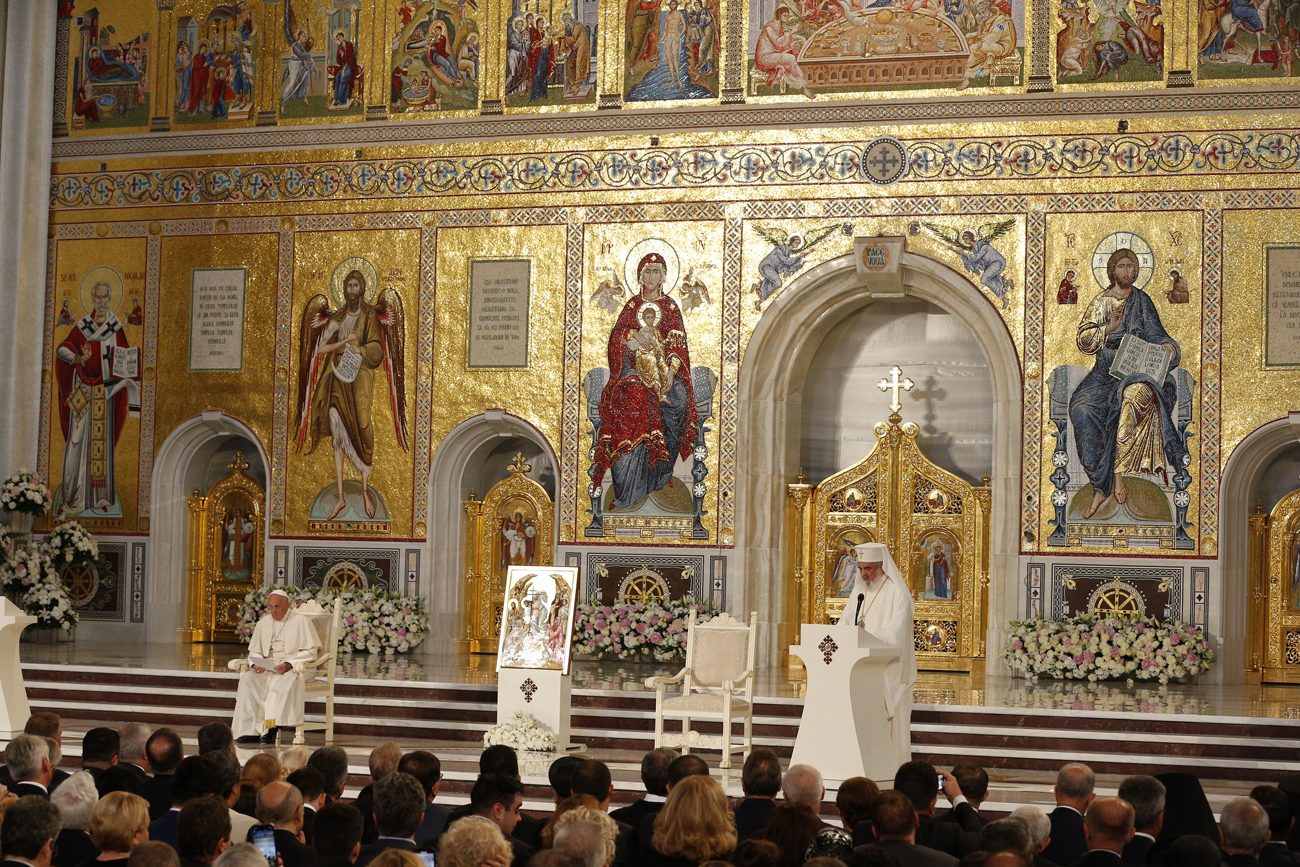 BUCHAREST, Romania (CNS) — In an increasingly globalized world where technological and economic developments have both benefited and excluded many, the Catholic and Orthodox churches must learn to listen to each other and walk together, Pope Francis said.

Meeting with Romanian Orthodox Patriarch Daniel and the Permanent Synod of the Romanian Orthodox Church May 31, the pope said both churches must “go out and engage” with their flocks who fall prey to the uprooting of “traditional values and weakening ethics and social life” that “leads to attitudes of rejection and hate.”

“We need to help one another not to yield to the seductions of an individualistic ‘culture of hate’ that, perhaps no longer ideological as in the time of the atheist persecution, is nonetheless more persuasive and no less materialist,” he said.

After meeting with civil authorities, the pope made his way to the Romanian Orthodox Patriarchate, a palatial structure built at the start of the 20th century and once used as the state congress building.

After the communist takeover in 1948, the building was used as the headquarters of the Great National Assembly. Seven years after the fall of communism, the Romanian Orthodox Patriarchate was allowed to use and eventually own the property.

After warmly greeting each other, Pope Francis and Patriarch Daniel met privately before making their way to the Conventus room. The two leaders sat beneath a plaque commemorating the historic meeting between St. John Paul II and Romanian Patriarch Teoctist in 1999.

In his address to the permanent synod, the pope recalled St. John Paul’s visit 20 years earlier, which he said not only contributed to “renewed relations between Orthodox and Catholics in Romania, but also to the Orthodox-Catholic dialogue in general.”

The dialogue between the two churches, he said, are a “time of journeying together” and rediscovering what unites the Catholic and Orthodox churches.

Both churches, he added, must not hold onto the memories of “wrongs endured and inflicted, of judgements and prejudices that enclose us in a vicious circle and bring only barrenness.”

Instead, the pope said, Catholics and Orthodox must remember that despite their differences, they share a common heritage founded on the first martyrs and confessors of the faith whose holiness was “lived out and witnessed to by so many simple persons who share the same heaven.”

“The remembrance of steps taken and completed together encourages us to advance to the future in the awareness — certainly — of our differences but above all in thanksgiving for a family atmosphere to be rediscovered and a memory of communion to be revived that, like a lamp, can light up the steps of our journey,” he said.

Catholics and Orthodox are journeying toward “a new Pentecost” like the apostles awaiting the arrival of the Holy Spirit who “in the one Spirit and a plurality and richness of languages, bore witness to the risen Lord by their words and by their lives.”

The pope prayed so that both churches receive the grace to “walk beside one another” and that God may “sweep away the hesitation that holds us back from bearing witness together to the new life he offers us.”

“May the Holy Spirit renew us, for he disdains uniformity and loves to shape unity from the most beautiful and harmonious diversity,” he said.

Although he was expected to ride in his popemobile, Pope Francis was driven in a small black vehicle to the People’s Salvation Cathedral, the new Romanian Orthodox Cathedral currently under construction.

Several hundred people lined the streets and the square in front of the cathedral to welcome the pope.

Although the cathedral’s construction is expected to be completed in 2024, the massive interior featured Byzantine iconography depicting key moments in Jesus’ life and adorned in glistening gold leaf.

Pope Francis and Patriarch Daniel recited the “Our Father” each in the language of their respective churches: Latin and Romanian.

Before reciting the prayer, Pope Francis delivered a meditation on the Lord’s Prayer, reflecting on each verse and asking God to grant Catholics and Orthodox “the grace to nurture the shared roots of our Christian identity.

“May it inspire us to be patient cultivators of communion, tireless in sowing seeds of unity, encouraging goodness, working constantly at the side of our brothers,” the pope said. “Without suspicion or reserve, without pressuring or demanding uniformity, in the fraternal joy of a reconciled diversity.”