Lord’s command to ‘welcome the stranger’ is in danger, patriarch says 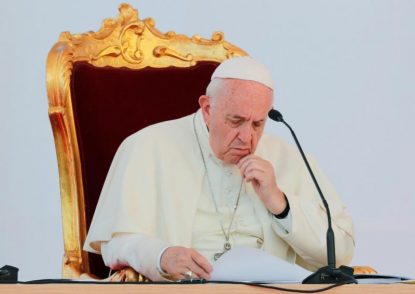 NAPLES, Italy (CNS) — The Mediterranean Sea, which has been and again could be a route for a meeting of peoples and cultures, instead is a “border not to be crossed” between the poor South and the wealthy North, said Orthodox Ecumenical Patriarch Bartholomew of Constantinople.

The efforts of European governments to patrol the Mediterranean and prevent desperate people from reaching its northern shores raise questions “about the very concept of ‘welcoming the stranger’ of which Christianity is the highest expression, according to the teaching our of lord and savior,” the patriarch said.

The Orthodox patriarch’s comments came in a letter to a conference June 20-21 in Naples on theology and the Mediterranean. Pope Francis gave the final presentation at the meeting, thanking Patriarch Bartholomew for his contribution and noting how the patriarch called Christians’ attention to the need to safeguard the Earth “years before” his own encyclical on the topic.

Christians today, the patriarch wrote, must look seriously at the theological questions arising from “the global upheaval of the last century, the various forms of nationalism and fundamentalism still present in too many parts of our world and the tensions ignited over welcoming the weakest, those exposed to social, economic and climatic tensions.”

The Christian obligation to welcome the stranger, he wrote, does not remove the moral obligation to address the root causes of mass migrations of people, which “cause further poverty in the world’s South and the phenomenon of intolerance in those who should be practicing welcome as a dictate of their acceptance of the Gospel.”

Patriarch Bartholomew said he was not talking only about Africa and Europe, but also about the people fleeing Central America and trying to reach the United States, those fleeing Asian countries for Australia and those leaving Eastern Europe for Western Europe.

Universities, he said, have an important role to play in investigating the implications of mass migration, but also in promoting “eco-sustainable” models of economic development and discussing current population shifts without using the fearmongering language of “invasion.”