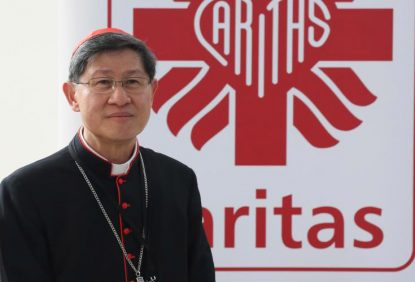 MANILLA, Philippines (CNS) — Church workers in the Archdiocese of Manilla offered their blood as a gift to Cardinal Luis Antonio Tagle of Manila when he celebrated his 62nd birthday June 21.

The gesture was nothing new, said Rowena Ranola, 58, who works with the archdiocese’s Persons with Disability Ministry.

It was Ranola’s fifth time donating blood at what has become an annual drive to celebrate the cardinal’s birthday, ucanews.com reported.

“It’s good to donate blood. Aside from being able to help people, it’s good for the body as well,” said Ranola who encouraged her children and other people to do the same.

The donated blood will be given to the Philippine Red Cross. “It’s really the poor who will benefit from this,” Father De Claro said.

Dr. Ricky Castillo, medical officer of the Philippine Red Cross, said it is healthy to donate blood every three months, explaining that it helps prevent hypertension.

“The blood you donate could save three lives,” said the doctor. He noted that more people donated during this year’s event.

Father Roy Bellen of the archdiocese’s Office of Communications said Cardinal Tagle prefers activities that will benefit others instead of holding a party for his birthday.

“This is a good concrete gift because it will not be for just one day but really help prolong other people’s lives,” said the priest.

“More than (the cardinal), he really wanted people to benefit,” Father Bellen said.
“In fact, his exhortation is for us priests to work for the poor.”

PREVIOUS: Lord’s command to ‘welcome the stranger’ is in danger, patriarch says

NEXT: Pope: Theology begins with sincere dialogue, not ‘conquering spirit’