On the fly: Airport chaplains have special ministry, pope says 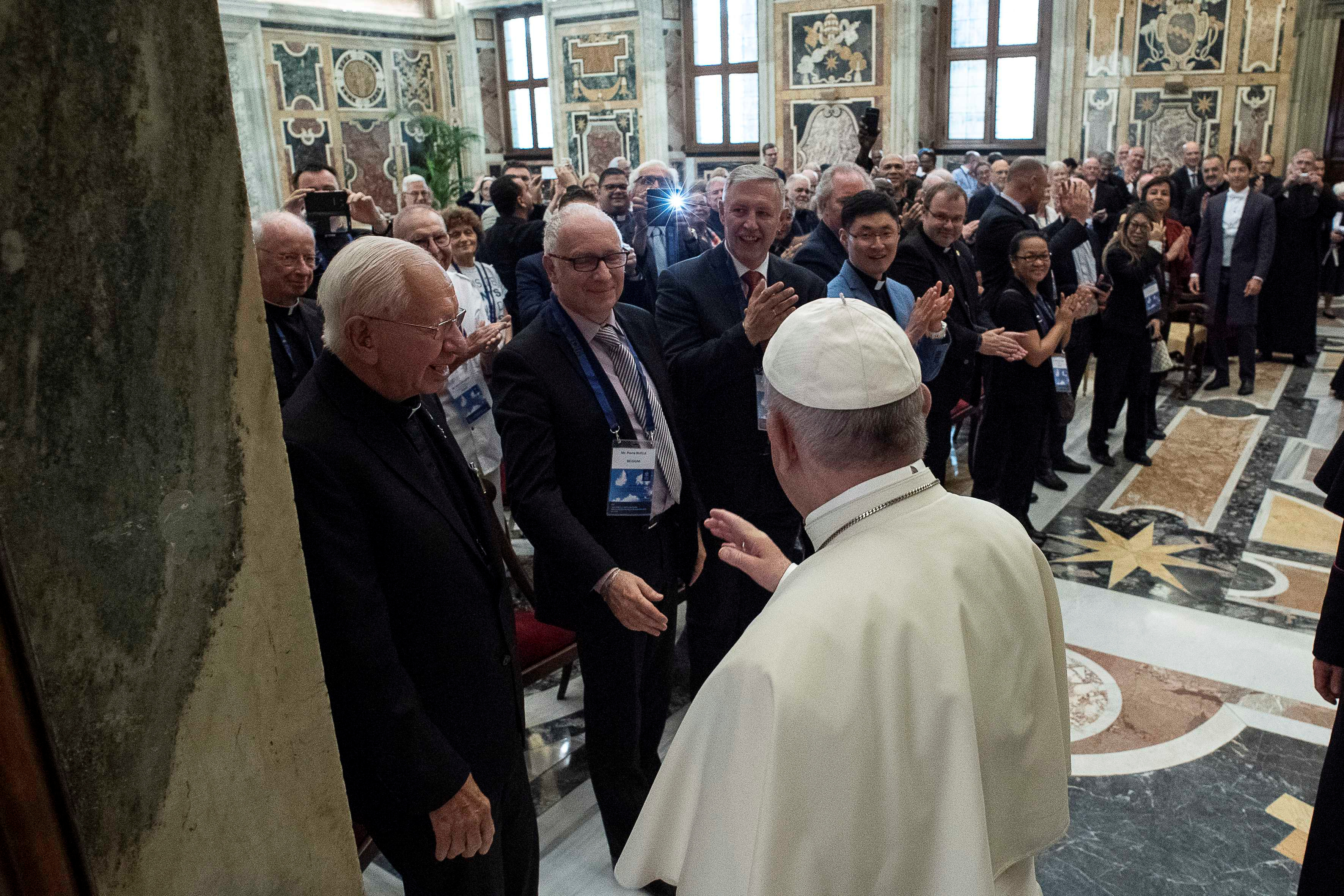 Pope Francis meets June 10, 2019, with Catholic airport chaplains from around the world attending a seminar in Rome. (CNS photo/Vatican Media handout via Reuters)

VATICAN CITY (CNS) — From pilots and passengers to refugees and fast-food workers, the people airport chaplains meet each day all deserve a kind word and an invitation to a relationship with God, Pope Francis said.

“Technological advances, a frenzied pace of activity and a constant flow of people all tend to create an atmosphere of anonymity and indifference in airports,” Pope Francis told more than 90 airport chaplains — priests, deacons, religious and laypeople — meeting in Rome June 10-13.

Pope Francis told the chaplains the story of a businessman he knew who said he had gone into an airport chapel looking for an outlet to charge his computer.

The lay chaplain asked if he needed anything and when the businessman explained why he was there, the chaplain told him he was welcome since the electricity, “like the energy of God,” was there for everyone.

As the two kept talking, “that man felt something change in his heart,” the pope said. He bought a Bible and still today, “years later,” continues to read it “to encounter again that Jesus he met in the airport.”

Each day in airports around the world, he said, “millions of people of different nationalities, cultures, religions and languages daily cross paths with one another. Each has his or her own story, known only to God, with its joys and sorrows, its hopes and troubles.”

“In this setting,” he told the chaplains, “you are called to bring the message and presence of Christ, who alone knows what lies hidden in the heart of each person, and to bring to everyone, whether Christian or not, the good news of God’s tender love, hope and peace.”

Pope Francis said it was interesting how airports can be “a kind of ‘free zone'” where people “can feel at ease in opening their hearts, entering into a process of healing and making their way back to the house of the Father, which for various reasons they may have long since left behind.”

Special concern must be shown for “the migrants and refugees who arrive at major airports in the hope of seeking asylum or finding shelter, or who are stopped in transit.”

While civil authorities have direct responsibility for those people, Pope Francis said it is part of the chaplain’s pastoral responsibility “to ensure that their human dignity is always protected and their rights safeguarded, in respect for the dignity and beliefs of each.”