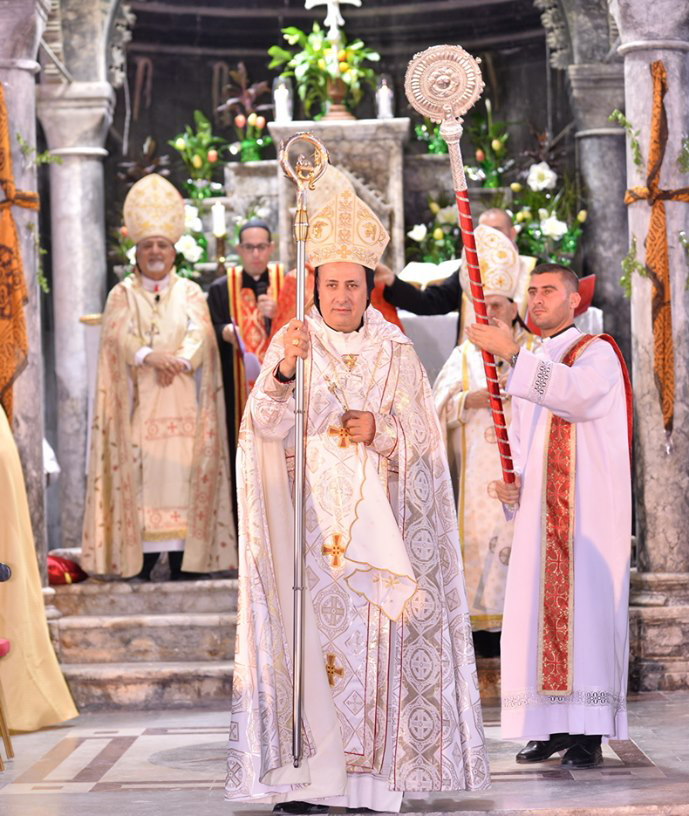 Syriac Catholic Auxiliary Bishop Nizar Semaan is seen during his June 7, 2019, episcopal ordination Mass at the Church of the Immaculate Conception in Qaraqosh, Iraq, his birthplace. He previously served as a priest for 14 years in London. (CNS photo/Syriac Catholic Patriarchate)

Bishop Semaan chose the Church of the Immaculate Conception in Qaraqosh, Iraq, his birthplace, as the site of his episcopal ordination June 7.

Still scarred from the Islamic State group and not yet fully restored, the church, Bishop Semaan said, is “a symbol of what happened to our cities and villages in 2014 until the liberation (in 2017) from ISIS.”

It’s also the church where the new bishop was ordained a priest in 1991.

Located in the Ninevah Plain, Qaraqosh was the largest Christian city in Iraq. Its 50,000 residents — all of them Christian — were expelled by Islamic State forces in a single night during the summer of 2014. They were among 120,000 Christians uprooted from Mosul and the Ninevah Plain that summer.

Yet he is optimistic.

“I’m sure with the help and prayers of many people who are interested in the Christians of Iraq, we will carry our mission and we will go ahead for a brighter future,” he said.

In his homily during the ordination Mass, Syriac Catholic Patriarch Ignace Joseph III Younan acknowledged the challenges facing the church in northern Iraq. Pointing to the “terrible calamity” that affected “the most precious diocese in our Syriac Catholic Church,” he said his people’s resilience is “an example of the heroic testimony and the steadfastness in the face of the evil forces that wanted to kill hope in your believing souls.”

The patriarch noted how parishioners “carried the cross,” following the example of Jesus. “Your hope has won the admiration of the faithful around the world, in the East and West.”

Bishop Semaan, who spent 14 years as a priest in London, said he plans to focus on building: not just in the physical sense with new construction, but especially restoring relationships among Iraqis and to work on healing “the psychological and spiritual injury of our people.”

“It wasn’t easy for our people, who lived here their entire life and in one night, suddenly, immediately they lost everything, and found themselves without a piece of bread to eat, sleeping in the street, to be forced to live as refugees in the north, Ankawa, Kurdistan, Irbil,” he said.

Such horrific trauma, he explained, left deep wounds in people’s hearts and minds.

Stressing the pastoral role of priests and bishops, he said that establishing peace, political stability and security in Iraq is not in the hands of the church.

“For this, we need the help of the international community,” to put pressure on the Iraqi government so that people can live in dignity, with democracy and respect for human rights, he said.

Without security, Bishop Semaan noted, it is difficult for Christians to be expected to stay in Iraq and restart their lives. Likewise, he said, the lack of security hinders economic investment.

He urged Christians in the West to encourage their government “to look at the situation of Christians in Iraq and try to find a political solution.”

“We need their support and prayers, as well as economic help,” Bishop Semaan said.

While touring Qaraqosh before his installation, the new bishop said he was struck by how, in two years, the community was able to rebuild again, citing as evidence numerous homes, shops and restaurants.

More reconstruction is needed, Bishop Semaan told CNS, and for that the Christian community in the region must depend on the continued help from international charities and church groups.

Although there are no exact figures, Bishop Semaan said about 20,000 people have returned to Qaraqosh, where he will be based initially.

Bishop Semaan said his return to Iraq is grounded in the hope “that Christianity will flourish again in Iraq, and every Christian will play his positive role in rebuilding the new Iraq.”

“Everyone around the world should care about what is happening to the Christians of Iraq,” Bishop Semaan said, adding that without help, “in 20 years we will vanish from here.”

In 2003, about 1.5 million Christians lived in Iraq. Their presence dates to apostolic times. Now that number has dwindled to about 250,000, according to international observers.

For his motto as bishop, Bishop Semaan chose Galatians 5:22: the fruit of the Spirit is love, joy, peace, patience, kindness, generosity, faithfulness. “Most important is peace and patience,” he said.

He said he hopes to bring that inspiration to the people of Iraq.

“If you look at the faces of our people and what they endured, you can see the sadness in their eyes,” he said. “They need a happy person.”

PREVIOUS: Pope says he wants to visit Iraq in 2020

NEXT: On the fly: Airport chaplains have special ministry, pope says