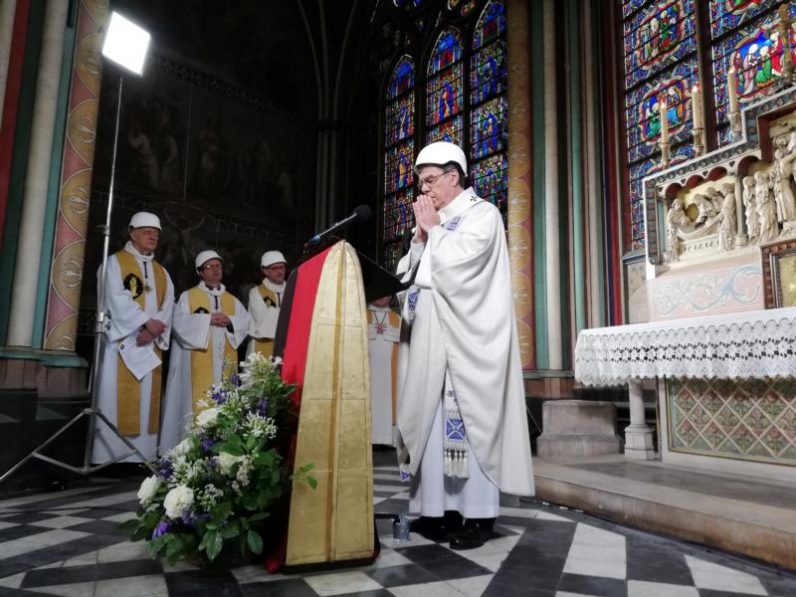 Archbishop Michel Aupetit of Paris celebrates Mass in the Chapel of the Virgin inside Notre Dame Cathedral June 15, 2019. It was the first Mass since a huge blaze devastated the landmark building in April. (CNS photo/Karine Perret, pool via Reuters)

PARIS (CNS) — The archbishop of Paris wore a hard hat as he celebrated the first Mass in Notre Dame Cathedral since a huge blaze devastated the landmark building in April.

The Mass was celebrated in the Chapel of the Virgin June 15 by Archbishop Michel Aupetit to mark the anniversary of the consecration of the cathedral’s altar, an event that usually takes place June 16 each year.

About 30 invited guests — mostly clergy, cathedral employees and building contractors — wore protective headgear because of dangers of falling masonry, although the Virgin chapel, situated behind the choir, had been designated as safe.

In his homily, Archbishop Aupetit did not mention the fire but stressed the purpose of Notre Dame as a place of Christian worship, and not an ornament of the secular state.

He said the building could never be reduced to a cultural or “patrimonial good” and warned the congregation that if Jesus was removed as the cornerstone, it would collapse in a spiritual rather than a physical sense.

The cathedral would simply be an “empty shell, a jewelry box without riches, a skeleton without life, a body without a soul,” the archbishop said.

“The cathedral is born of the faith of our ancestors,” he said during the Mass, which was broadcast by KTO, a French Catholic TV channel.

“This cathedral is born of the Christian hope, which perceives well beyond a small self-centered personal life to enter a magnificent project at the service of all, projecting well beyond a single generation.”

“It is also born of charity since, open to all, it is the refuge of the poor and the excluded who found there their protection,” he added. “Are we ashamed of the faith of our ancestors? Are we ashamed of Christ?”

The cathedral was most significantly a mirror of “the living stones” of the members of the church who worship there, he said.

“You only have to look at the abysmal religious ignorance of our contemporaries because of the exclusion of any divine notion and the very name of God in the public sphere by invoking a secularism that excludes any visible spiritual dimension,” he said.

The cathedral has been closed since April 15, when it was engulfed by fire that destroyed its spire and much of its vaulted ceiling.

French President Emmanuel Macron wants the cathedral rebuilt in five years, but Culture Minister Franck Riester told French radio June 14 that so far just 80 million euros of the 850 million euros pledged has been received, with most of it coming from small donations.

He said the cathedral, originally built in the 12th and 13th centuries, remained in a “fragile state,” with unsecured sections of the vaulted roof still in danger of collapse.

PREVIOUS: Bishop to remain with Hong Kong protesters ‘no matter how long they stay’