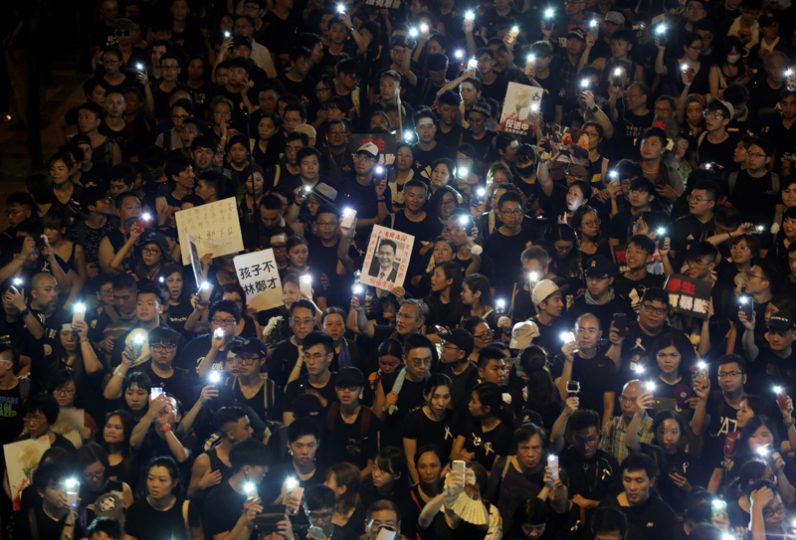 Protesters attend a demonstration June 16, 2019, demanding Hong Kong’s leader to step down and withdraw extradition legislation. Although chief executive Carrie Lam announced June 15 that she had suspended the bill, Hong Kong residents were not satisfied; an estimated 2 million people turned out for the march. (CNS photo/Athit Perawongmetha, Reuters)

HONG KONG (CNS) — As massive protests continued in Hong Kong, the auxiliary bishop pledged to remain with those opposing a controversial extradition bill and the resignation of the Chinese territory’s leader.

Although chief executive Carrie Lam announced June 15 that she had suspended the bill, Hong Kong people were not satisfied and turned out in even greater numbers June 16 than the 1 million estimated to have marched on June 9, reported ucanews.com.

The Civil Human Rights Front estimated that about 2 million people joined the latest rally — a record for a protest in Hong Kong — but police claimed only 338,000 attended.

Asked by media at midnight whether he would leave the young protesters, the 60-year-old bishop said: “I don’t care. No matter how long they stay, I will continue to stay with them. The shepherd should not just be with the sheep but also guide them.”

Bishop Ha reminded the faithful that the protesters were Christians first.

“Even though the government did many things that we don’t like and were very wrong, we cannot demonize them, because this is not our faith request,” he said.

In his homily at a Mass June 16, Cardinal Joseph Zen Ze-kiun, retired bishop of Hong Kong, thanked God that Hong Kong has so many people who care about justice.

“Although we won this battle, we need to continue to use peace, love and justice to arouse society, and Christ will stand by us,” he said.

The pressure on Lam increased June 17 when Hong Kong’s most prominent student activist, Joshua Wong, was released from prison and immediately called for the chief executive to step down.

Wong, 22, who received two separate prison sentences in 2017 and 2018 for his part in the Umbrella Movement pro-democracy protests in 2014, walked free after serving a reduced sentence of one month.

Edwin Chow, acting president of the Hong Kong Federation of Catholic Students, told ucanews.com that Lam had supported the use of excessive force by police in a June 12 rally, but he hoped that religious elements could moderate the emotions of protesters and police.

Protesters are concerned that the proposed bill could be used by Beijing to extradite people from Hong Kong on politically motivated or business charges.

“There have been cases when Hong Kong people were charged with smuggling when they transferred Bibles to mainland China. I am afraid it will affect the communication between the churches on both sides. That’s why I am against the amendment,” Chow said.

The Hong Kong government released a statement June 16 saying that the chief executive had apologized and admitted that “deficiencies in the government’s work had led to substantial controversies and disputes in society, causing disappointment and grief among the people.”